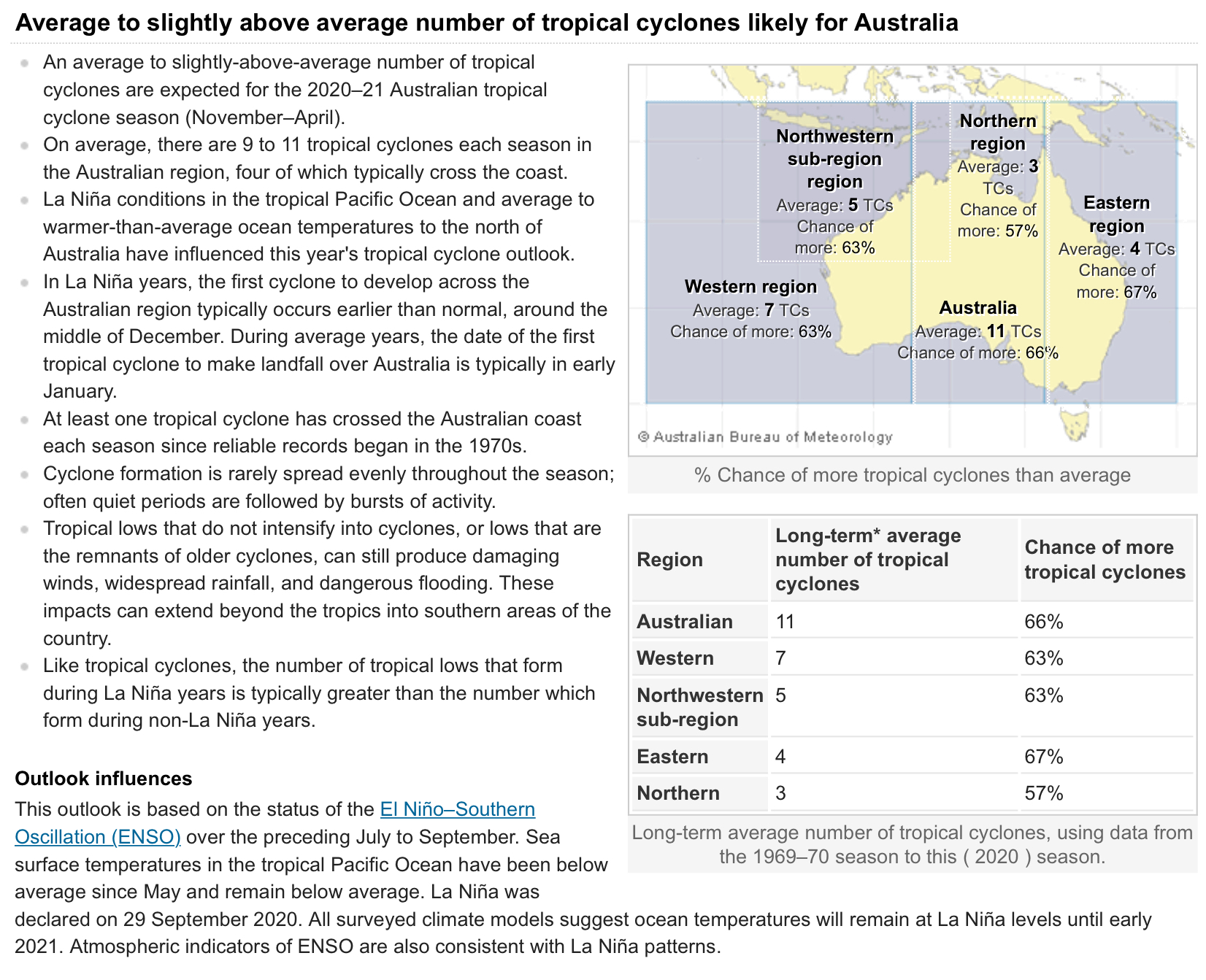 Yay for the 2020/21 wet season thread! I'm so excited guys. Bring on December and lets get this party started

Increased monsoonal activity generally indicates an increase of the chances of a Tropical Cyclone forming,
The possibility of a pre Xmas Cyclone somewhere in Australian waters is real if as, the predictions seem to say, the Monsoon is a bit earlier this season.
Reactions: Claude Cat, StormyLee, Flowin and 2 others

You must be an east coaster
Reactions: youcantbecirrus, Claude Cat and Orebound
Y

EC having a stab for a pre-Xmas West Coast cyclone

GFS has a system on its 12Zrun, but dry air is seen to wrap and inhibits further development after tau252. Very far ahead though so lets see if it gets it very wrong or very right. 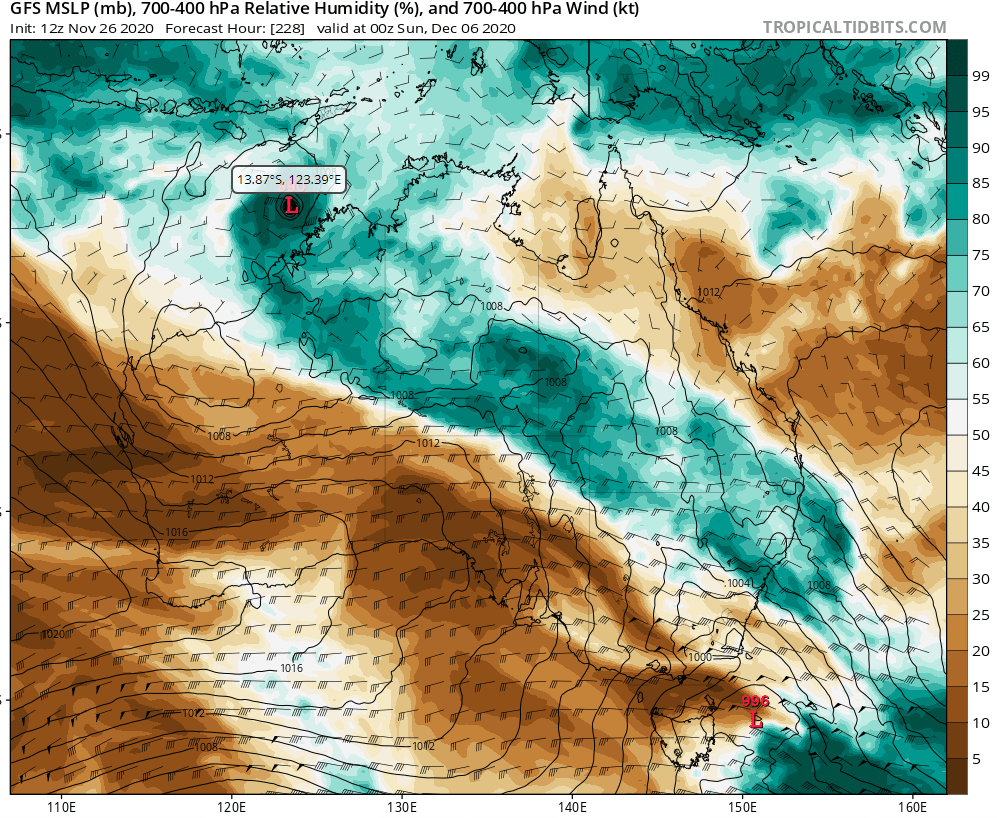 Edit: Would love to know where all the weatherzone members fled off to after it shut down. Loved the TC forums there. I recognise Flowin
Reactions: Flowin and StormyLee
Y

_Yossarian_ said:
EC having a stab for a pre-Xmas West Coast cyclone

Yeah GFS is also still promoting the idea of developing a disturbance originating to the north of Darwin, there is varying degrees of support from within its ensemble.

SST temps are fairly primed, plus forecast heatwave conditions for the next week will at least maintain if not increase: 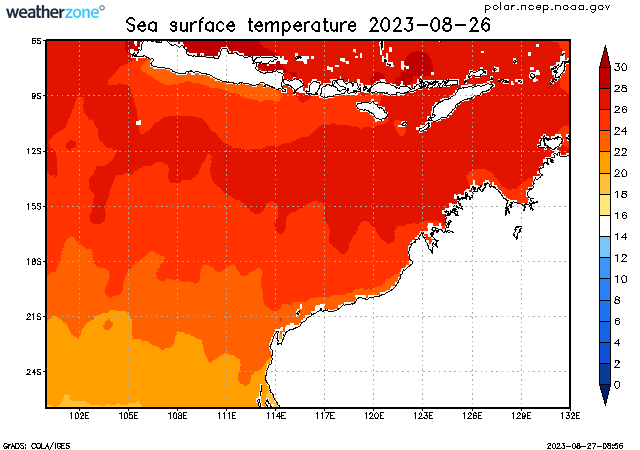 Looking like EC progs a 'clone for NW shelf next week. First of the season perhaps?
Reactions: StormyLee and AshestoAshes
L

Becoming favorable for development up off the top end

What concerns me though is that the tropical activity is focused in NW Australia and out wide in the coral sea, but nothing significant over NE Australia. A quick look at least 7 days cloudiness: 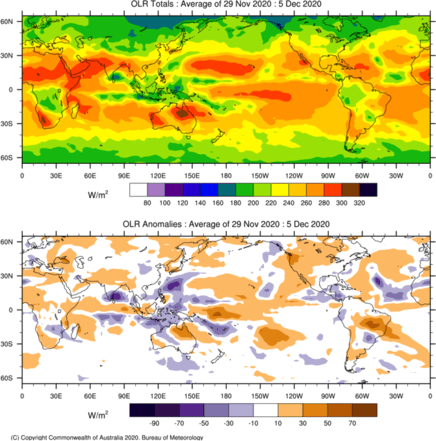 Finally we are seeing something more like expected in La Nina (-veIOD) with clouds gathered to the north of Australia and nothing much in West Indian or central to East Pacific. This is only 7 days, and MJO is currently in a favourable location. But La Nina means MJO is likely to stay favourable for much greater portion of the cycle. However there is a weird clear spot over NE Australia almost joined with the typical clear area along equatorial Pac.

Going back to winter we see cloudiness north of Australia is not at all La Nina like with clouds stronger in west Indian and NE Pacific. Strong suppression of cloudiness is visible along equatorial Pacific. While early in the year and ahead of a La Nina being declared other La Nina years typically have enhanced cloudiness near Australia from winter (but small dataset only going back to 2001) 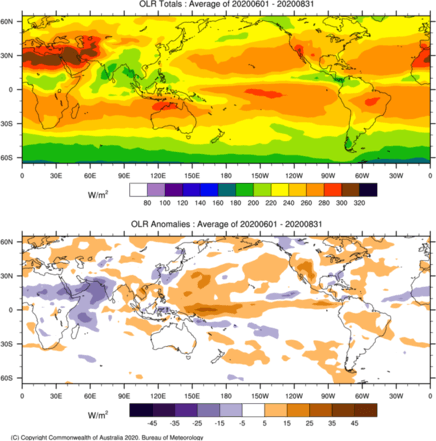 For Spring the situation has improved a little, but the Indian ocean seems balanced with equal anomalies between West and East. Also cloudiness anomalies near Australia seem lopsided N-S, being much stronger in Northern Hemisphere. 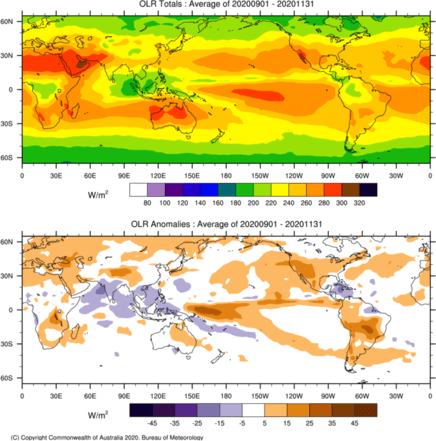 It's early days yet.
Reactions: AshestoAshes

A few things brewing to the left and right
Reactions: Flowin

00z ec had a brown ocean affect flavor going on with the top-end low.
Reactions: Claude Cat and Flowin

Todays 00z shifted the low west of the previous run. Still showing the brown ocean affect ie strengthening the low whilst overland. This low as-per the model with overland strengthening suggests there will be a strong monsoon flow into the low. Moisture flux's.

This type of system in oz unless it forms while over water don't get classified. Noaa now days in the ATL classify these as td's when they form overland.
Reactions: Flowin 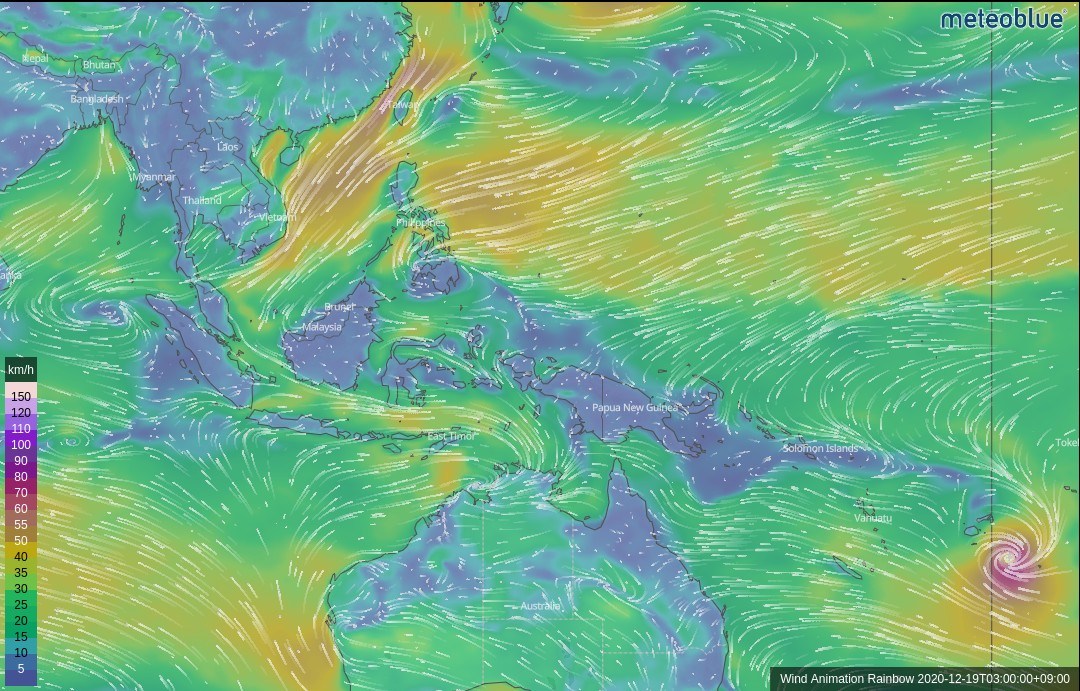 Monsoon flowing from N-H as per the norm.
Reactions: StormyLee, Claude Cat, PeteJ and 1 other person

Cyclone or just a very strong inland low?
Looks to be affecting central Australia and the SE through Monday and Tuesday.

Thinking it will be ts wind wise. Due to friction would not think much over 100kmph ,but wont to be classified as such overland. 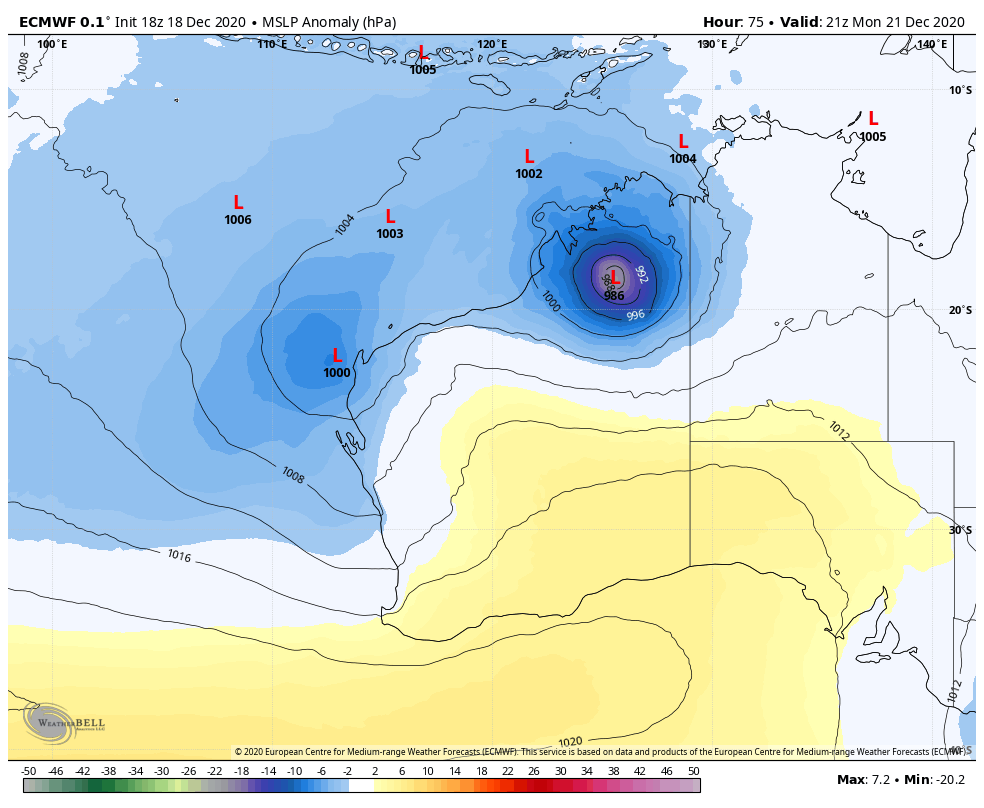 CCKW said:
Thinking it will be ts wind wise. Due to friction would not think much over 100kmph ,but wont to be classified as such overland.

Delivering in rain in buckets already.

Geographically widespread 100mm+ total overnight, Lombadina community on the NW of the Dampier Peninsula already passed 140mm in the few hours from 0900-1200 today.

Looking at the semi stationery rain band & infeed over next 48 hours, think a few places will see over 500mm out of the system, even if the recording stations are few & far between. Cygnet Bay, just to the east of Lombadina already collected over 400mm out of the previous system earlier in month.
Reactions: CCKW and Claude Cat

Geographically widespread 100mm+ total overnight, Lombadina community on the NW of the Dampier Peninsula already passed 140mm in the few hours from 0900-1200 today.

Looking at the semi stationery rain band & infeed over next 48 hours, think a few places will see over 500mm out of the system, even if the recording stations are few & far between. Cygnet Bay, just to the east of Lombadina already collected over 400mm out of the previous system earlier in month.
Click to expand...

The following Watches/Warnings are current:

This tropical low looks good! Appears to be an overland eye on the latest sat pass.

The usually very dry Giles in WA has had a spectacular December. 128mm MTD!

When is Queensland going to get a monsoon?
Reactions: Rainbow Serpant

Stumer1 said:
When is Queensland going to get a monsoon?
Click to expand...

There is literally hundreds of 850mb meridional flow and zonal wind forecast plots covering north and south of the EQ on the net. With all your own local experience and the collective QLD forum knowledge of incoming mt setups which would be a few hundred years if all added up i guess tell us.
Reactions: StormyLee

Hermon said:
The usually very dry Giles in WA has had a spectacular December. 128mm MTD!
Click to expand... 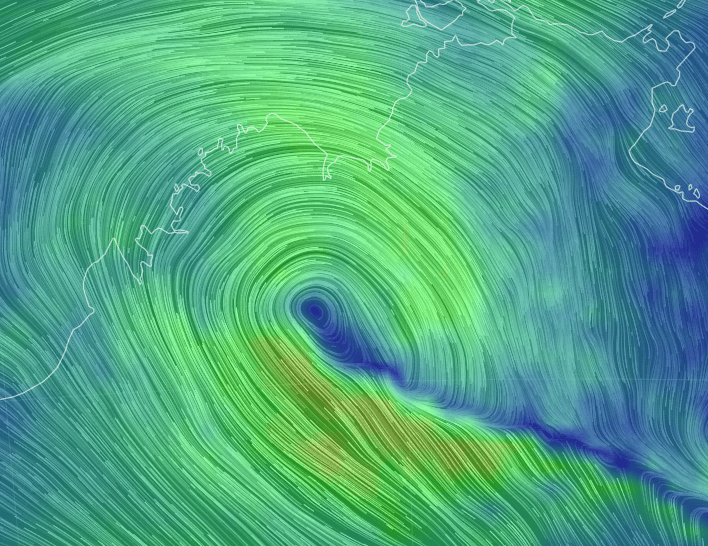 What was surprising is the 200mb showing it reached all the way up there weakish up there but surprising none the less. 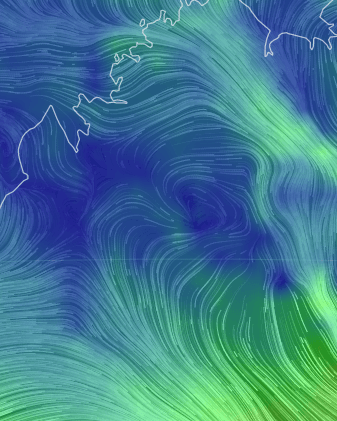 What was surprising is the 200mb showing it reached all the way up there weakish up there but surprising none the less.

It gave it a red hot crack didn't it. Shame things didn't line up better for the low to move offshore and dip it's toes in the water, we could've had a beauty on our hands. Should continue to meander around Kununnarra / Darwin / Broome over the next couple of days, dragging the monsoonal trough down until Thursday in the central WA/NT border area giving them a few more heavy showers at least.

Yeah 18z was a building ridge under it nudging the vorticity back N. Would be mostly mid-level i guess @ that time but if it could get over water in good conditions re shear wise no reason why it could not regenerate. 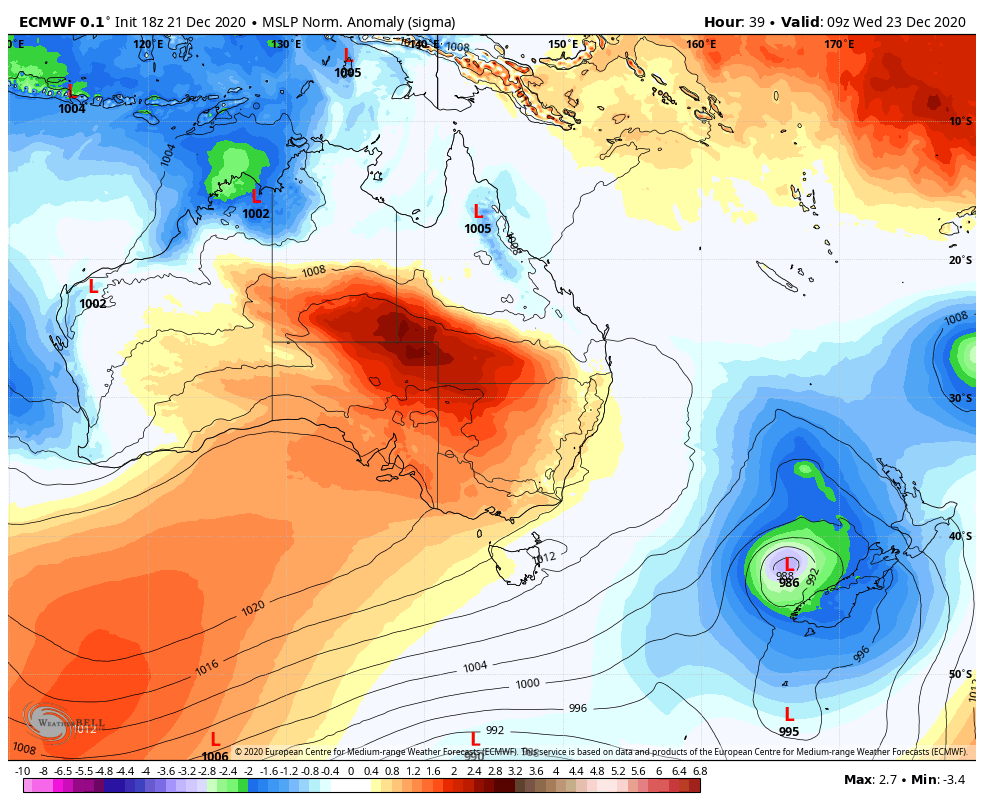 Here is an interesting comparison between the current operational GFS (pic1) and the pilot next version of GFSV16 (pic2).
With the same initialisation time and chart for the same simulation time-step.
Makes one wonder if the new version V16 is going to produce even more wild scenarios when it goes live.
And yes I know it is only one forecast, so we will need to see how V16 performs over multiple forecasts. 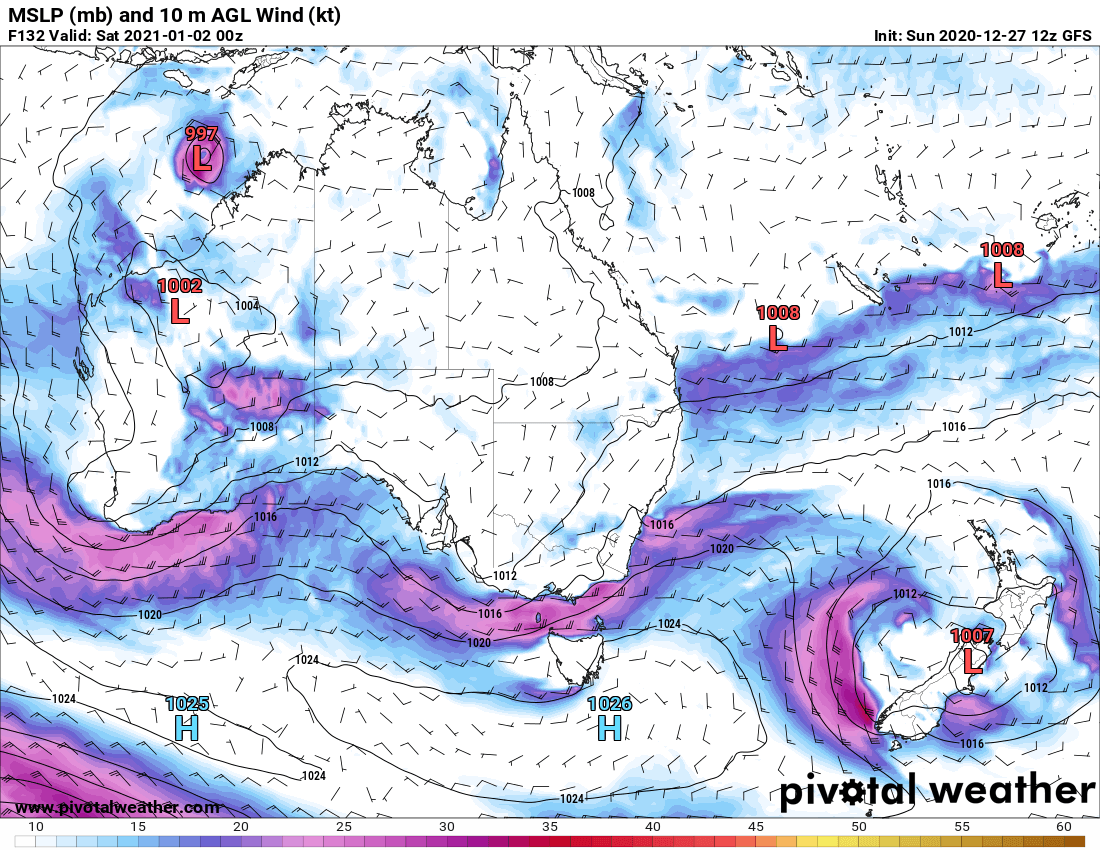 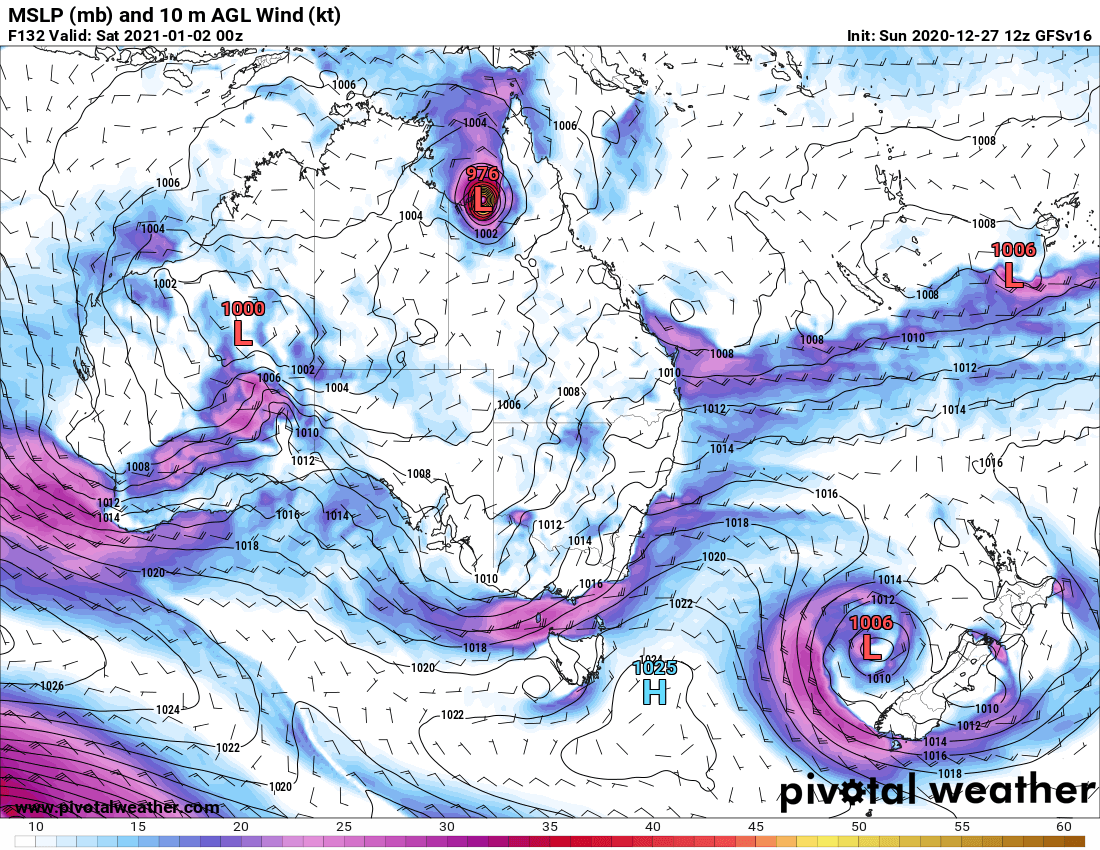 Wow - this could help move things along nicely if nothing gets in the way: 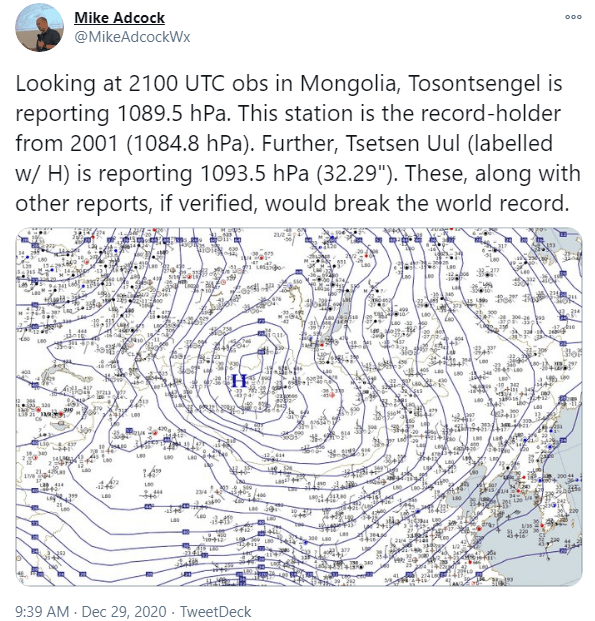 EC has something out in the distance off the NW coast. Not supported by GFS yet.
Reactions: StormyLee and Flowin

EC has something out in the distance off the NW coast. Not supported by GFS yet.
Click to expand...

Forecast MJO albeit not very strong is potentially helpful in the right area for that time.

EC has something out in the distance off the NW coast. Not supported by GFS yet.
Click to expand...

All I see is that bastard bunching of the isobars on the SW corner again.

Wind & more wind. Barely dropped below 25 knots for weeks in some areas. 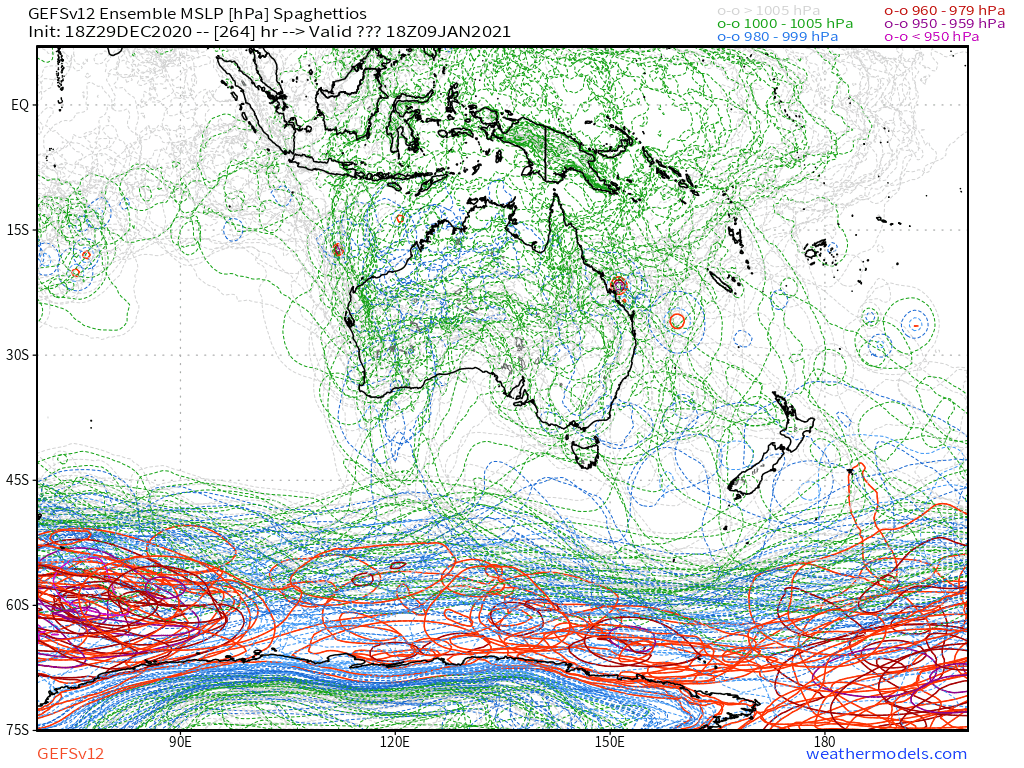 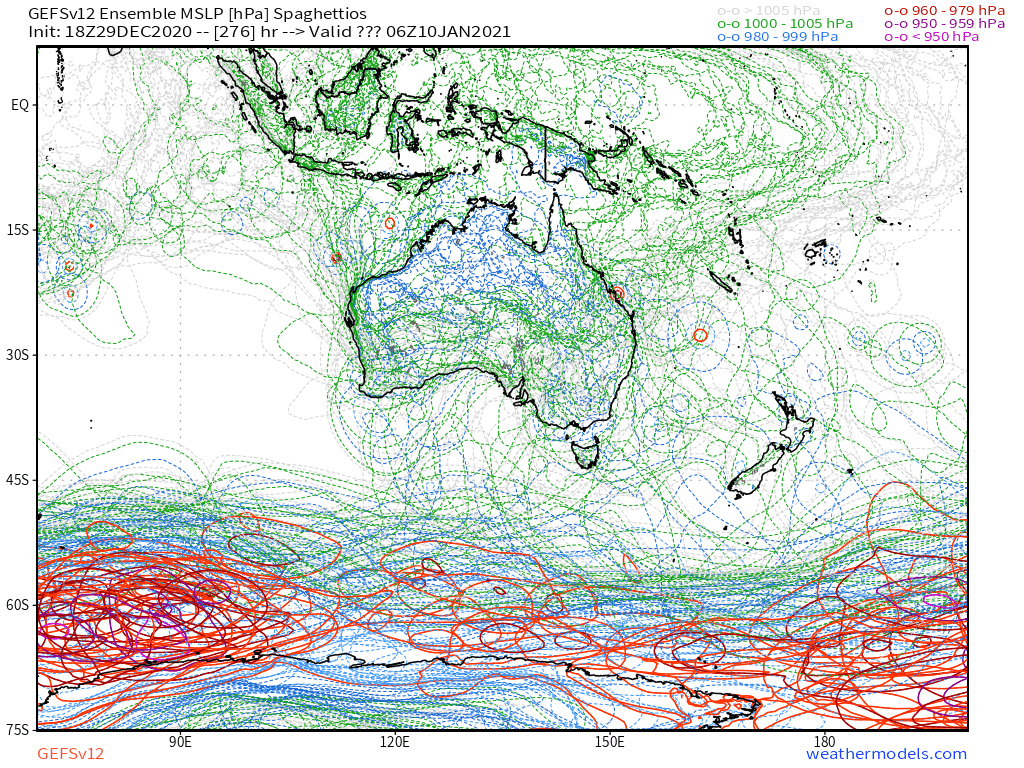 There is definitely a swing towards the possibility of TC development in the coming weeks. The latest Queensland State forecast indicates the following from the 3 January: " North to northwesterly flow will increase over the tropical northwest as a monsoon trough is re-established over the NT". TC development increases with the onset of a monsoon trough. The latest Access-G charts indicate that this monsoon trough might be dragged towards SEQ towards the end of its run https://www.weatherzone.com.au/models/?lt=wzcountry&lc=aus&mt=accessg&mc=mslp&mso=0&mh=192&focus=mh. It's early days, but there is a shift.
Reactions: SkittlesonWallis, StormyLee and Claude Cat

Well it's certainly possible given the strength of the Siberian High. 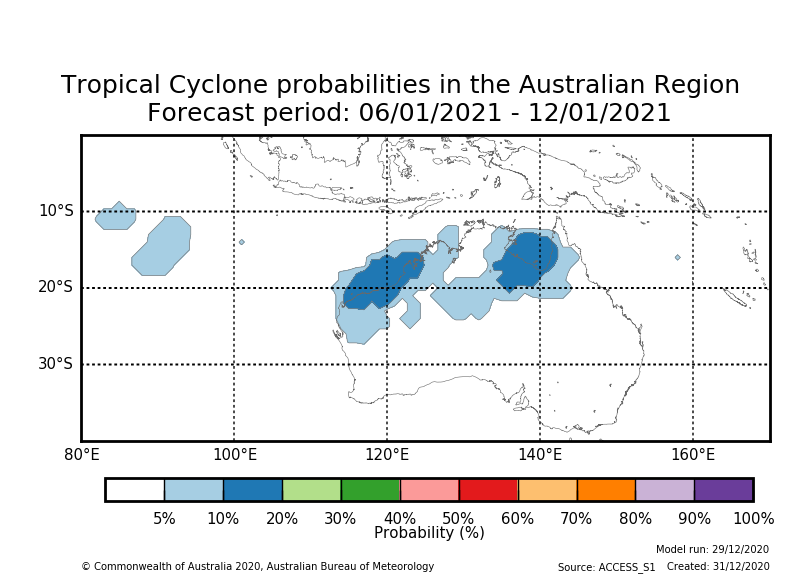 ACCESS and EC hinting at a GoC cyclone next week. (and a nasty ECL as well!)
Reactions: Flowin

Headline:
A tropical low over the western Gulf of Carpentaria is expected to move east-southeast and intensify during Sunday.

Movement: southeast at 7 kilometres per hour.

The tropical low may develop into a tropical cyclone during Sunday night over the far southern Gulf of Carpentaria.

The tropical low or cyclone is expected to move southeastwards and cross the southeastern Gulf coast during Monday.


Hazards:
GALES extending to 100 kilometres from the centre of the tropical low are expected to develop about coastal and island communities between NT/Qld Border and Kowanyama during Sunday night.

ABNORMALLY HIGH TIDES and large waves are expected about the southeastern Gulf and western Cape York Peninsula as the system approaches the coast.

HEAVY RAINFALL that may lead to flash flooding about the southeastern Gulf of Carpentaria, southern Cape York Peninsula and adjacent inland areas. 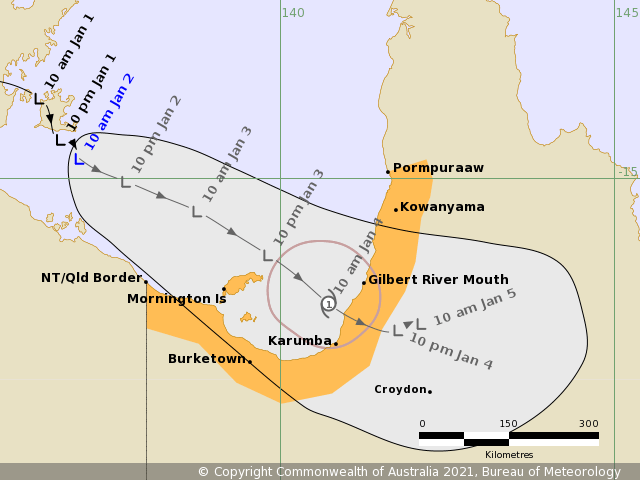 Mornington Island is really getting it's moist on now.

Gusts of 105km/h observed @ Normanton, interestingly on the SW flank.

Just realised there's no AWS on the Northern sector of this storm, so likely the gusts were quite a bit stronger on the NE'ly quadrant.
Reactions: Flowin

Little damp up there tonight @Seafm?
Click to expand...

It was early in the evening but pretty well nothing since. All moved south to the Ingham/Townsville area.
Reactions: Flowin, BrettSS and Jacko4650

Seafm said:
It was early in the evening but pretty well nothing since. All moved south to the Ingham/Townsville area.
Click to expand...

South of you, but the Herbert River gauges are very lively. Getting towards major flood levels downstream.