The 10 year redevelopment plan for the Snowy Mountains called for the erection of hotels, ski-schools, infrastructure and transport to open up the magnificent alpine region.
Send via Email
Current Time 3:09
/
Duration 3:09

This article was originally published in The Sydney Morning Herald on September 10, 1948

A 10-year plan to develop the Kosciusko alpine region into Australia's finest holiday and winter sports resort has been recommended to the State Government by Mr H. J. Lambie, who retired last month from the post of director of the New South Wales Government Tourist Bureau. The plan envisages a chain of alpine villages along existing highways, providing accommodation for 10,000 visitors a day, instead of 400 as at present. Cost of the completed scheme would be about £2,500,000. 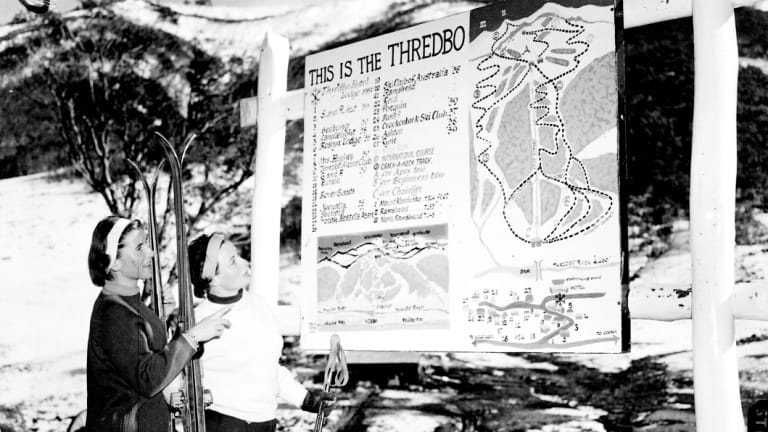 Skiers at Crackenback, Thredbo, NSW, in August 1958. It was said Australia possessed in its alpine country one of the most beautiful holiday resorts in the world.

Photo: Gordon Short
Mr Lambie has retired on superannuation after seven years as manager of the Hotel Kosciusko and 24 years as director of the Tourist Bureau. He has been a member of the Kosciusko State Park Trust since its establishment in 1944. Plans submitted by him to the Ministry of Immigration and Tourist Activities show a chain of hotels, chalets, family lodges and staff cottages fronting existing highways at Kosciusko, Adaminaby, Kiandra and Yarrangobilly Caves. They offer two classes of accommodation: Luxury service for oversea tourists at from £2/2/ to £5/5/ a day; moderate service for young people and parents with families at about 15/ a day, or less with some self-service.

Mr Lambie said yesterday that a lifetime's study of the tourist business in Australia and in overseas countries had convinced him that Australia possessed in its alpine country one of the most beautiful holiday resorts in the world.

Very few Australians are aware of the priceless tourist asset they have in their midst, because it has been developed piecemeal.

Mr Lambie
"In summer it is a fisherman's paradise, a lure for oversea anglers and a perpetual fascination for the motorist, hackney rider and hiker. In winter it offers scope for snow sport comparable with the finest skiing terrain of Europe and America. Yet not more than 6000 Australians visit it in any one year.

"The Government of New South Wales has invested £500,000 in buildings, plant and roads in this mountain region but as yet it is not a direct profit-earning venture. Accommodation is so limited and the roads are so blocked by snow that thousands of prospective visitors have to be turned away every winter. 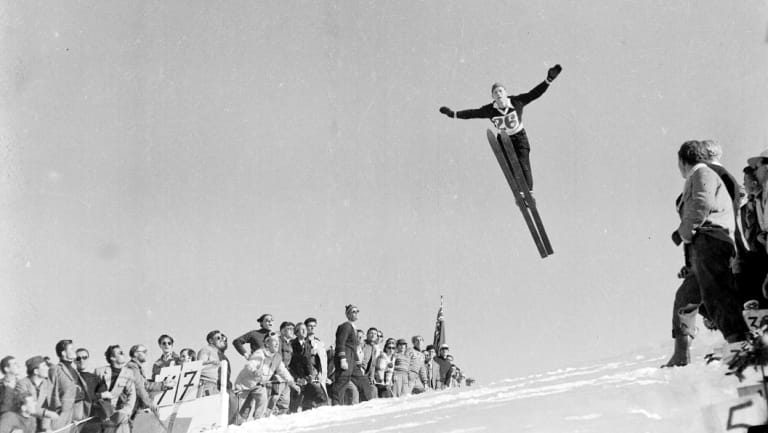 Skiing skills in 1953 win admiration at Mount Kosciuszko, part of an area that offered 'scope for snow sport comparable with the finest skiing terrain of Europe and America'.

Photo: Gordon Smart
"Such an unsatisfactory position can be remedied only by a progressive policy of expansion and improvement on commercially profitable lines as proved successfully in the United States, Canada, Switzerland, and Austria, where modern snow-removing machinery guarantees access to the heart of the snowfields over main mountain roads.

"Private enterprise cannot take a large part in this developmental task because of national policy and the conservation obligations of the Kosciusko State Park Trust. The Government must do what other countries have had done by commercial initiative, sustained by Government subventions in times of business depression." 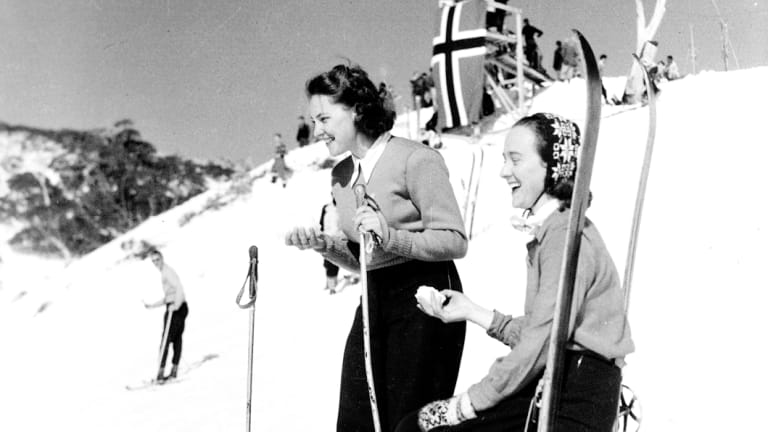 A skiing party make the most of a chance to enjoy Mount Kosciuszko, NSW, in August 1953.

1. Construction of a palatial hotel to meet the oversea tourist traffic with accommodation ultimately for 500 guests, each bedroom having its own bathroom. Provision for well-equipped ski rooms, solariums, ballroom, cinema, hot swimming pool, ice-skating rink, physiotherapy and beauty parlours, commodious garaging and car-parking facilities, with heating, lighting and power derived from hydro-electric installations in the vicinity.

2. Construction of half a dozen ski-school chalets, each with four-to-six-bed dormitory accommodation for 100 guests at a moderate tariff.

3. Erection of colonies of small cabins for weekly rental to parents taking holidays with their children. Meals at adjacent cafeteria, equipped with full postal and telephone services and snow transport vehicles for hire.

4. A central cafeteria at Smiggin Holes (three miles above the Hotel Kosciusko) capable of seating 250, and servicing up to 1000 guests a day. It would supply meals for guests staying at neighbouring ski-school chalets and cabins, as well as day visitors from the Hotel Kosciusko and tourist-bus travellers from beyond.

5. A cafeteria at the Hotel Kosciusko to meet the needs of day and weekend visitors, who numbered up to 500 each weekend this winter.

6. Additions to the Chalet at Charlotte Pass, provisional on the existing building being spared in any future scheme for the construction of a high-altitude dam in connection with the Snowy River irrigation and hydro-electric scheme.

8. Installation of ski lifts at all popular centres.

9. Expansion of the existing fleet of snowmobiles to carry visitors to ski runs and panoramic lookouts on the Main Range and spurs, such as the Perisher Range.

10. Speed-up of rail and bus transport to the snowfields, particularly by the introduction of Diesel trains running between Sydney and Canberra, and Canberra and Cooma, thus bringing NSW mountain resorts within reach of interstate, oversea, and back-country holiday-makers reaching Canberra by air. 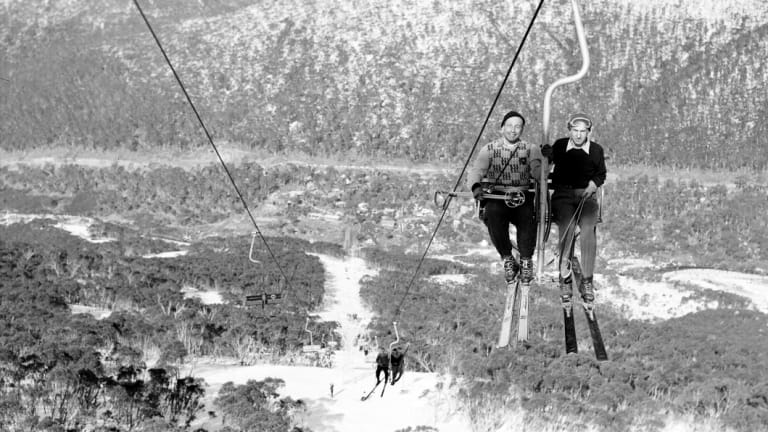 The view down the mountain at Crackenback, Thredbo, in August 1958. A plea to install ski lifts at all popular centres was included in a plan by a former tourist boss.

Photo: Gordon Smart
Mr Lambie said the practical course was to spread the building programme over 10 years, beginning with the creation of a complete alpine village at Smiggin Holes, where the Kosciusko State Park Trust had already begun the construction of a 70-bed snow lodge of local granite. This should be followed by the erection of hotels, ski-school chalets, and family cabins in the vicinity of Back Perisher Mountain and Sunset Valley, opening up a magnificent stretch of skiing country in proximity to the Hotel Summit road.

"The problem is twofold," he said. "First, there is the pressing need to provide cheaper accommodation for young people and parents with families who are unable to afford the higher hotel tariffs. Secondly, there is an increasing demand from overseas visitors, and many Australians for that matter, for modern high-class accommodation equal to the world's best. 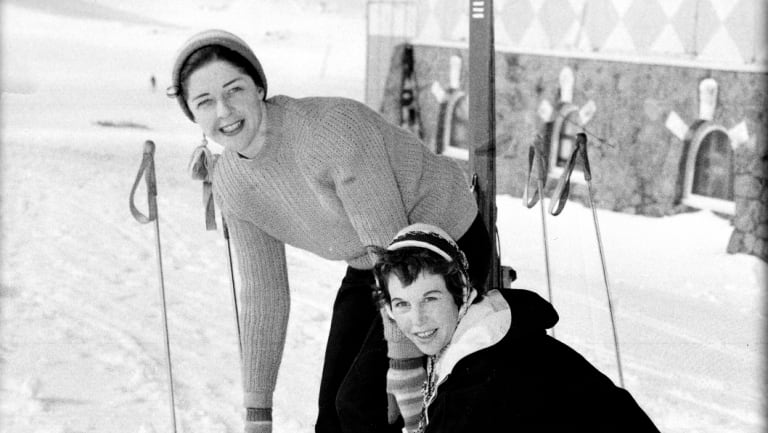 Skiers at the chalet at Mount Kosciuszko, NSW, in July 1958. Mr Lambie said the area could become 'a splendid magnet for the overseas tourist whose summer is our winter'.

Photo: Harry Freeman
"Both kinds of accommodation must be provided if the Tourist Department is to give an efficient service to the public and build tourist traffic to profitable levels. We have a duty to give our people the means to enjoy happy and healthy holidays. In my opinion this can be started now without detriment to the home building programme. If adopted, my scheme would be of inestimable service to the Australian people, a great advertisement to the State of New South Wales, and a splendid magnet for the overseas tourist whose summer is our winter.

"Indeed, the provision of amenities for the enjoyment of highly attractive winter holidays is urgent for national economic reasons so as to encourage a more balanced distribution of the pressure of demand for holiday accommodation. The established tendency to concentrate vacations from Christmas to Easter can be eased to the extent that our winter sports areas are opened up to the general public from Easter to Christmas. Let us not tolerate for another winter the shameful blockage of the Monaro Highway between Tumut and Cooma by easily removable snowdrifts, or the similar condition of the Kosciusko Summit road beyond the Hotel Kosciusko."

* The spelling "Mount Kosciuszko" was officially adopted in 1997 by the Geographical Names Board of NSW.

This article was originally published in The Sydney Morning Herald on September 10, 1948

I doff my hat to Mr Lambie and his team for having the vision
Reactions: sastrugi, Mark*V and skiflat

Someone should tell that guy in the background it's really rude to chat on the phone while your mate's carrying the bulk of the load
You must log in or register to reply here.
Remove ads with a
Ski Pass

The Economic Significance of the Australian Alpine Resorts Project