You are using an out of date browser. It may not display this or other websites correctly.
You should upgrade or use an alternative browser.
L

A friend and I decided to head up to Bogong for the weekend together. Walking up Eskdale on Saturday morning we hit the snow surprisingly early, and after about an hour and a half of walking, reached the hut, with blue skies above.

With a week’s worth of baking in the sun and freezing on the north side of the mountain it was appearing to be spring snow galore, and our warm up (which ended up somehow being the steepest of the weekend), was dropping in off the East side of Eskdale after had climbed above the tree line. It was much fun. 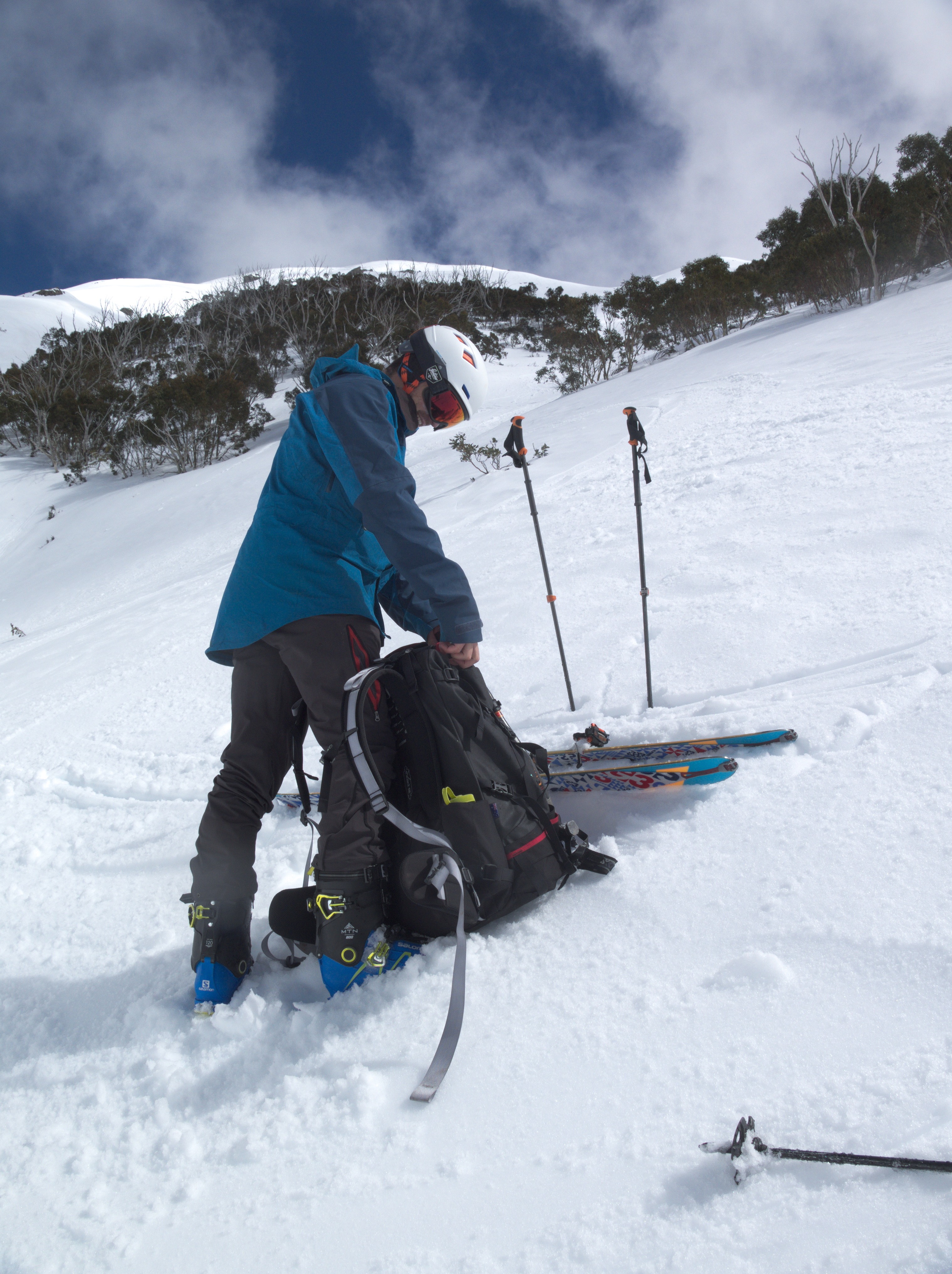 With the snow looking to be stable, we opted to skin up the gully towards Hell’s Gap (instead of bootpacking back up to the ridge). It’s a little steep/tight in spots for comfortable skinning, but it was managed in the end. Also had fun avoiding the slow inevitable slide into the creek. 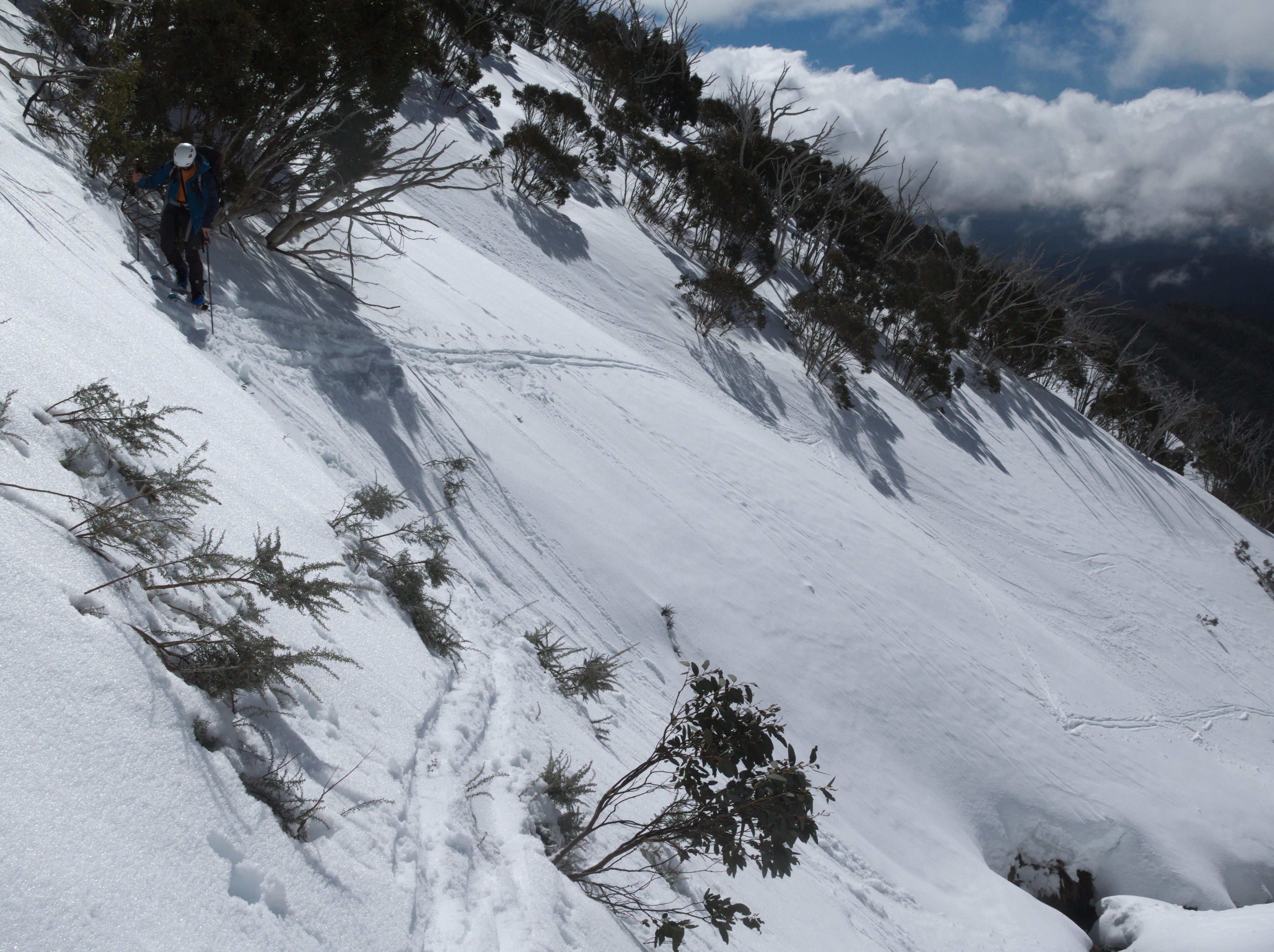 We sat and ate lunch, and the cloud began to close in. I had been hoping we could take a look at the gully to the West of Staircase (Devil’s Door?), but descending from the summit with 5m visibility, something along the lines of “this is bad isn’t it?” “yes it is bad!”, we turned around before it got steep and made a beeline down the south face instead. 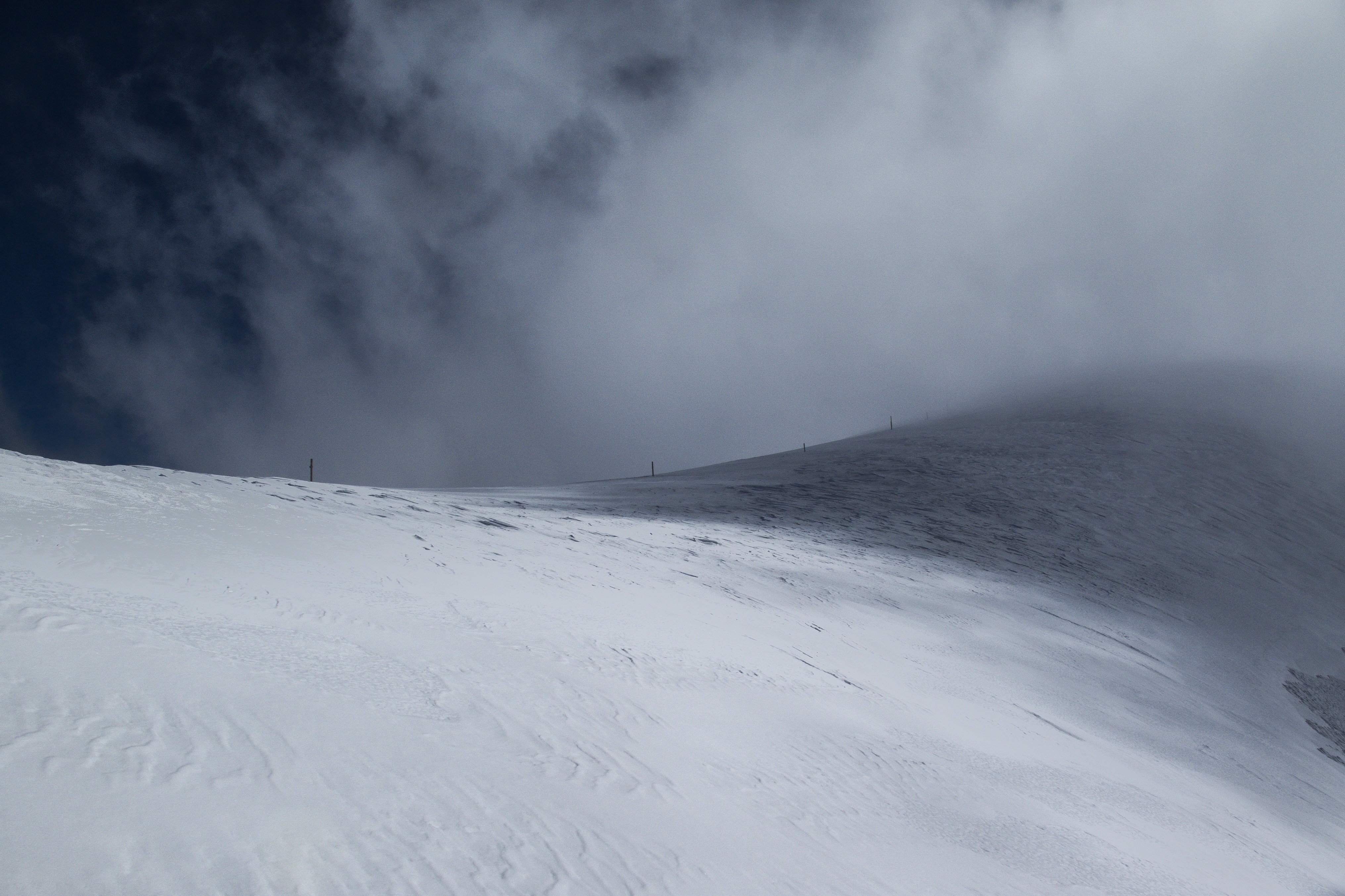 With clouds drifting in and out, we spent the afternoon on a surprising amount of secretly stashed fluffy stuff. 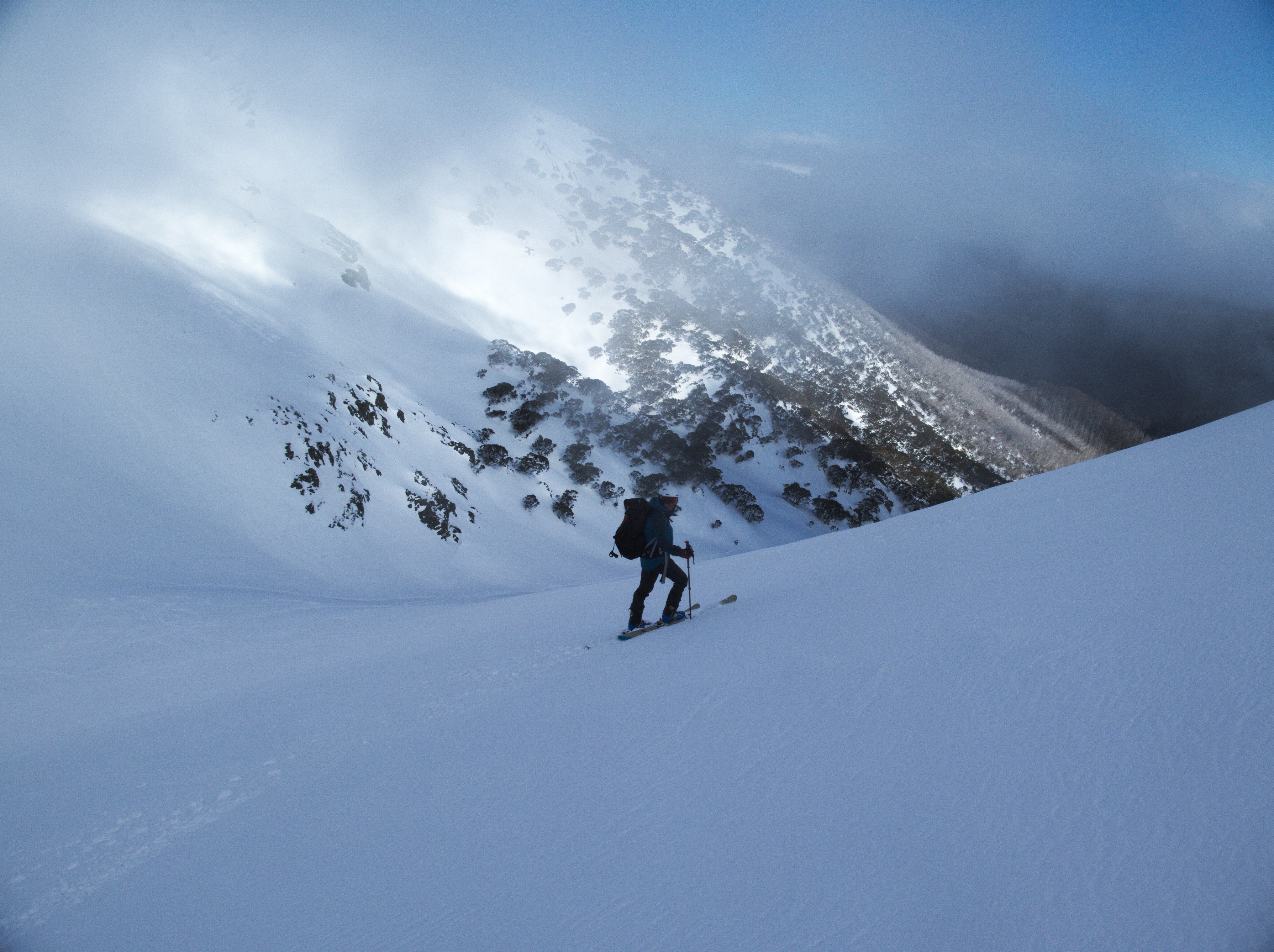 That night the hut was full of happy folk, and the snow flakes began to fall, with what appeared to be 10cm by morning. I felt a little sorry (and slightly amused) for our friends who had decided to explore the concept of bivy bags on (and now under) the snow. 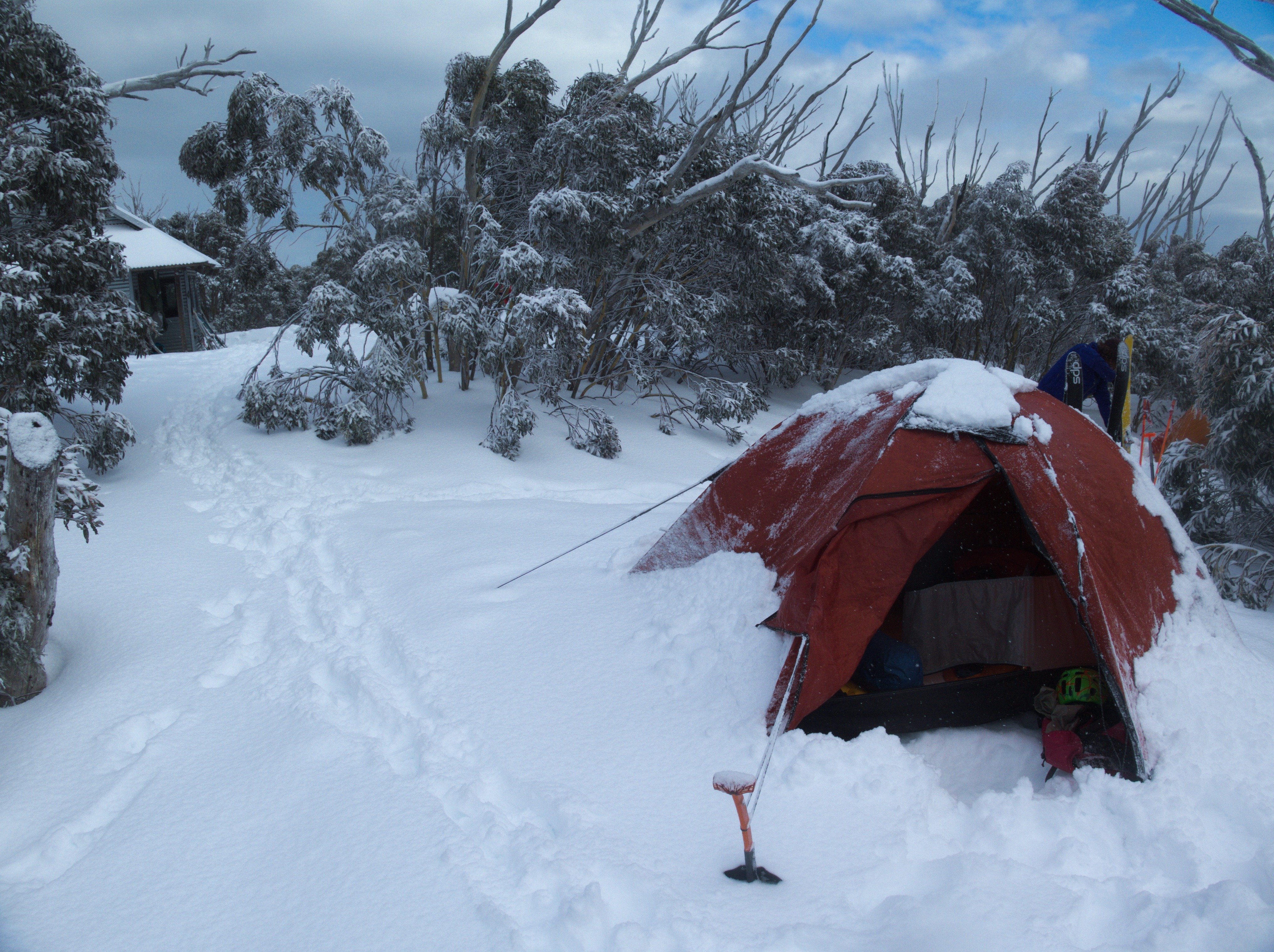 In the morning I had a discussion with someone else who was at the hut. I asked them whether they had ended up skiing the bowl we had been in the day before, down from Hell's Gap. They replied that they hadn't, but that it would be dangerous today because of the snow that had been forecast to fall from the NW, which would collect snow in the bowl. The bowl ranges from SE around to NW. So she certainly had a point. I wasn't so sure about the wind direction given our current location's lack of consistent tell-tale signs of wind direction, and stated that "it will be interesting to see what the wind has been doing up the top", and the conversation ended there. It was a good conversation to have, as it doubled my attention to what was going on with the snow that day.

As we skinned up Eskdale spur, I pointed out to my ski partner my preference to ski the open, face-like, North ridge we could see coming down between the Staircase and Eskdale from the top of Eskdale. My thoughts were that if the snow had come from the NW, this ridge would be a safer objective than the other side of the mountain, and the popular SE facing gullies we had skied the day before, which we were also contemplating today. Another thought for this preference was that the wind now appeared to be coming from the South, and so the chance the South side being cloudy, and windy and unpleasant was stronger. But I did also consider in my mind that with the wind now coming from the South, wind transported snow on the North side would need to be carefully monitored as the day progressed. I would like to work on being able to air these thoughts more often with those I'm skiing with, and extracting their opinions (and reasons) also as it seems that more communication on these things is always better, and it enables mistakes to be found before decisions are made. 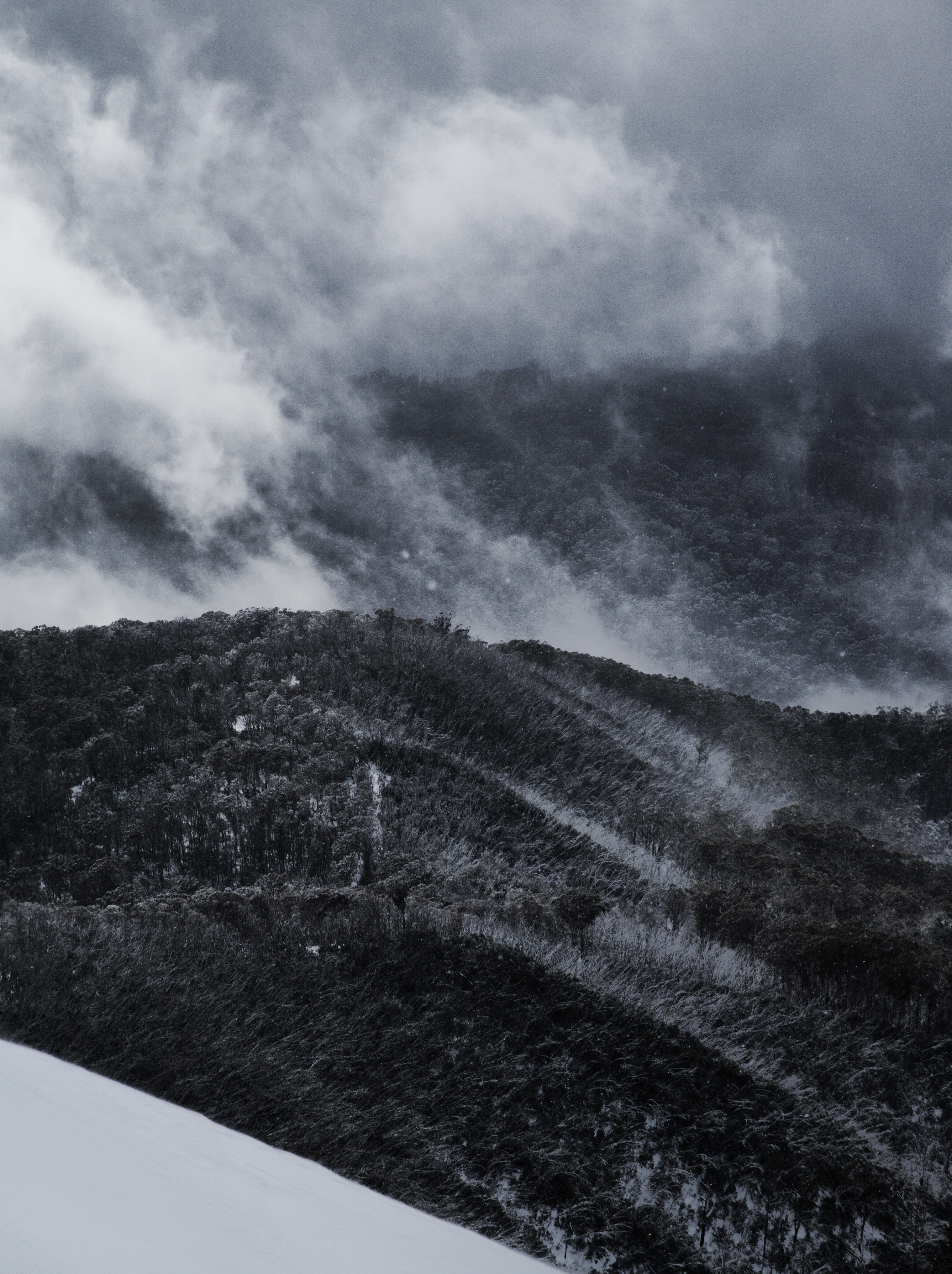 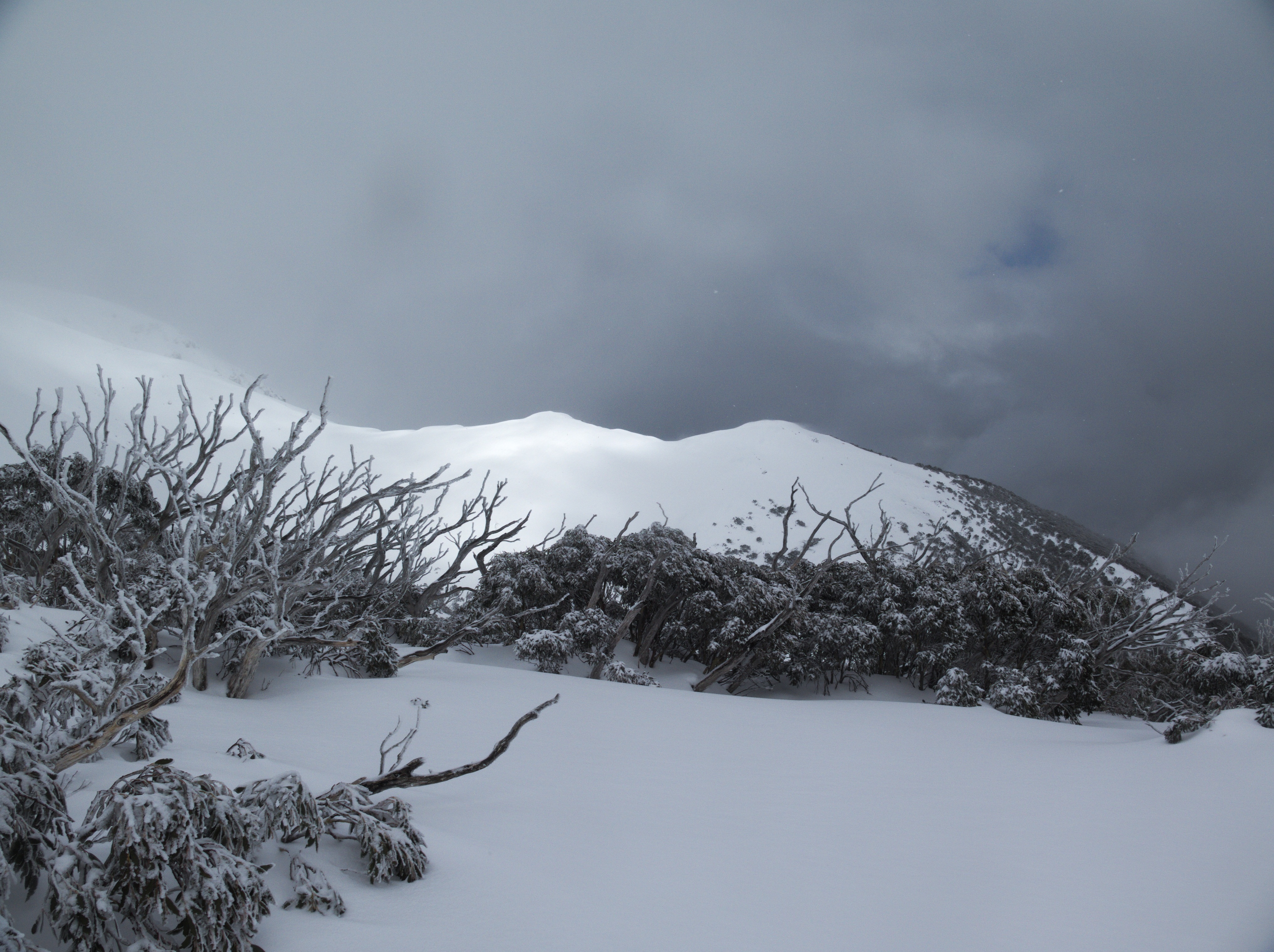 Without reaching agreement, we decided to delay the decision until reaching the top of Eskdale. As we approached the top, I stopped stopped a few times on kick turns, to poke a hole to check how much snow had accumulated on top of the melt/freeze base. At the maximum slope angle, the drifts were fewer, and on average about 10cm of fresh snow between where the icy crust was exposed. There were some small drifts of 20-30cm near the top, growing larger by the minute from the wind.

It was getting windy on top, so a consensus quickly was reached to drop down the North face from the top. In my memory, the main point was to avoid the rock outcrops, and stick to the West side of the face where there was a clear path, with the shallowest angle of descent. Stopping several times on the way down, the snow conditions were identical to what we had encountered on the way up the Eskdale ridge proper (to be expected I guess, more or less the same aspect). In my head I was mindful that if we stayed down too long, it may not be safe to return the way we came if too much snow had been transported. I was also a little concerned we would hit a dangerous patch of ice, but visibility was good, and it was easy to stick to the small snow drifts and avoid the ice. 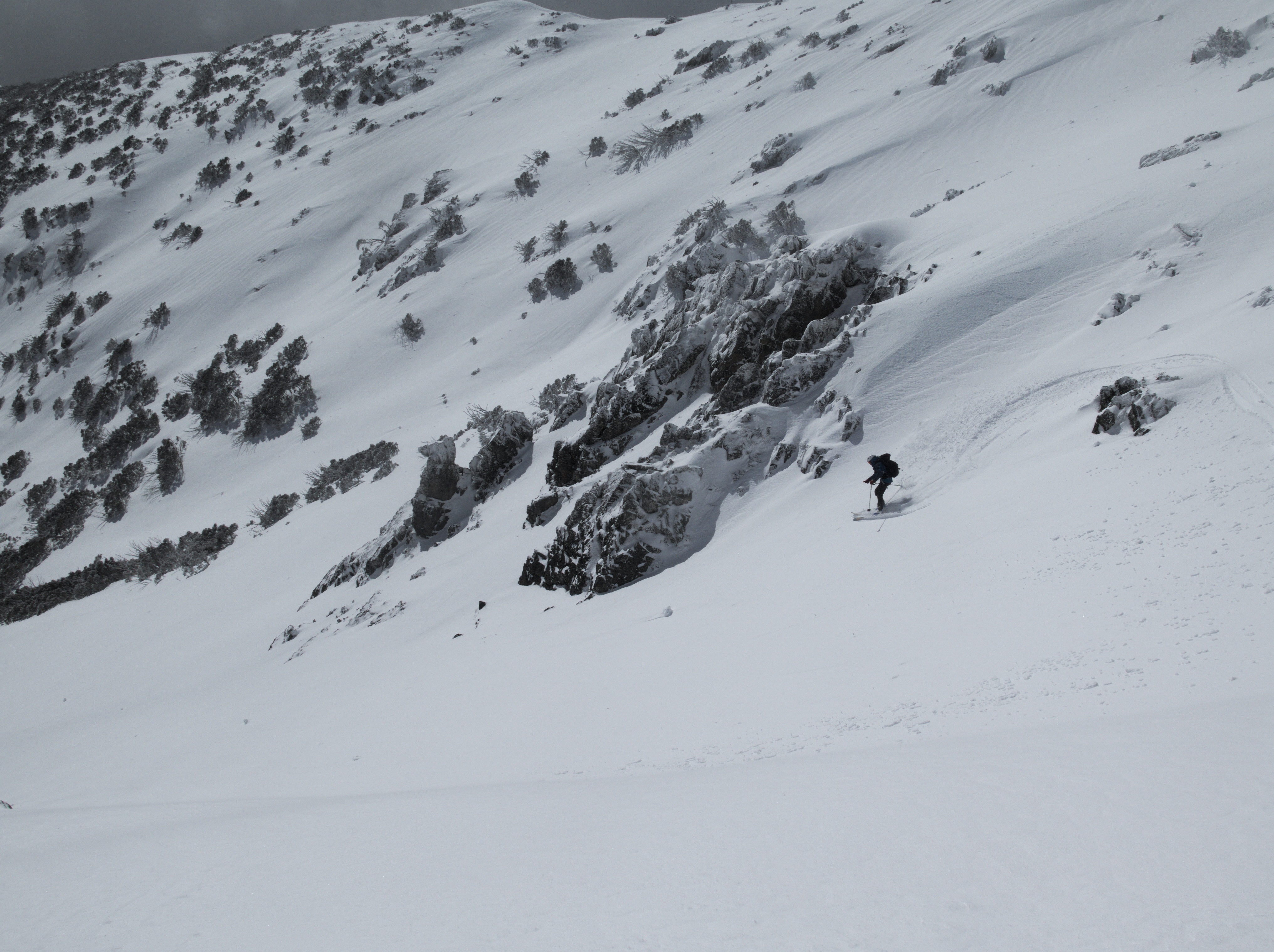 We made it all the way down to between the trees, and had an absolute blast. Upon climbing back up it was interesting to notice (and we talked out loud about this) the naturally pinwheeling chunks of snow from some of the outcrops, and from our tracks. This was from what I’ve learned, a potential tell-tale sign of a loose/wet slide risk, but the lack of moisture evident in the snow calmed the concern somewhat. Traversing back to the face we had descended, avoiding the NW facing bowl (with the pinwheeling chunks), we made our way back up to the summit. I snapped a shot of some riders on the East side of the Staircase, tracks looking glorious. Again, stopping to check at each zig/zag, the snow transport conditions did not appear to have changed much. 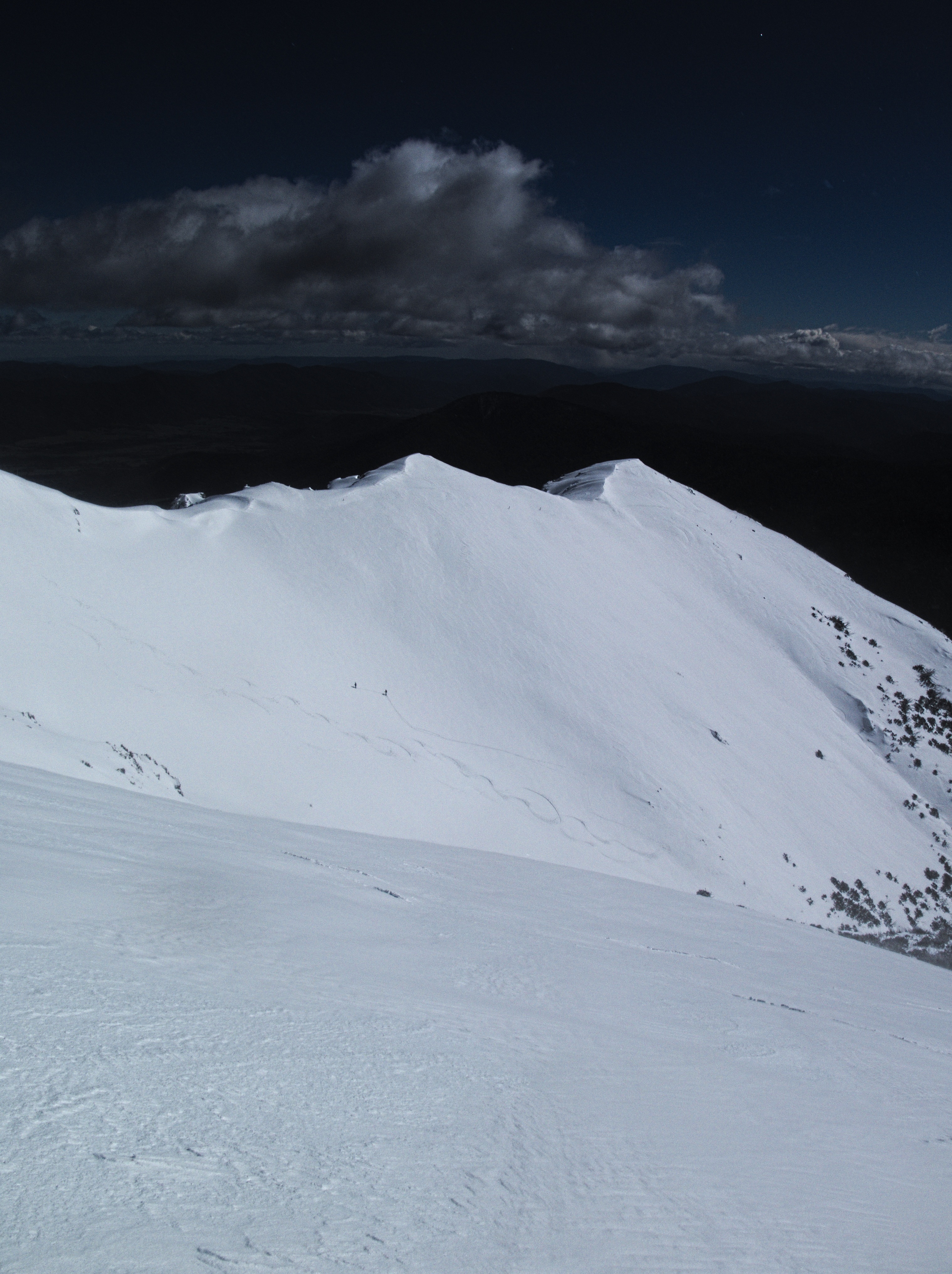 Back on top of Eskdale, the wind was really howling, so we made a beeline down to the Staircase to check out what the conditions were like on the Staircase, particularly the gully on its West side again. It would be fair to say that the snow at the top of the gully was very similar to the face we had previously skied, perhaps somewhat more scant, ice further down was a potential concern. Standing at the top, the northerly entry face to the gully; "There doesn't look to be enough new snow here to slide or dig a pit?" I said poking madly with my pole in the 5-10cm of powder on top of ice in the drift at my feet. "The snow looks better over on the other side" my partner said with his head turned the other direction. "I'll just do a ski cut to see how things are here, over to there on the ridge?" I said. He reluctantly agreed (or held his tongue) and I rocketed off across the slope, clattering over a couple of small icy patches, quickly realised that the wind transported snow was not in any way a concern in this location. A rough patch of ice upon reaching/stopping the ridge had me off my skis (which really need to be set at a higher DIN...), sprawled on a knoll, how embarrassing, probably the silliest thing I did all weekend. Too much gusto on the slightly unnecessary ski cut?

Putting skis back on, a snowboarder on snowshoes walks up to us from below, followed by their partner on skis. My ski buddy's beliefs on the better snow are confirmed by an enthusiastic recommendation to follow in their tracks on the East side of the Staircase.

By this stage, I was content to go with that option and watched my ski partner drop in over the edge of the small cornice, and followed him down after he had stopped in a suitable location. I slightly regret having not dug a snow pit here before dropping, or discussed its merits more fully, as there would have definitely been enough fresh snow at the top to have done so, and quite possibly we may have gotten some results which would have rendered entering the face at a more shallow location a sensible (and somewhat less exciting) idea, or perhaps it would have been fine, I guess we’ll never know. We were keen to get the last run in for the day, and apart from the small amount of loading visible near the top, with no obvious signs of instability from the previous skiers or our own observations, the level of risk appeared acceptable. It is interesting attempting to reconcile this choice retrospectively with the knowledge that a slope on a similar aspect and elevation was to slide just an hour or so later that day. The snow was harder packed, and not quite as enjoyable as our previous run but still great fun. Zooming down into the gully, in the back of my head was the thought that perhaps the snow was was different enough to warrant stopping to check it out further. 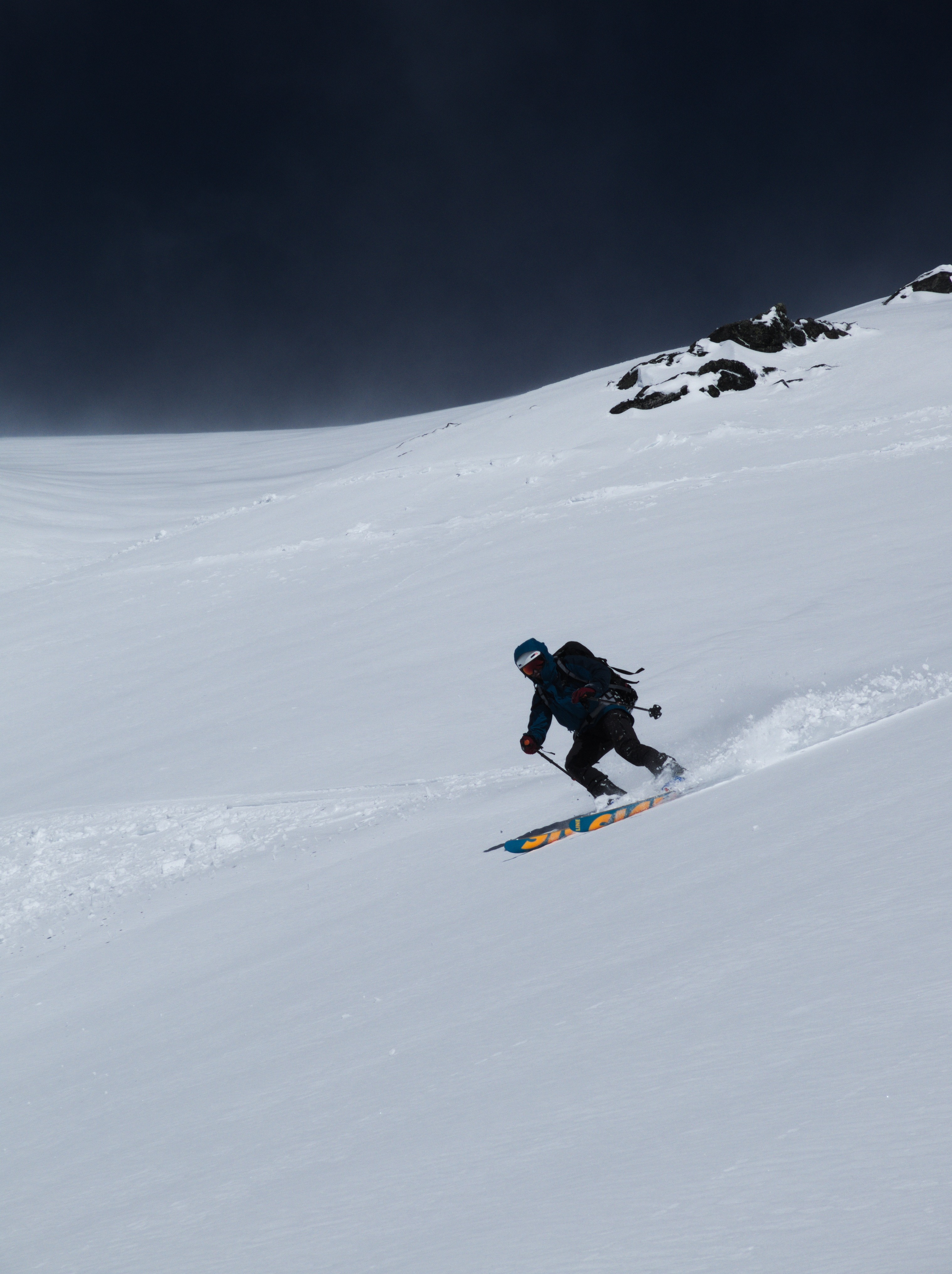 Anyhow, with the time for thought during the climb up, we aimed instead for the shallow entry option further down the ridge, remembering the adage that it's better to take the safest possible route on the way up. Received several helpful tips on skinning technique from buddy too.

Upon reaching the Staircase, finally got some use out of the ski crampons lugged with me on several trips, we reached the point where the ski poles departed the ridge and traversed the face. The wind was howling at this point, and watching the climbers wade through the snow ahead, it was obvious that wind transport was taking its effect, so I opted conservatively to continue up the ridge a little further above the pole line to where the slope was less inclined to begin our traverse through the soft stuff.

The wind was like sandpaper to face and hard to stand straight, but excellent type 1.5 fun, we finally got down to Michell hut, where it was sunny, and barely a breath of wind. 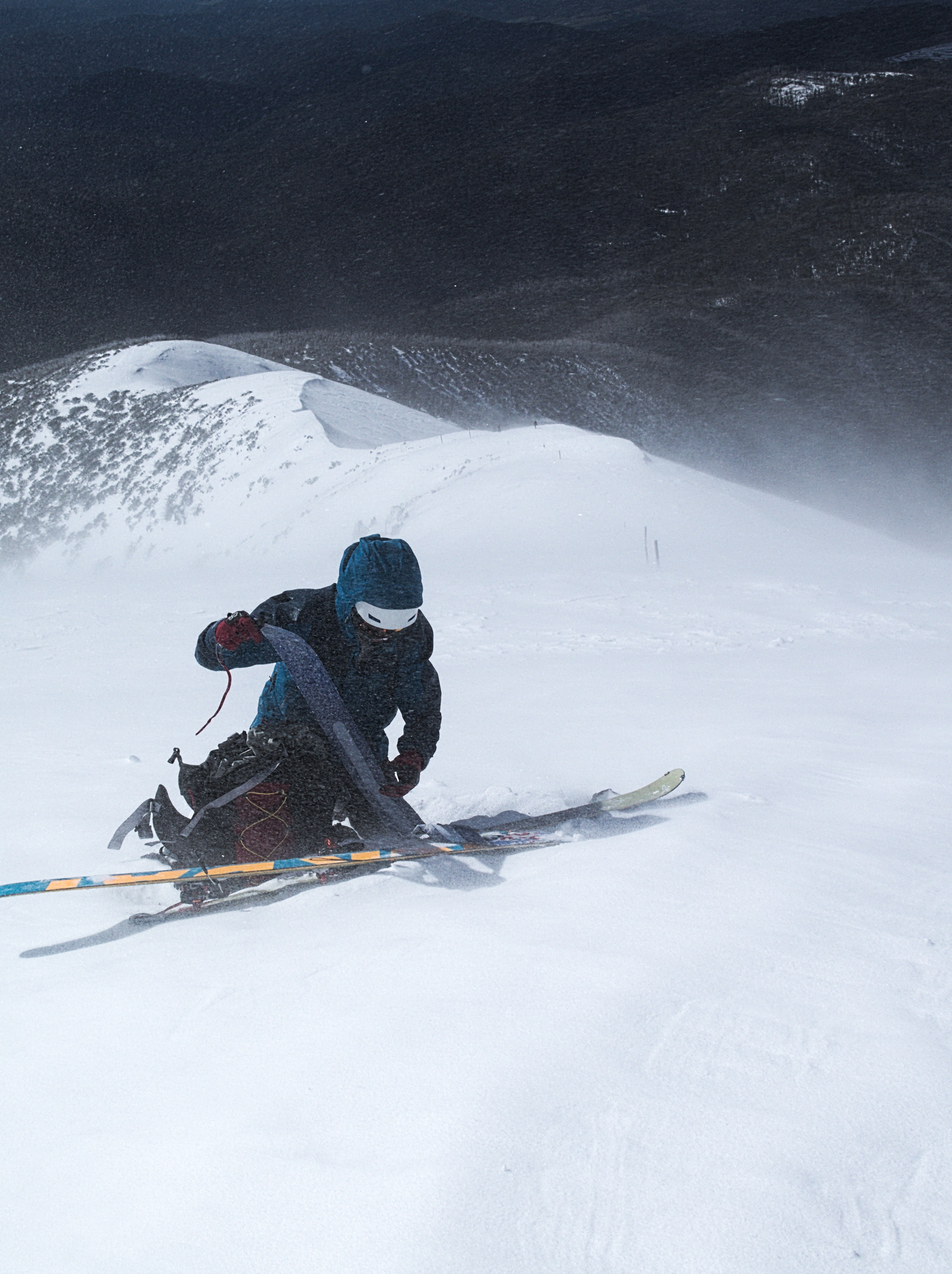 Getting home, it was interesting to see reports of a slide on the NE side near the top of Eskdale, and realise that concerns were warranted, but also that perhaps more could have been done for safety's sake. Changing wind direction makes for confusing conditions, and some assumptions don't hold for long! I’m also now not such a big fan of how safe travel techniques (leaving a decent separation distance between us on avalanche terrain), renders natural conversation with your partners about snow conditions (and route selection) as you notice them a more difficult affair. It’s certainly been worthwhile chatting and debriefing with each other, so much to learn from such experiences! 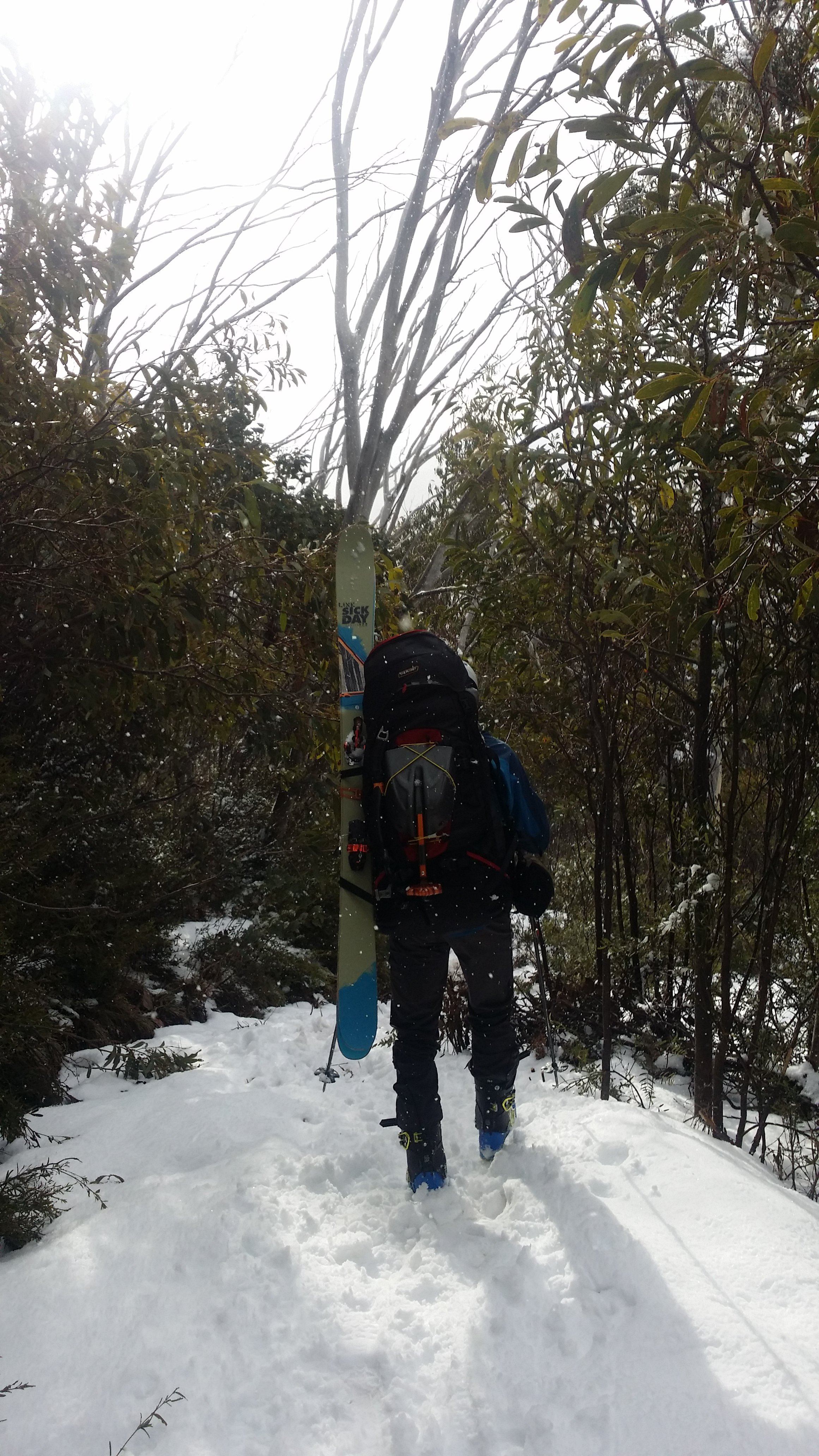 Thinking about doing a write up about an avalanche course and some backcountry trips did in New Zealand this winter too at some stage if I get the time.
Last edited: Aug 29, 2017
Reactions: Ricardo64, Chaeron, Snowy Joey and 7 others
A

A
Reactions: Chaeron and luke1234
You must log in or register to reply here.
Remove ads with a
Ski Pass