SAN FRANCISCO, CA—Scientists recently recorded the lowest temperatures on Earth at a desolate and remote ice plateau in East Antarctica, trumping a record set in 1983 and uncovering a new puzzle about the ice-covered continent.

Sastrugi stick out from the snow surface in this photo near Plateau Station in East Antarctica. Most of Antarctica looks quite flat, despite the subtle domes, hills, and hollows. 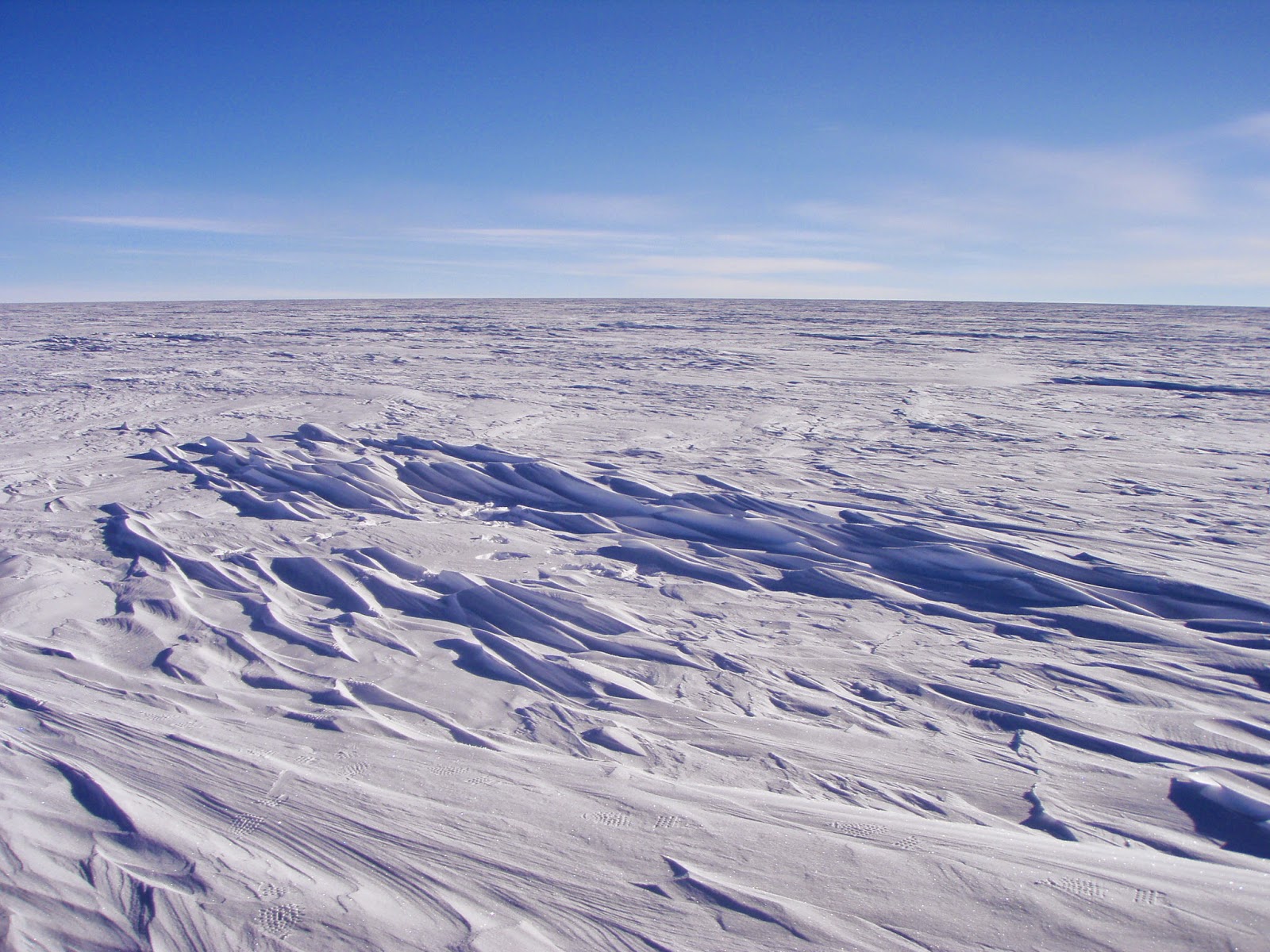 Ted Scambos, lead scientist at the National Snow and Ice Data Center (NSIDC), and his team found temperatures from −92 to −94 degrees Celsius (−134 to −137 degrees Fahrenheit) in a 1,000-kilometer long swath on the highest section of the East Antarctic ice divide.

The measurements were made between 2003 and 2013 by the Moderate Resolution Imaging Spectroradiometer (MODIS) sensor on board NASA’s Aqua satellite and during the 2013 Southern Hemisphere winter by Landsat 8, a new satellite launched early this year by NASA and the U.S. Geological Survey.

“I’ve never been in conditions that cold and I hope I never am,” Scambos said. “I am told that every breath is painful and you have to be extremely careful not to freeze part of your throat or lungs when inhaling.”

Scambos said the record temperatures were found in several 5 by 10 kilometer (3 by 6 mile) pockets where the topography forms small hollows of a few meters deep (2 to 4 meters, or 6 to 13 feet). These hollows are present just off the ice ridge that runs between Dome Argus and Dome Fuji—the ice dome summits of the East Antarctic Ice Sheet. Antarctic bases sit on each of the sites and are generally not occupied during Antarctic winters.

Under clear winter skies in these areas, cold air forms near the snow surface. Because the cold air is denser than the air above it, it begins to move downhill. The air collects in the nearby hollows and chills still further, if conditions are favorable.

“The record-breaking conditions seem to happen when a wind pattern or an atmospheric pressure gradient tries to move the air back uphill, pushing against the air that was sliding down,” Scambos said. “This allows the air in the low hollows to remain there longer and cool even further under the clear, extremely dry sky conditions,” Scambos said. “When the cold air lingers in these pockets it reaches ultra-low temperatures.”

“Any gardener knows that clear skies and dry air in spring or winter lead to the coldest temperatures at night,” Scambos said. “The thing is, here in the United States and most of Canada, we don’t get a night that lasts three or four or six months long for things to really chill down under extended clear sky conditions.”

Scambos and his team spotted the record low temperatures while working on a related study on unusual cracks on East Antarctica’s ice surface that he suspects are several hundred years old.

“The cracks are probably thermal cracks—the temperature gets so low in winter that the upper layer of the snow actually shrinks to the point that the surface cracks in order to accommodate the cold and the reduction in volume,” Scambos said. “That led us to wonder what the temperature range was. So, we started hunting for the coldest places using data from three satellite sensors.”

More than 30 years of data from the Advanced Very High Resolution Radiometer (AVHRR) on the NOAA Polar Orbiting Environmental Satellite (POES) series gave Scambos a good perspective on what the pattern of low temperatures looked like across Antarctica.

“Landsat 8 is still a new sensor, but preliminary work shows its ability to map the cold pockets in detail,” Scambos said. “It’s showing how even small hummocks stick up through the cold air.”

Scambos suspected they would find one area that got extremely cold. Instead they found a large strip at high altitude where several spots regularly reach record low temperatures. Furthermore, dozens of these extremely cold areas reached about the same minimum temperatures of −92 to −94 degrees Celsius (−134 to −137 degrees Fahrenheit) on most years.

“This is like saying that on the coldest day of the year a whole strip of land from International Falls, Minnesota to Duluth, Minnesota to Great Falls, Montana reached the exact same temperature, and more than once,” Scambos said. “And that’s a little odd.”

This image shows the location of record low temperature measurements for Antarctica. The red dots show where the record satellite-measured surface temperatures and the earlier record low air temperature occurred. Shades of gray are a compilation of the lowest MODIS-sensor land surface temperature readings made by NASA’s Aqua satellite during 2003-2013, with darker grays representing the coldest areas. Landsat 8 thermal images acquired in July and August of 2013 provided more detail on the coldest areas (purple squares). Elevation of the Antarctic surface is shown in green lines, and a blue lines provide an outline of the Antarctic continent, its islands, and the edge of its floating ice sheet. 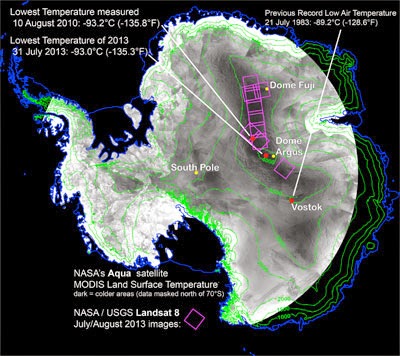 Reactions: sbm, Camelot, woggybot and 2 others

Good post, thanks for the infor.
Reactions: gareth_oau
K

Fascinating. I cannot comprehend these temps really and had no idea anywhere on earth was cold to this magnitude.

Time to update trivia brain. Vostok -89.2 deg was hard wired in there!
T

They are not drawn from a proper weather station so I doubt it'll rewrite the record books
Reactions: woggybot

You wouldn't be game to have a wee at those temperatures

Serenity said:
You wouldn't be game to have a wee at those temperatures
Click to expand...

A very long way from everybody

This is exactly what most of the higher parts of Thredbo looked like on the 18th-20th July.

Perisher was good on those dates. You just had to know where to go.

No doubt the highest recorded temperature in the world of 56.7C in Death Valley has been exceeded at a desert location somewhere in the world at some point in time that doesn't happen to have a temperature guage located there to make it official? Maybe 60C plus?

Not quite cold enough to solidify carbon dioxide. That happens at -109C. If we could get it that cold perhaps we could remove some of the excess CO2 that we've been pumping in.
M

Ben Zeenees said:
Not quite cold enough to solidify carbon dioxide. That happens at -109C. If we could get it that cold perhaps we could remove some of the excess CO2 that we've been pumping in.
Click to expand...

Ben Zeenees said:
Not quite cold enough to solidify carbon dioxide. That happens at -109C. If we could get it that cold perhaps we could remove some of the excess CO2 that we've been pumping in.
Click to expand...

bad mistake that! So why isn't the South Pole covered in frozen CO2?

Ben Zeenees said:
bad mistake that! So why isn't the South Pole covered in frozen CO2?
Click to expand...

The concentration is not high enough..... only 0.04% in the atmosphere.
Reactions: Dave6

This is really cool work, and Scambos is an absolute guru. The real significance of this work is the development of techniques to continuously and remotely monitor temperatures across the surface of the earth with much greater spatial distribution than we have currently.
Reactions: Telemark Phat

Which means ultimately there will be a new global temperature data set and a new discussion commences about global warming hiatus or cooling...terrific

No this is mutually exclusive , this is a form of remote sensing never really used historically , compaed to the lowest found with temperature station or hand measurement ..

It actually signals a bit of a paradigm shift really.
You must log in or register to reply here.
Remove ads with a
Ski Pass