Question Is This Feathertop?

Total Whiteout said:
Only problem is there’s be someone on this website who would then complain about scale or perspective or some minor inaccuracy...
Click to expand...

Tho ideally folks who do get upset about such issues should go off and look at other threads.

It’s easy to pick shit and complain, anyone can do it.

But it’s heaps much nicer to say if you like something and be constructive.
Reactions: Chaeron and Total Whiteout 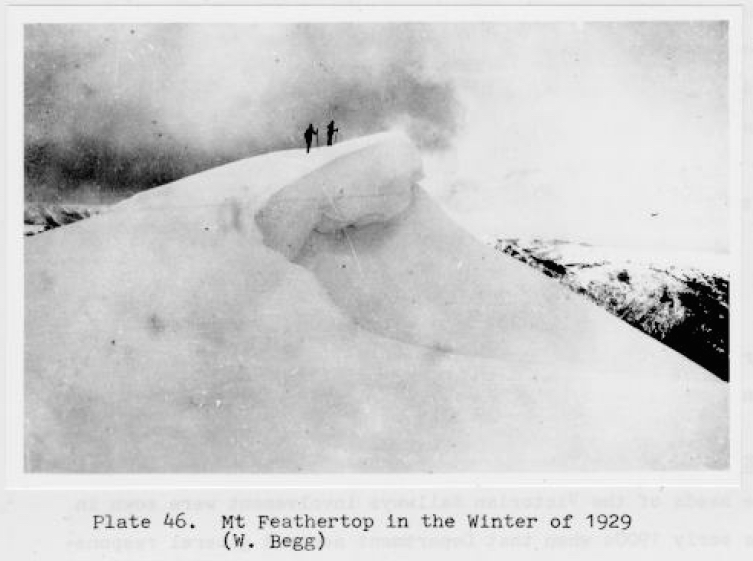 From 'Mount Hotham: Its History From the 1850s to 1950s', by Peter Cabena (Research Officer - Department of Crown Lands and Survey) 1979.
Reactions: Mister Tee on XC Skis, Pink, Chaeron and 1 other person

I think I used a version of the same photo by Warrand Begg in the section on cornice collapses and avalanches, and wrote words that effectively said "if you do this, you will die".

EDIT. Warrand Begg, the bloke who took that picture, went on to spend the next 50 years as a prominent skier. He wrote a delightful article in the 1936 Aust Ski Yearbook called "A winters work" describing his job as a new graduate working for Kiewa Hydro. He had to record measurements of major snow gauges each day and ski toured all over the Bogong High Plains checking other gauges every week. He lived in Cope Hut and had a few domestic bothers like his eggs freezing solid. It's a well written, fun read if you can get your hands on it.
Reactions: Chaeron, skifree and Total Whiteout

This is another cracker of the cornice, but I stupidly haven't written down my source for it... 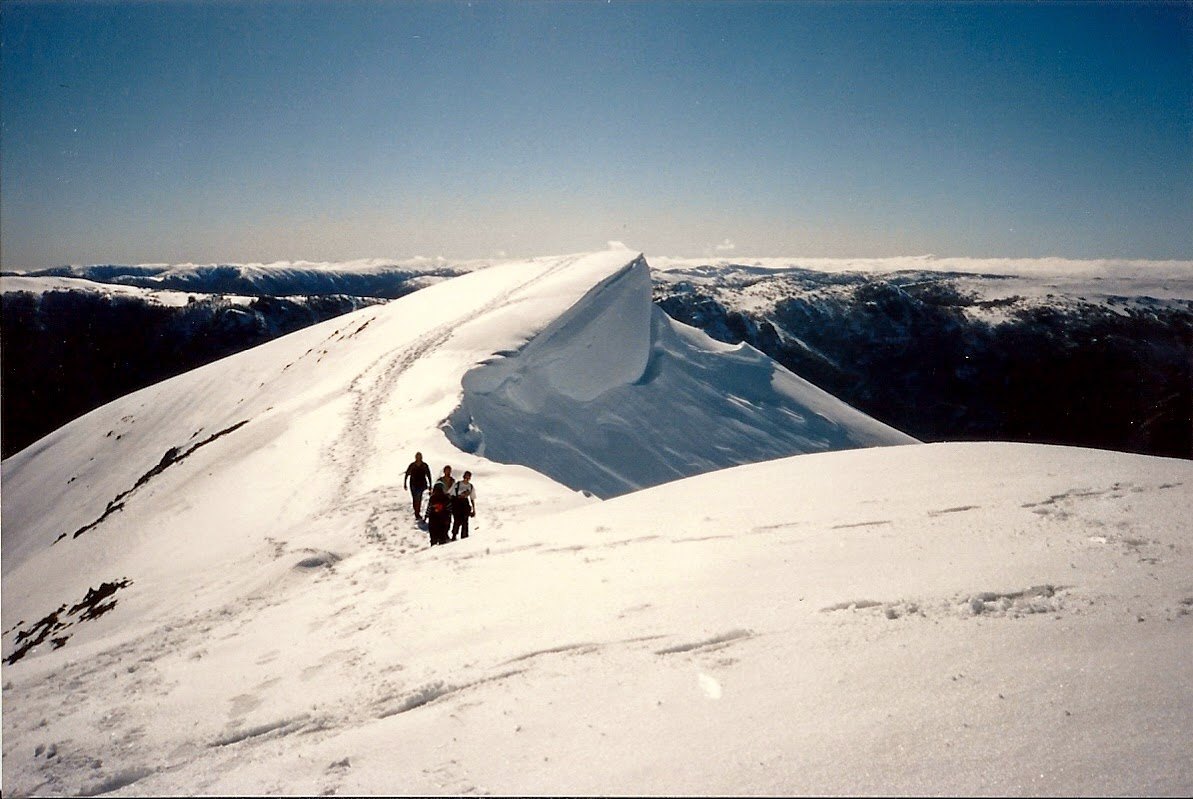 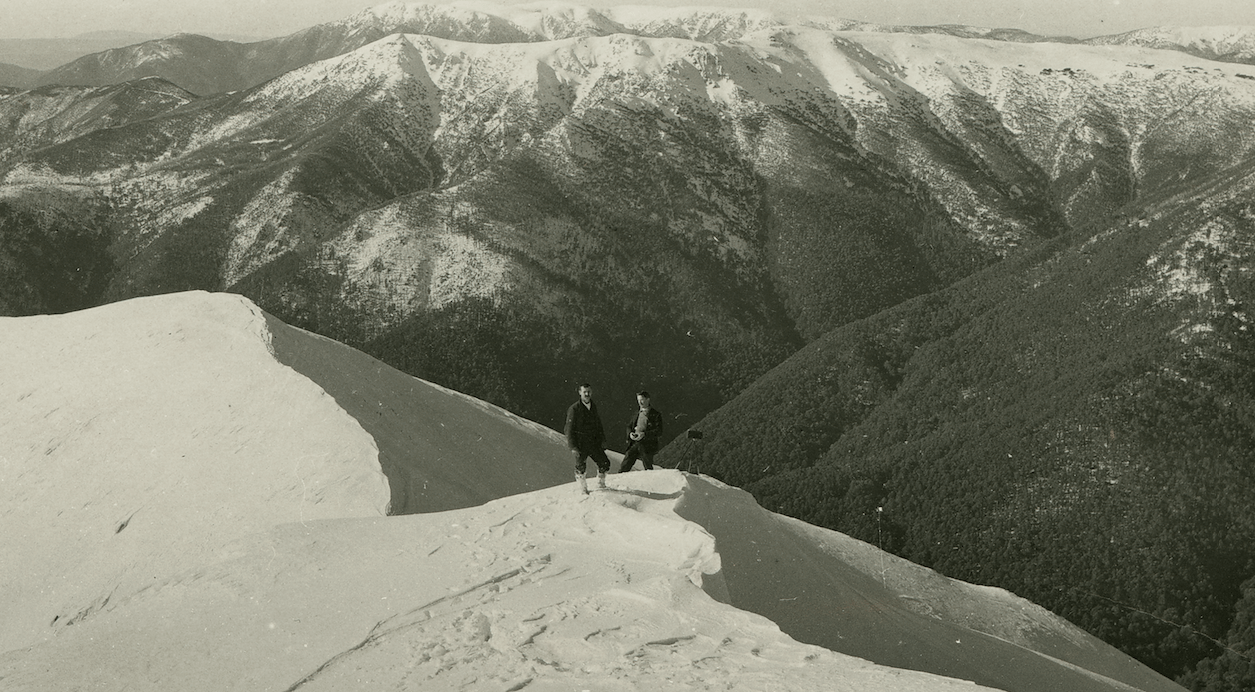 At some point a marker was added to the summit cairn. I've zoomed in and cropped this photo slightly.

Not entirely conclusive but if you zoom in as far as you can, to my eye, you can still see a faint outline of the cairn in 1946...

Total Whiteout said:
Not entirely conclusive but if you zoom in as far as you can to my eye you can still see a faint outline of the cairn in 1946...

Total Whiteout said:
This is interesting.

At some point a marker was added to the summit cairn. I've zoomed in and cropped this photo slightly.

Geo-survey trig beacons of various types which supplemented cairns were introduced across NSW/ VIC at some point - that timing should be able to be determined probably from this source:

It is a subsequent next generation of beacons whose remnants can currently be found on many peaks, some still survive.

From memory - by example on Mt Torbreck the remains this type of third generation beacon lies discarded near the summit. Similar type on Arapiles - some on a tripod of long steel pipes.
Reactions: skifree

ill have a read when I can. My only comment though is that the design of marker seems to have changed between the two photos. The first photo c 1929 is marked with a sort of mast / cross type of marker, while the second photo I've posted is marked with a more contemporary tripod / quad pod type marker.

Which also suggests the marker was actively maintained for a period.
Reactions: skifree and Chaeron

The cairn was still there in 1953: p7 Melbourne Bushwalkers Bogong circuit report by Norm Richards. 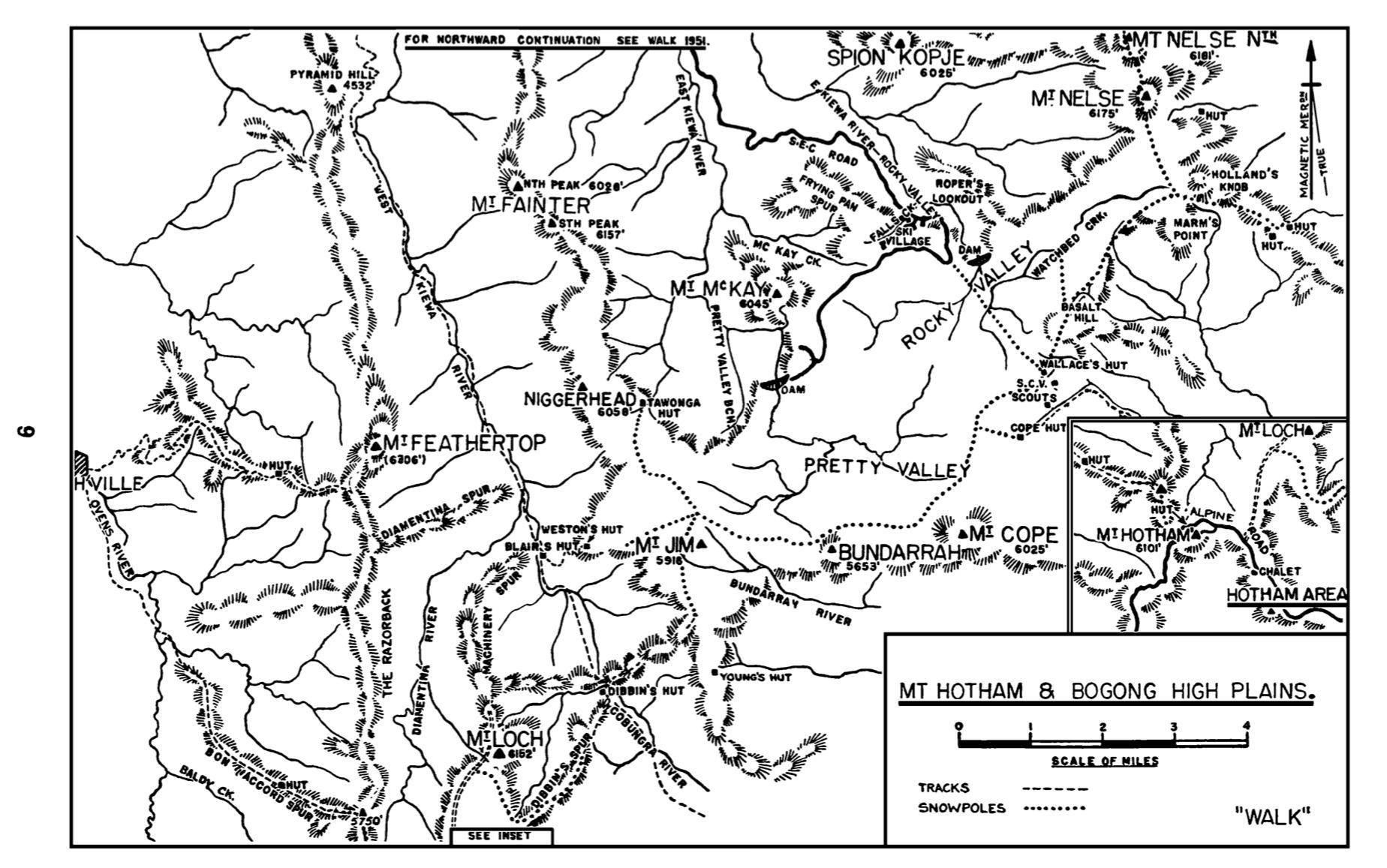 Awesome find (though from what I can see the reference to the cairn is page 5 - not 7 - and map is page 9). But another break through!
Reactions: Chaeron

Most years the annuals Walk and Melbourne Walker had roundups of hiking related news in them. So once we have the latest date the internet can provide for the cairn, I'll pull my sets of them out and check the years immediately afterwards to see if there's any mention of the demise of the cairn.

That's unless Trove has recently uploaded searchable texts of them. That would make it slightly easier.
Reactions: skifree, Chaeron and Total Whiteout 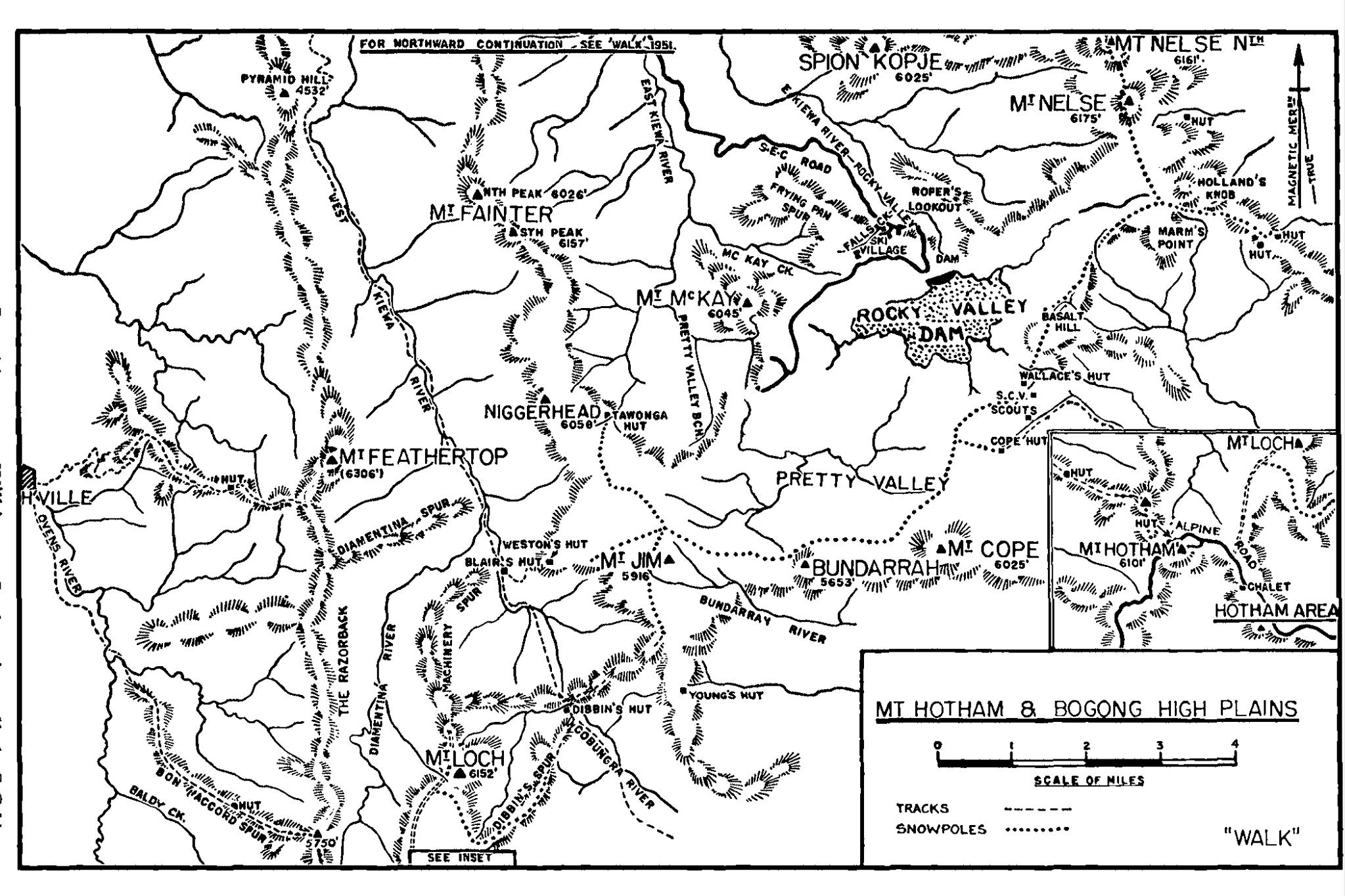 I first climbed Feathertop in summer when I was pretty young in the 1984 or 85. I don't recall any semblance of anything cairn like at the time and I was the sort of kid to make mental notes about things like that. Of course someone may have built a modest cairn subsequent to my first ascent, but I was also up there a few more times in the 80s and 90s and many times in the first decade of this century and it doesn't trigger any memories.

Of course my memory could be shaky, it sometimes is.

I would have first climbed Feathertop via Razorback as a kid around 2002 or 2003. I actually do recall there being a small cairn on top. But I think it was more of a recent amateur thing built by modern walkers.
Reactions: Chaeron 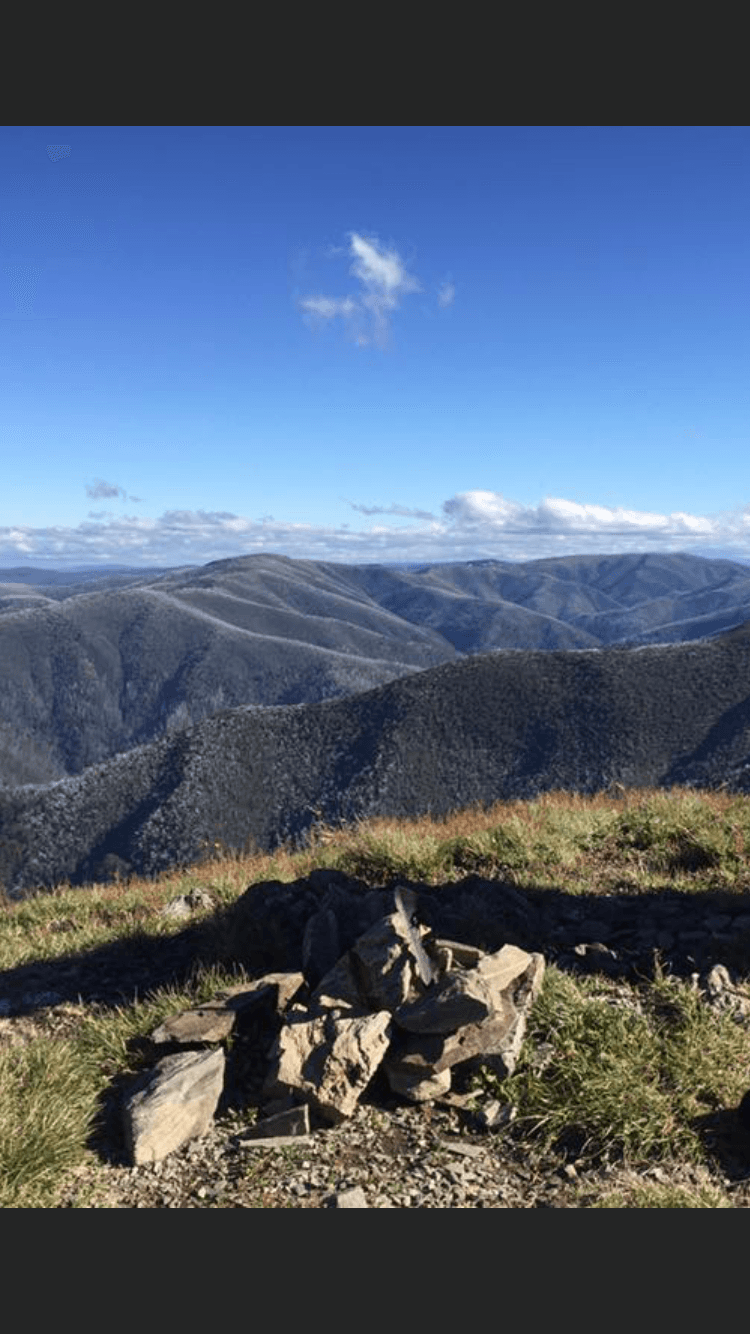 Last I was up there in 2016 there was this very small collection of rocks at the top.
Reactions: skifree and Chaeron
You must log in or register to reply here.
Remove ads with a
Ski Pass