No outrage about buildings in the WHA?

Yep, and they made the same mistake twice!

It doesn't look as roomy as the late lamented Sitzmark Lodge that they knocked down a few years ago, but at least there is now a replacement. In 2016 a friend and I spent a ski weekend in Tassie (fly in on Sat and ski at Mawson, Ben Lomond on Sunday and fly home). Being crowded into a shipping container when the weather turned foul was a rather claustrophobic experience. But the STSA used our presence to lobby for a Sitzmark replacement.

Last weekend was a big one at the Mount Mawson Ski Field in Southern Tasmania. There was a good crowd of skiers and boarders keen to try out Tasmania’s retro rope tows – including interstate visitors who had flown in especially for the Mawson experience... Unfortunately. conditions deteriorated to rain and strong winds. Children were soon dripping wet, and everyone was looking for shelter. This is when the inadequacies of the current temporary shelters provided by the Parks service became very problematic. There were school groups of young people unable to get into the shelter as it was too crowded, the vestibules of the shelters were full, and inside the shipping container provided for visitors it was standing room only... Link to full Media release. 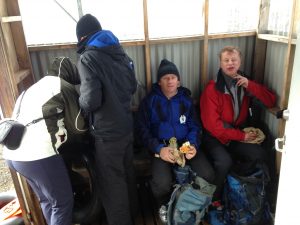 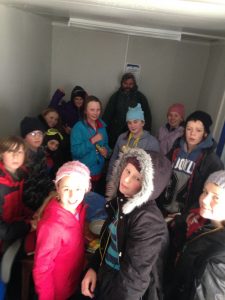 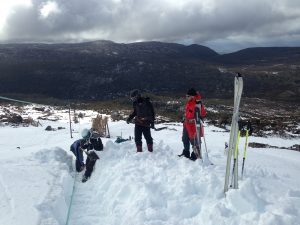 Bogong and friends seeking shelter in vestibule.
With fond memories of old Sitzmark, my friend and I were more than happy to pose for photos and provide the STSA with a few quotes from 'interstate visitors' they could use to lobby for this new Sitzmark.
Reactions: currawong
You must log in or register to reply here.
Remove ads with a
Ski Pass
Share:
Facebook Twitter Reddit Pinterest Email Share Link
Top Bottom