Hi
Your correspondent in the field rose at 5 am today, Tuesday 17th /9/19 . I went to collect @Carola from her abode just after 6 am. We drove off towards Moe but the congestion in the Metro zone was already building at that hour.
We finally reached the MSG car park just before 10 am and were moving by 10 am.
There had been a dusting of fresh snow overnight and some of it had accumulated in the vegetation.
The snow cover was nothing like it was 9 days earlier however it was soft, fresh, wet and forgiving. There were some bald patches visible on the morning ascent which by the time we returned were much more pronounced.
The plan was to try to reach Baw Baw Village and head back to MSG car park in the same day. The Parks Victoria employee at the MSG car park recommended taking the unmarked trail up Toullicoutty Glen .
On the trip up I had to take my skis off once or twice on the Cascades(footprints) trail.
Once on the plateau the snow cover was overall very good to ski on and we had fresh tracks in many places.
Having arrived at Camp Saddle and the Rock Shelter/cave we elected to by pass the AAWT permanent pole line up to Mt. St. Phillack and Mt . St. Phillack black run and drop down to Toullicoutty Glen. This was simple for @Carola who was sporting her new snow shoes. I went and attempted to ski down the decent drop off Camp Saddle using half plough turns and had two crashes while trying .
The Baw Baw plateaux intrigues me for BC XC skiing & white season exploration but I do find it to be rather challenging what with its bumps, twists, sudden drops , rocks, trees, ascents ,creeks, traverses etc. .It is in many ways tougher to ski than the various kinds of terrain found at :Lake Mountain ; The Bogong High Plains; Mt. Buffalo and Mt. Stirling .
There is still quite a bit of snow above 1450 M. esp. off track in the true back country of the Baw Baw N.P..
We noticed that many snow bridges over creeks were melting and the sounds of the snow gum forest thawing out and running water were omnipresent.
We contoured and traversed around the hillside near Thomson's Run in an off track Back Country (BC) route, following another skier's fresh tracks and dropped into Freeman's Flat where we searched for a creek crossing. Then we headed up the hill towards Howitt Hill and The Tors.
Having seen the communication tower on top of the hill opposite at Baw Baw Resort we were so near and yet so far from both the all season permanent Pole line to the village and from the resort itself. The time had almost struck 1300. We decided to drop back down to get out of the dripping trees and eat lunch. After lunch we turned around and headed back following our own tracks.
We met another skier who saw my ski tracks coming along the BC route we had taken and he said I had done quite well. I thought it was tricky and I used quite a bit of side stepping , herringboning and snow ploughing to remain mostly upright.
I did have a spectacular over the handle bars crash on the way back , having launched myself down a long clear decline , I turned one way at speed and went to turn the other when I lost the plot and my balance and went flying and face planted hard into the soft deep Spring snow. My legs and skis were seen going every which way. I need to concentrate on my balance and where I am going and look ahead.
@Carola liked exploring the back country off track but was happy to return with a clearly traceable route back and with enough time to relax and not worry about getting back too late.
I had a couple more falls from which I quickly pulled myself up and skied on from , but the worst one was when I was back at St. Gwinear flat.
I had clicked out of my skis and was lowering myself off the snow pack down to the wet slippery wooden bridge over the stream when I lost my footing and went head first backwards into the stream .
It was very cold and my lower body was still on the bridge while my upper body was stuck in the ICY stream and unable to get up. I was like a beetle stuck on its back. .
I must say I did not expect that to happen and thankfully @Carola helped me to get up. It quite freaked me out , man. We had a break while I re arranged my attire and re calibrated my equilibrium. My gloves, helmet , sun hat , camera and Thermal merino wool top were all wet. I usually carry back up gloves, back up head gear and a PLB as well as an emergency Bivvy bag.
So I had something to work with for gloves.
Having had some high speed XC ski falls on soft snow ( you have to try these back country descents and turns in the Baw Baw N.P. ,
crash or crash through !

) and capping that off with an unplanned dip in the snowy stream,
I was very lucky that
I was not seriously hurt other than sustaining a hit to my confidence, credibility , reputation and ego.
Wearing a helmet is good. Snow ploughing the big VEE is not for sissies!
Being only about 2-3 km from the MSG car park we regrouped and headed up the pole line towards the MSG summit. Being a clear spring day we could see the Thomson Dam and the Vic. Alps in the distance to the North East with a covering of snow on them.
I slipped over on my rump a couple more times before I pulled myself together , focussed, steeled myself and skied the last 1km or so back down the hill , back to the car park quite well with many turns and some speed and went out of my 2019 VIC XC ski season on a positive note.
I did have to take my skis off once or twice or thrice again on the way down .The snow is melting quickly in places and is still quite deep and untracked in others.
Much more melting of snow had occurred this week and this was looking very much like the last Hurrah for MSG for 2019.
Overall it was a big day out and we reached the car at 1630 .There were others who were also returning on skis then . We drove off at 1700 and were back in the Melb. Metro zone by about 2000.
Next season we will camp out the night before near Walhalla so we can start early and see if we can reach the Baw Baw Village in a day by the pole line or investigate Mustering Flat and some of the AAWT towards Mt.Erica .
I will post photos soon.
Last edited: Aug 10, 2020
Reactions: neilmny
N

Good thing you weren't solo on that trip Mr Tee. It would have been a very frightening situation.

neilmny said:
Good thing you weren't solo on that trip Mr Tee. It would have been a very frightening situation.
Click to expand...

Yes, I realize that now. There were other park users in the area but the very cold water gave me a fright and I became helpless for a moment that stretched out for an eternity. It was not deep enough to drown in and I am a very strong distance swimmer .We were only 90 minutes away from the car. Nordic Skiing the back country might be slightly dangerous but crossing spring melt water courses with skis off is now rated as more risky than previously surmised.

Sept. 17th 2019 .The MSG Adventure
(no , not the East Asian restaurant take away menu, the Baw Baw N.P. in spring) . My last day of XC skiing in VIC. for 2019. I am going to the K.N.P. this Saturday and then I suspect that will be it for me on planks for this year: 2019 Has been a big year for XC skiing for me . However never say never. The lure of the opening of the Charlotte Pass Road later in October may prove to be too strong .I do need to get some lessons early in the 2020 ski season and increase my range of skills to work on such as the skidded ice hockey stop, telemark turns, parallel turns etc.
I think my SLR digital camera survived the submarine service and will remain serviceable.
My guardian angel was watching over me on 17/9/19. 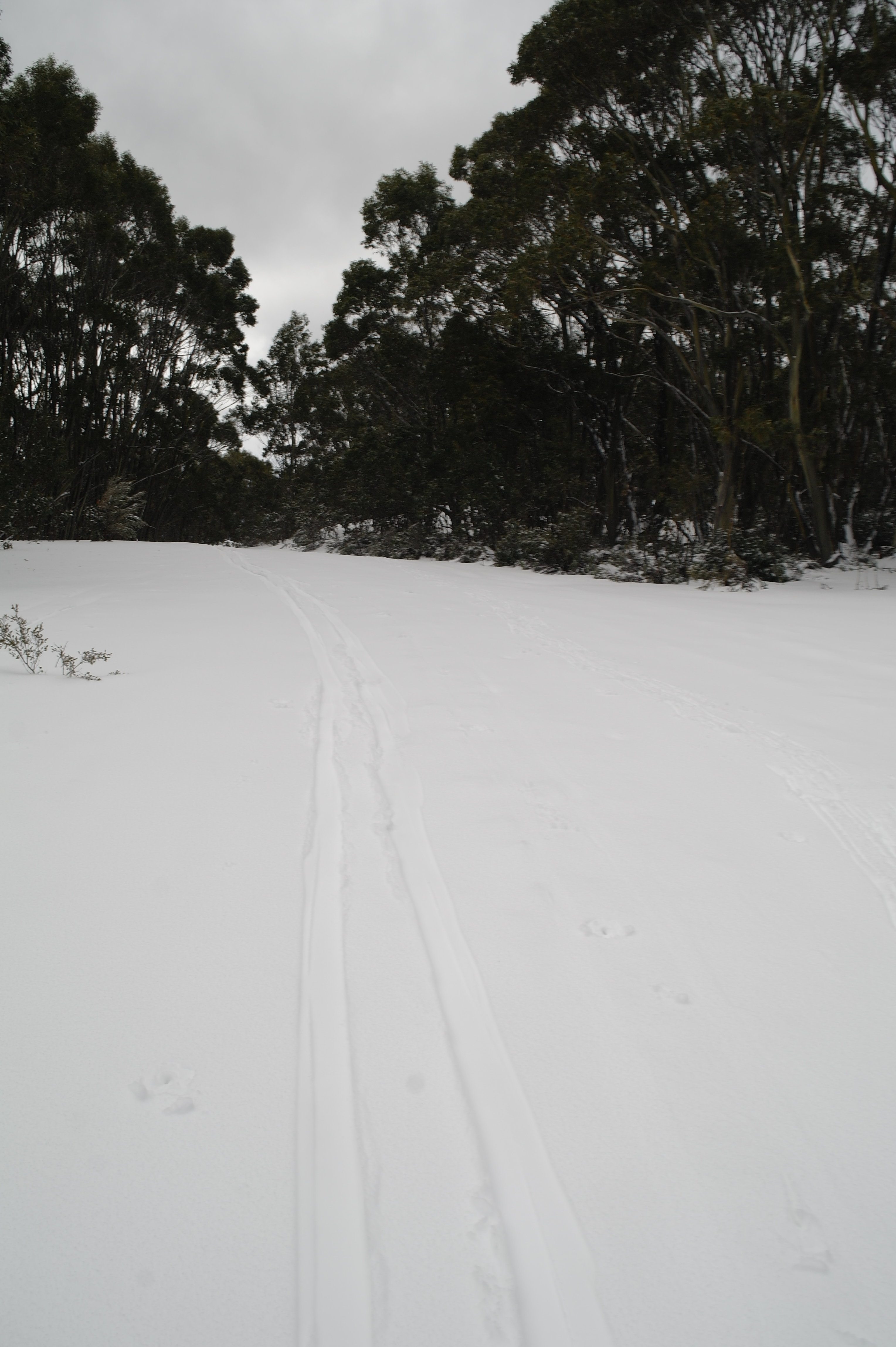 Baw Baw N.P. .17th September 2019.Generally mild clear weather with good visibility.
I don't crash much when skiing the Bogong High Plains, such as out to Edmondson's hut on 10/9/19, I did not crash at all. The Baw Baws seem to be a bigger challenge in a different way with more tricky obstacles and terrain. I seem to crash more often up there. 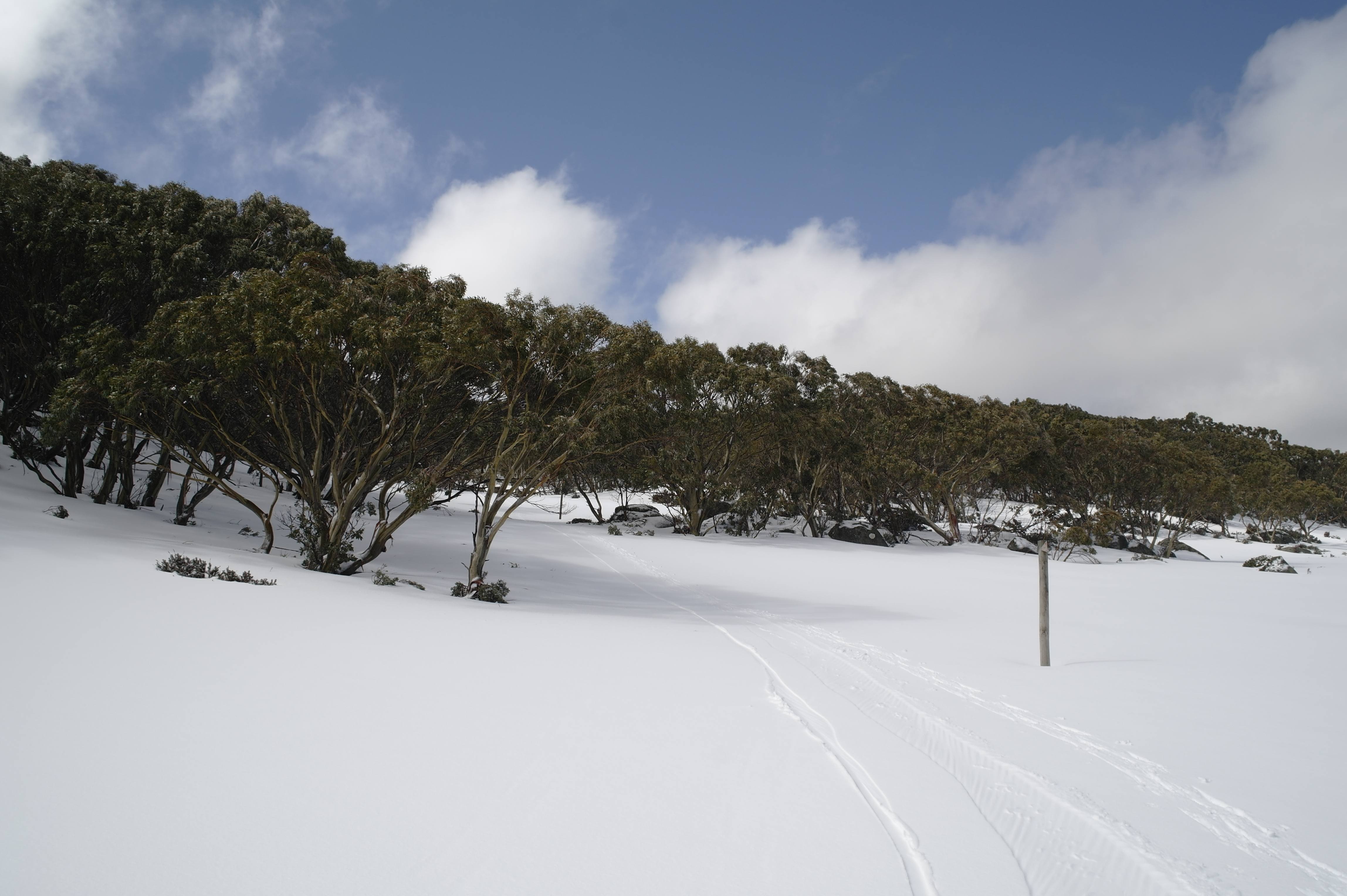 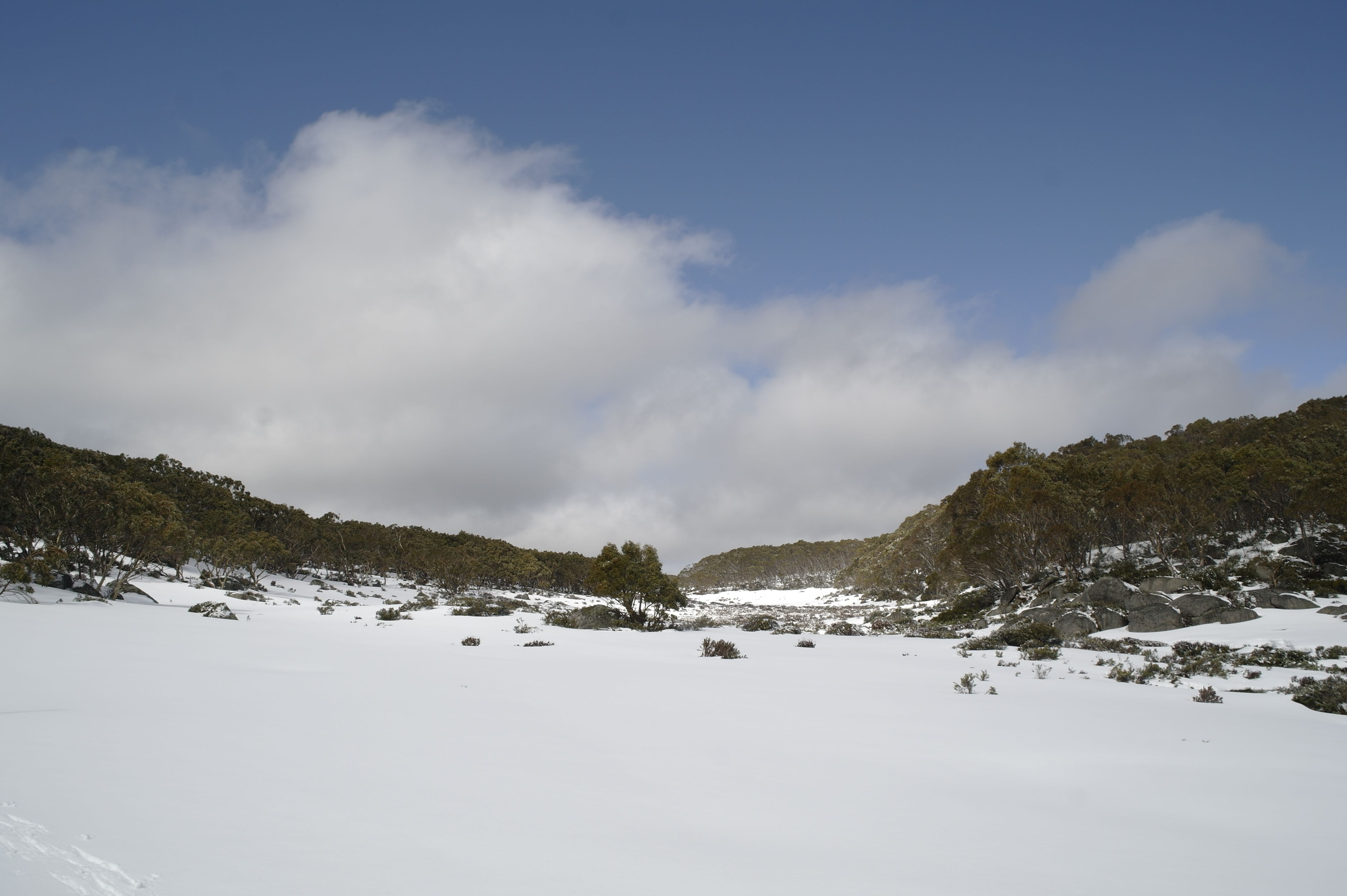 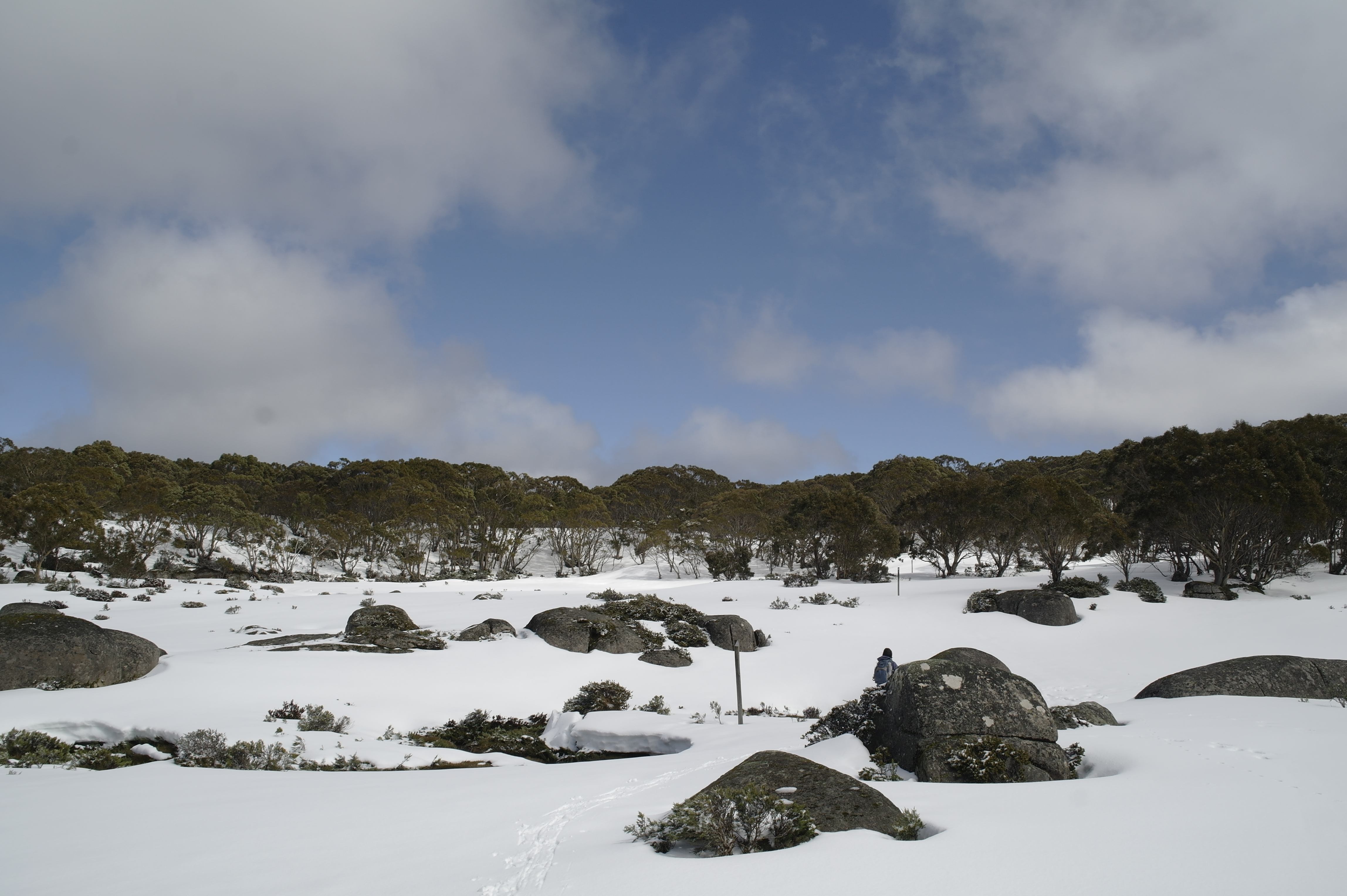 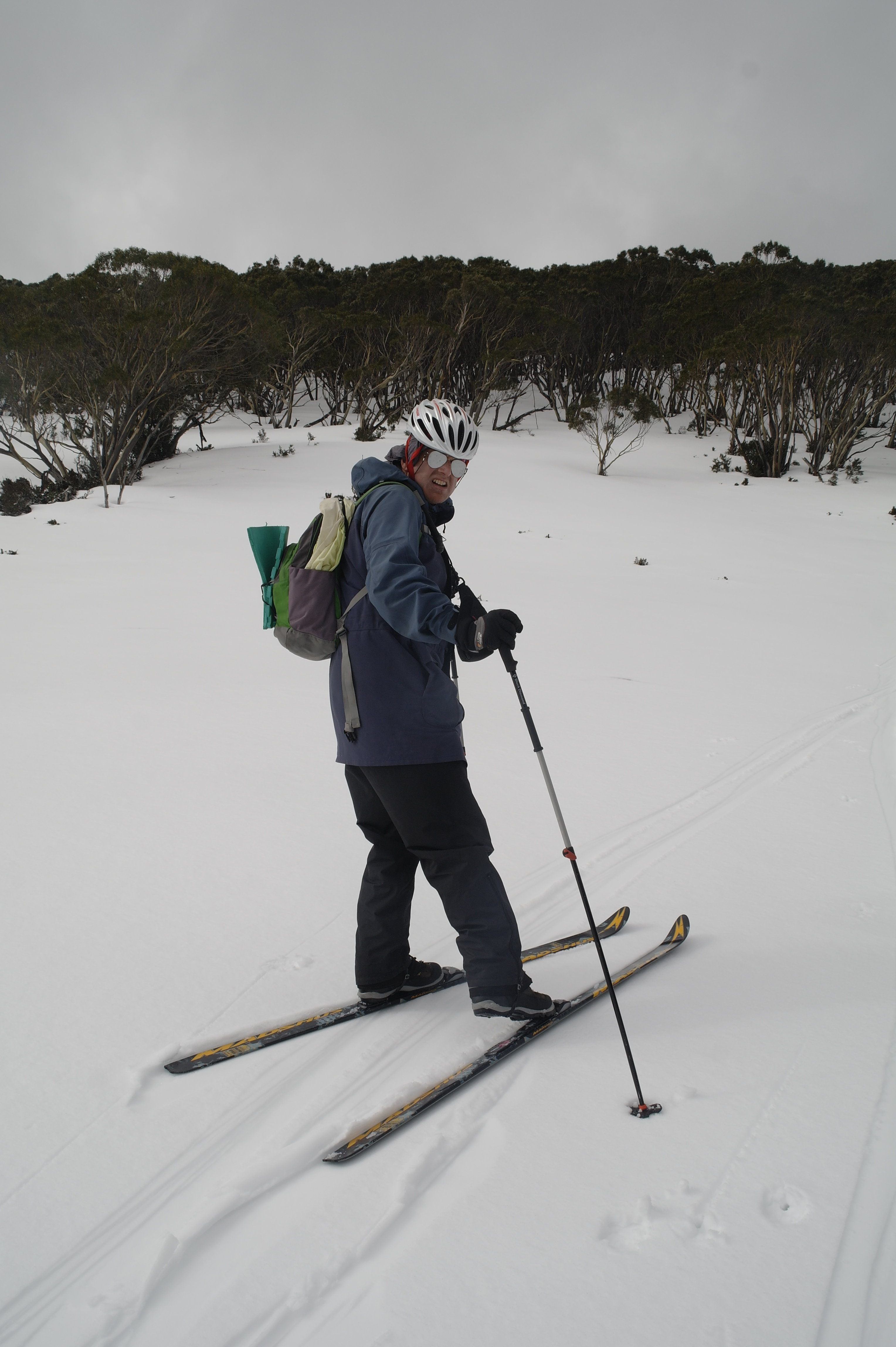 If I stop and think about it , I bought those Madshus Epoch skis in late 2017. I could not really ski to save my life then. Now I can accidentally fall into a freezing spring thaw creek backwards , head first :-0 and still ski out of the B.C. back to obtain some dry clothes and a thermos of tea at my car.
A true newbie would have got the fear and said "no more plank action for me thank you very much !".
The best XC ski trips this 2019 season included: the XC Ski trip down from the Bluff Spur Hut at Mt. Stirling back to TBJ; Falls Creek to Edmondson's hut and back in a day solo; Skiing the Jubilee Loop at Lake Mountain in a blizzard; The Reservoir Rd. at Mt.Buffalo the day after a blizzard; The J.B.Hut to Wire Plain ( and back) ski day solo in August; and earlier in the season TBJ to Howqua Gap hut and back at Mt. Stirling. One should not forget that my skiing for 2019 started in late May / Early June 2019 with trips to Lake Mtn. and Falls Creek before the resorts had opened! .
You can see the evil wooden foot bridge of doom in the pictures below. Micro spikes would have been better but fatigue can lead to errors too. 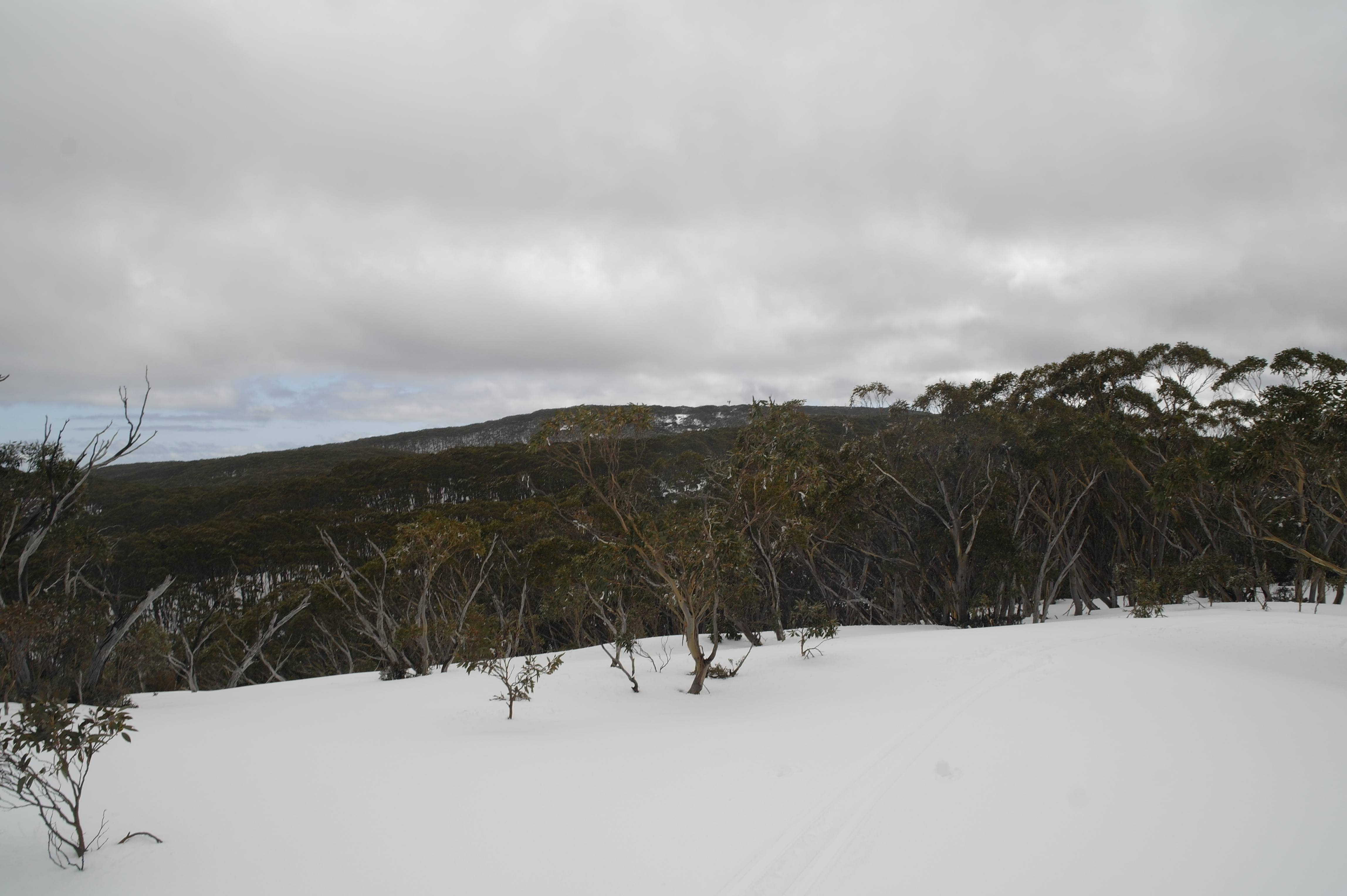 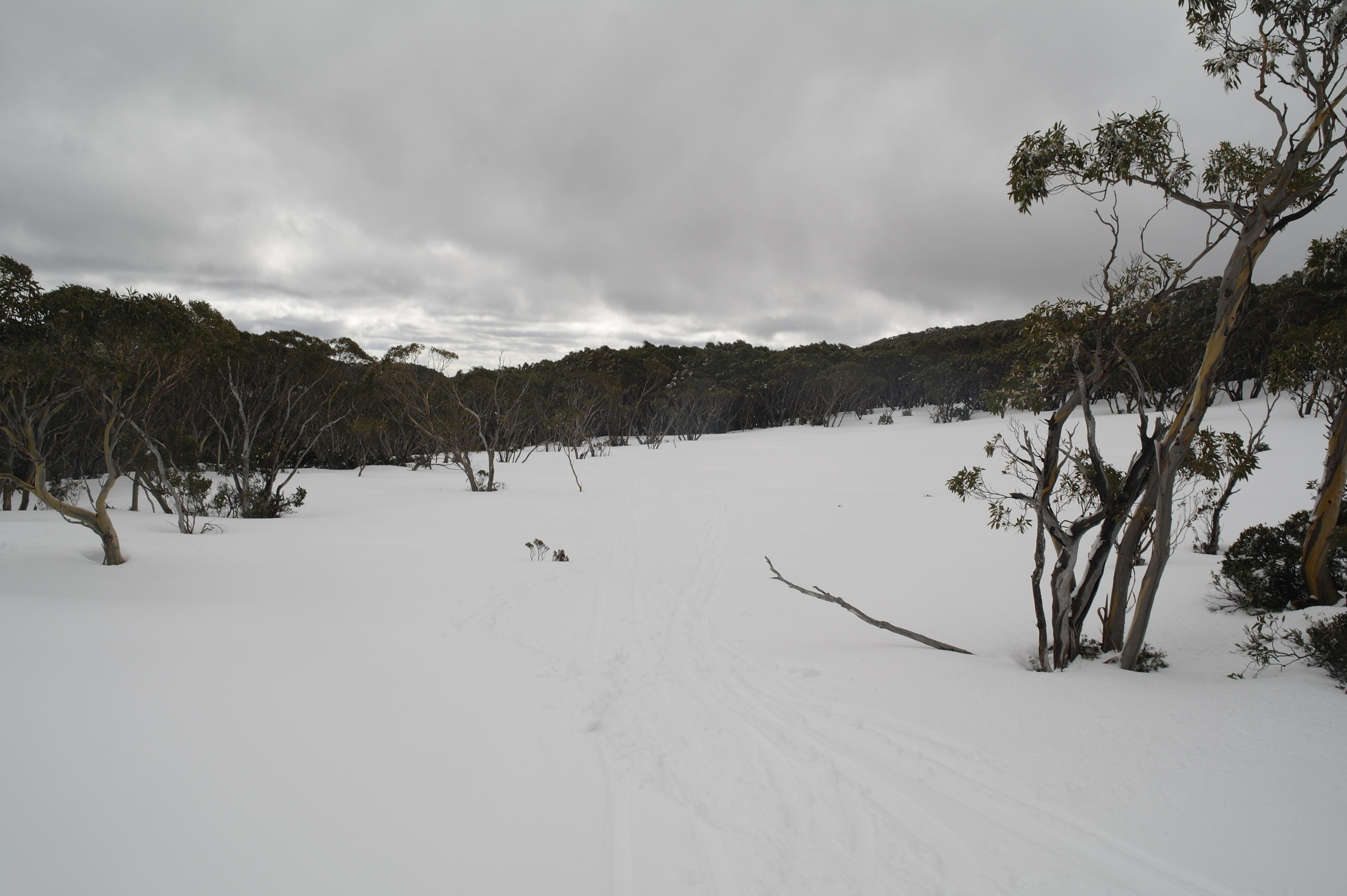 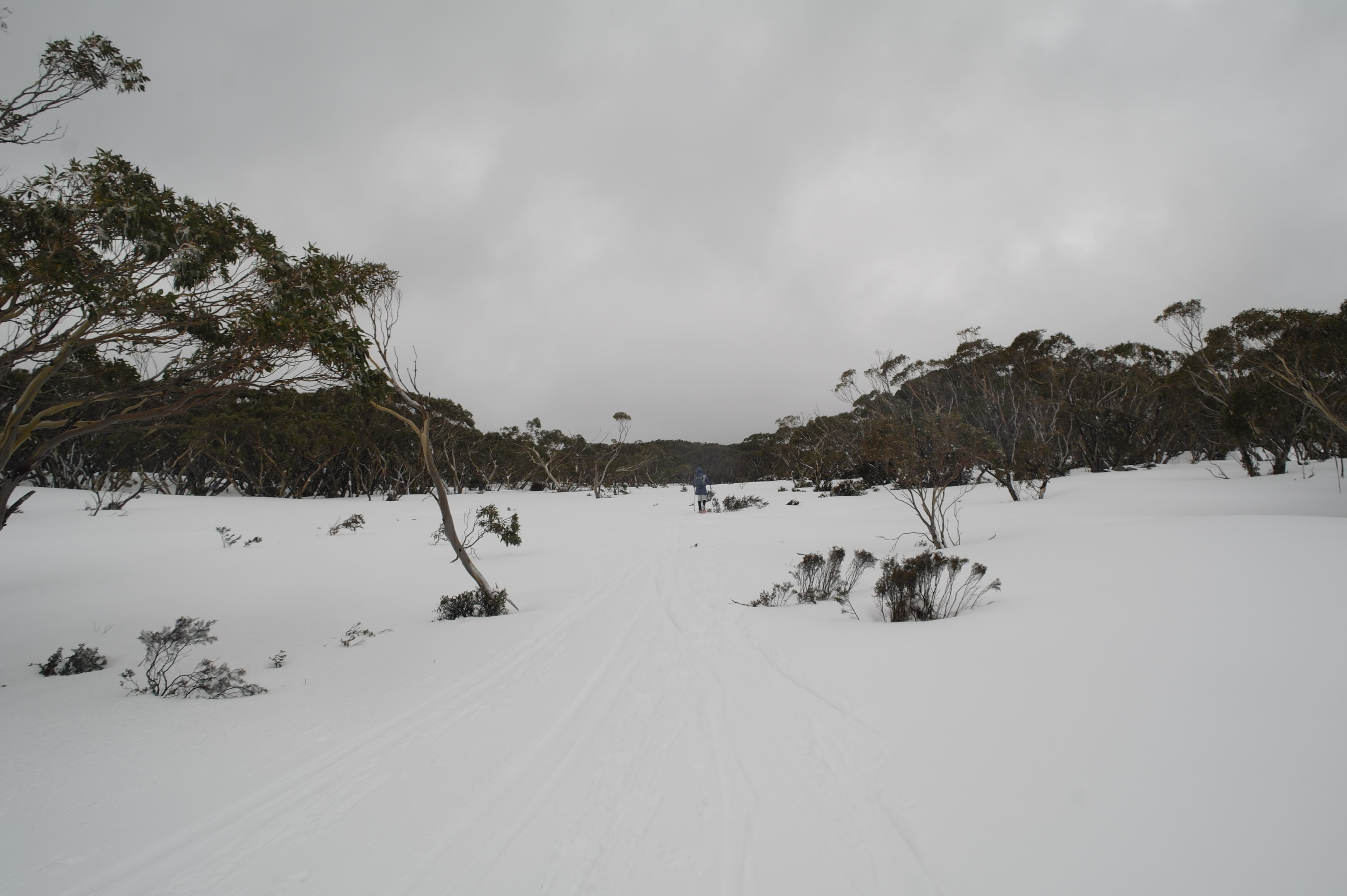 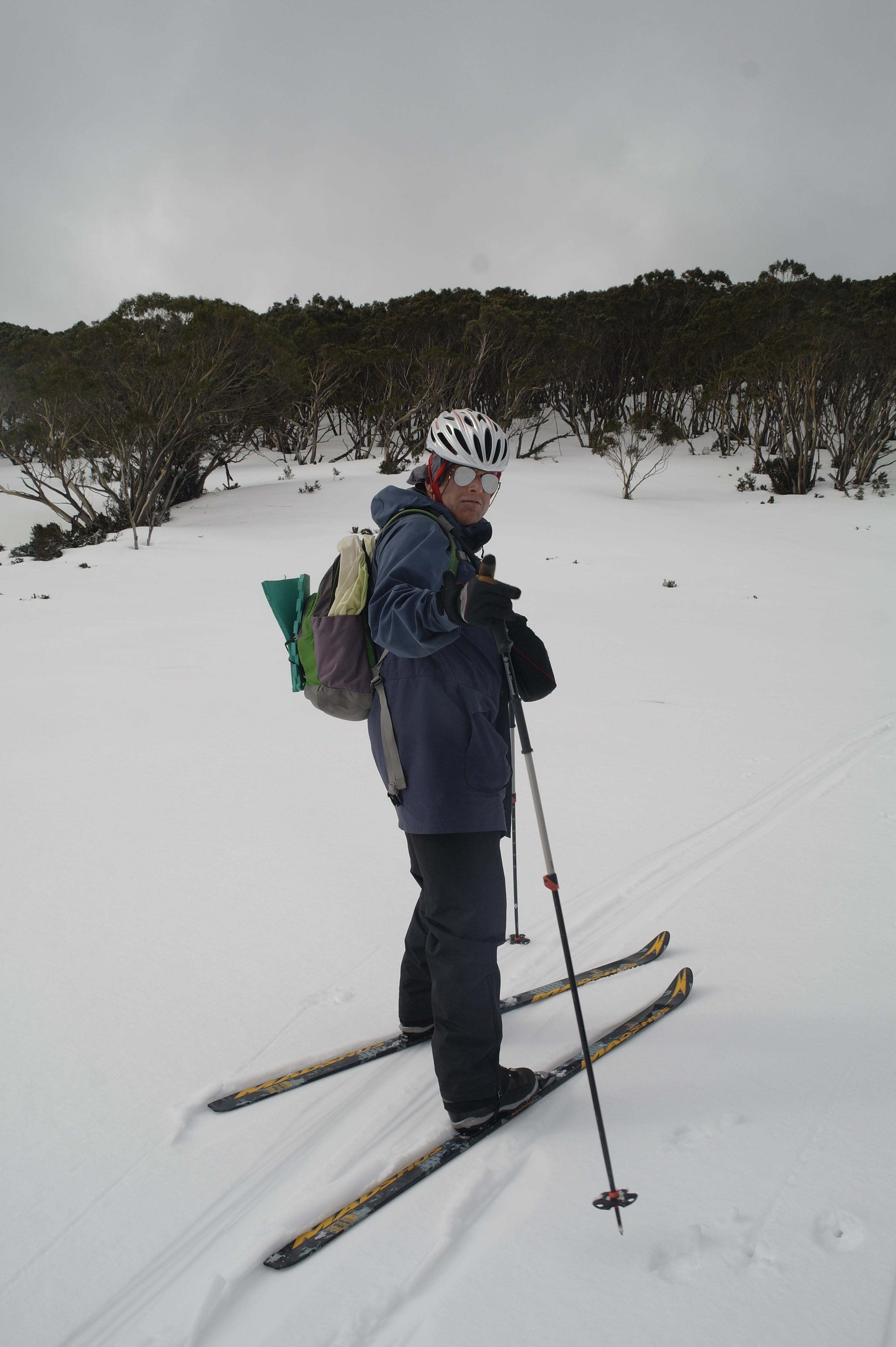 The evil slippery wooden bridge of doom at St. Gwinear Flat . I will be more careful in future at creek crossings in spring melt conditions. 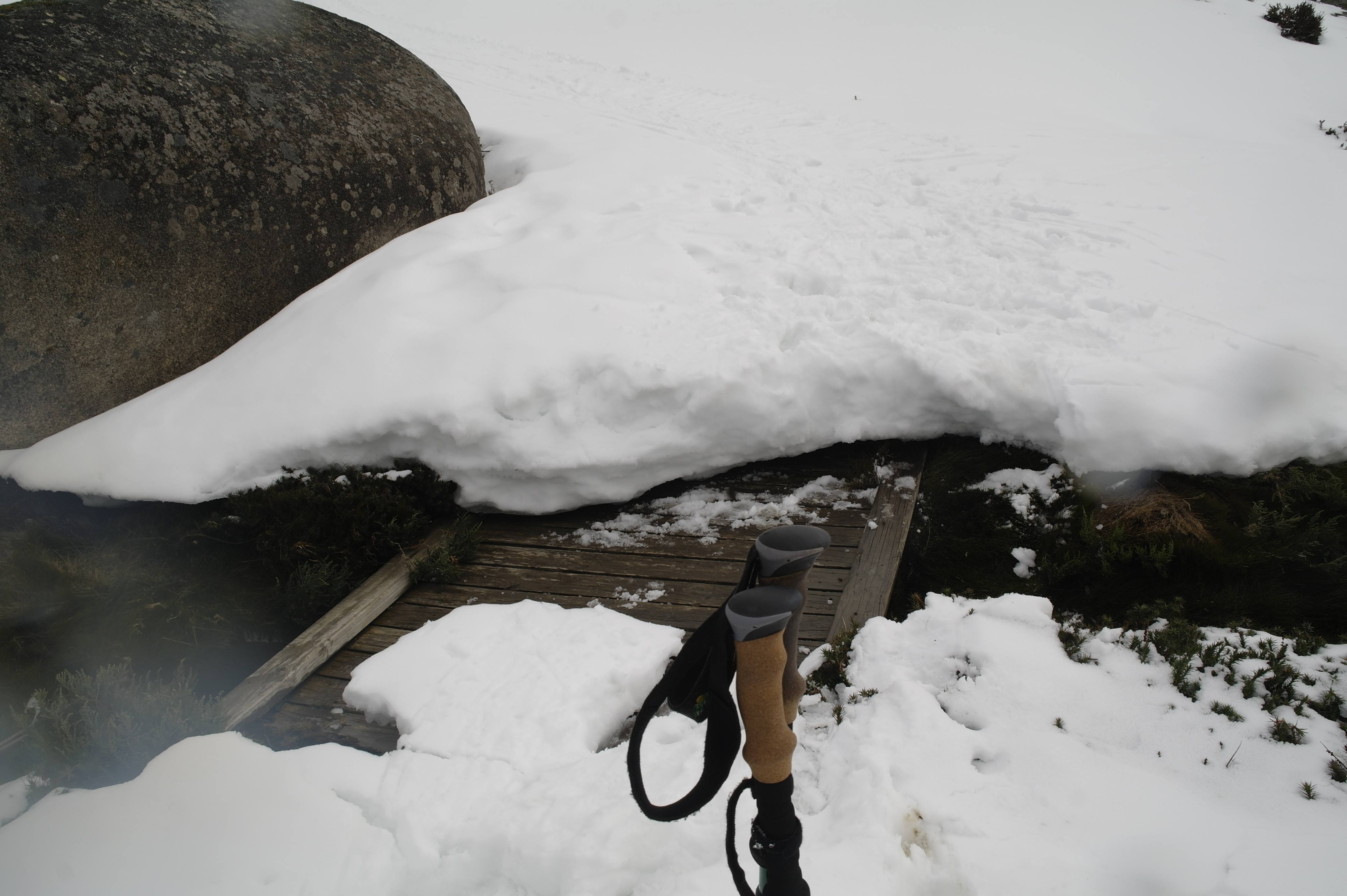 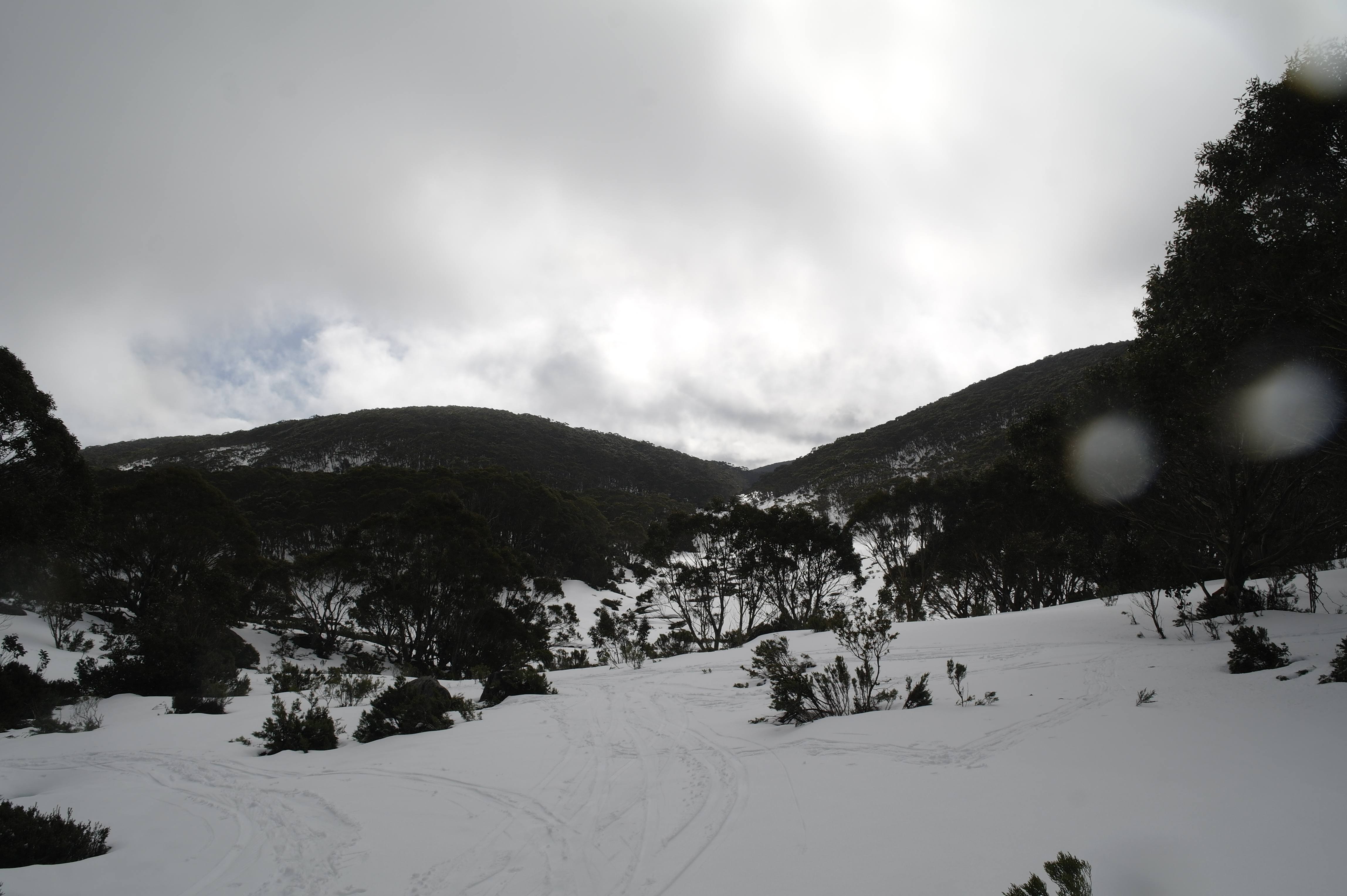 Some photos from @Carola
including one of me getting up after another spill.... 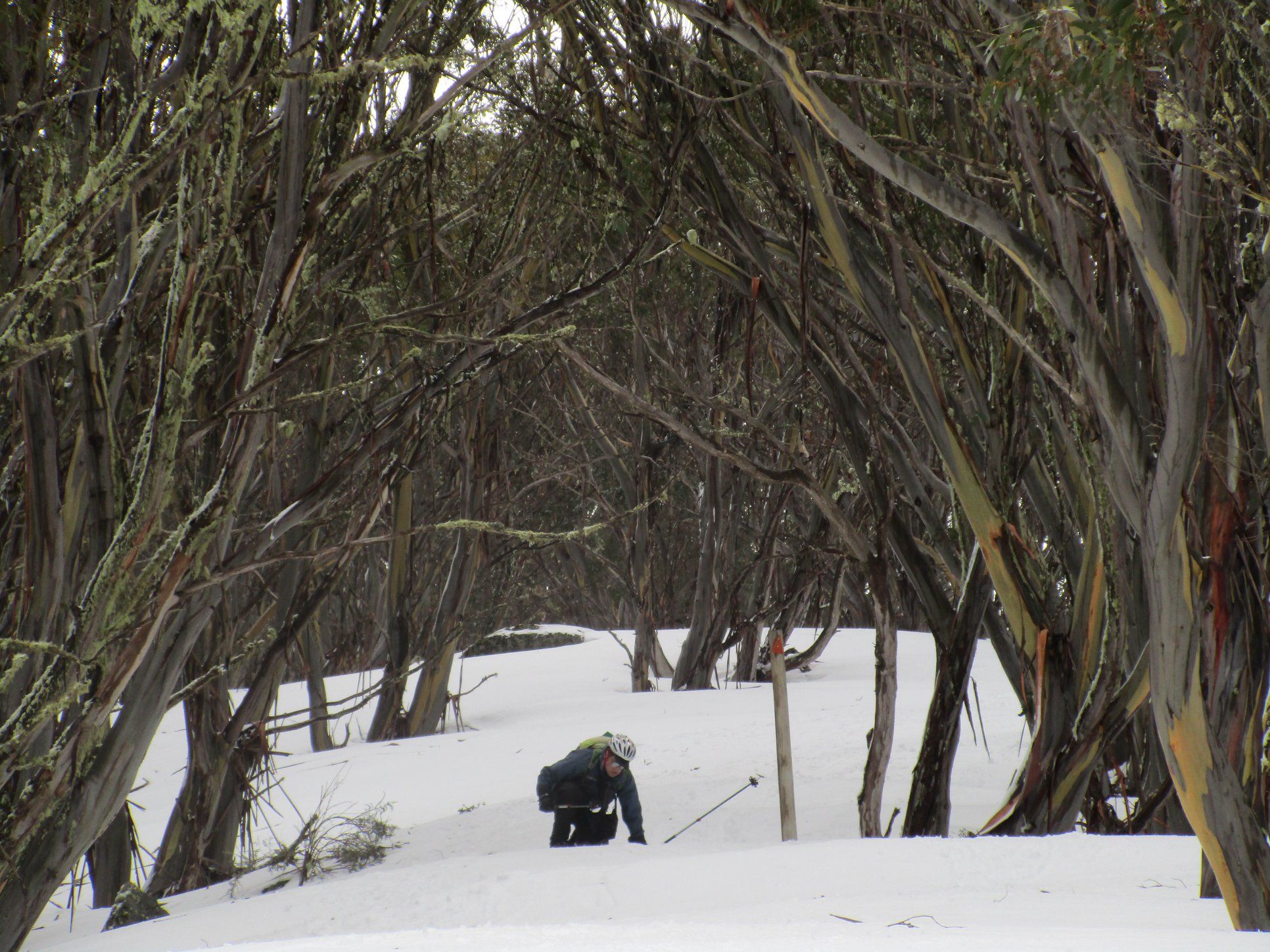 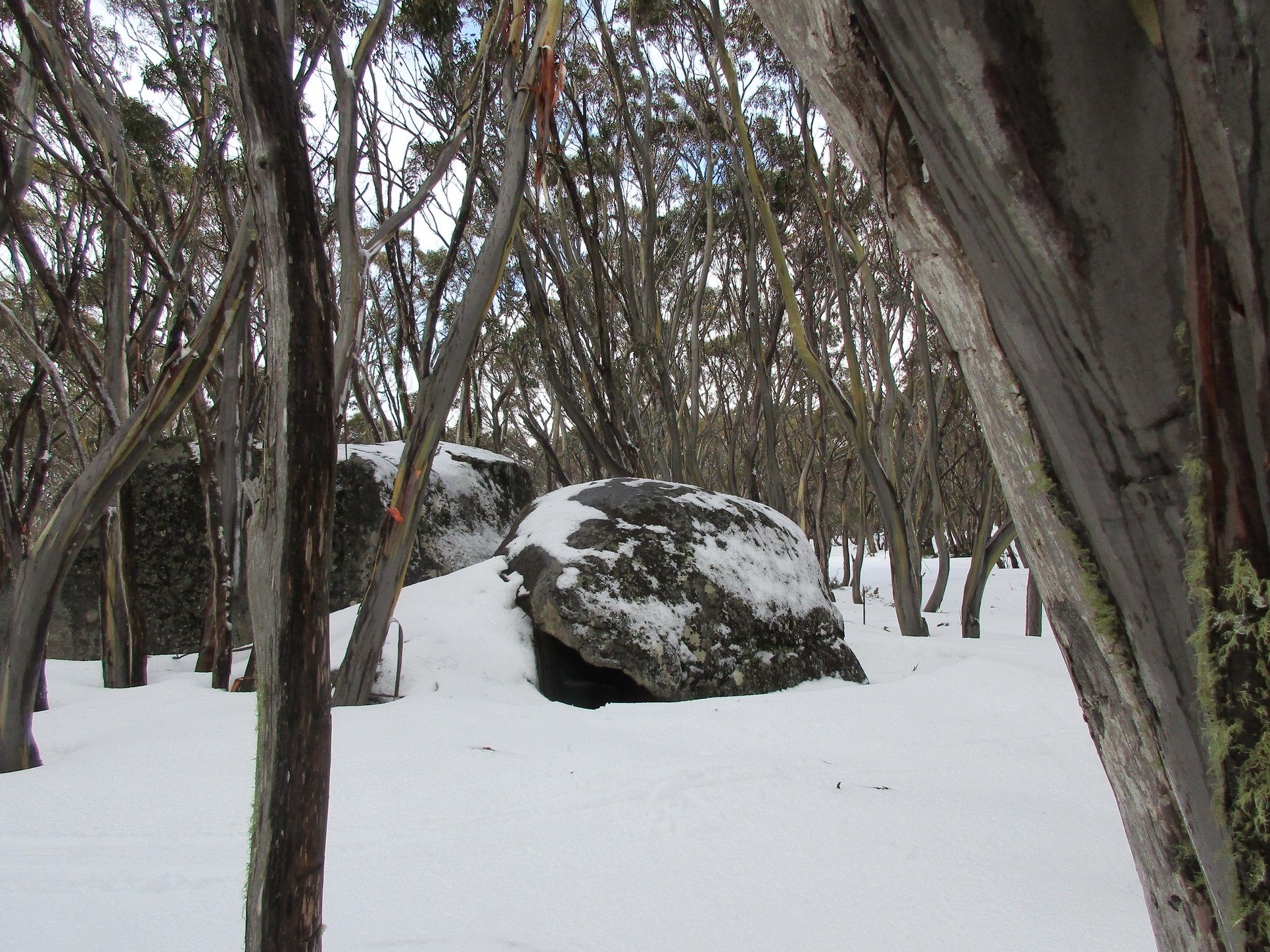 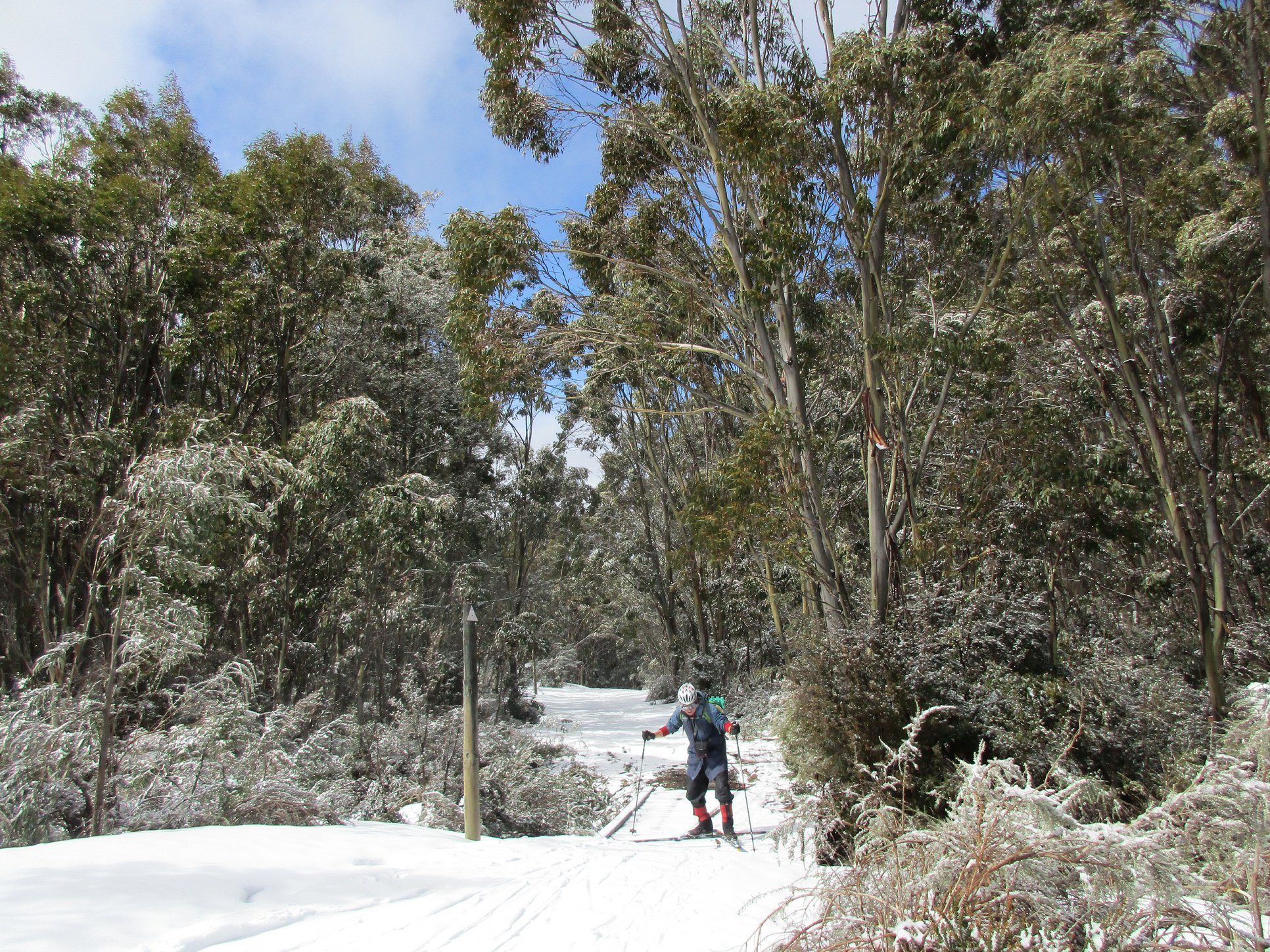 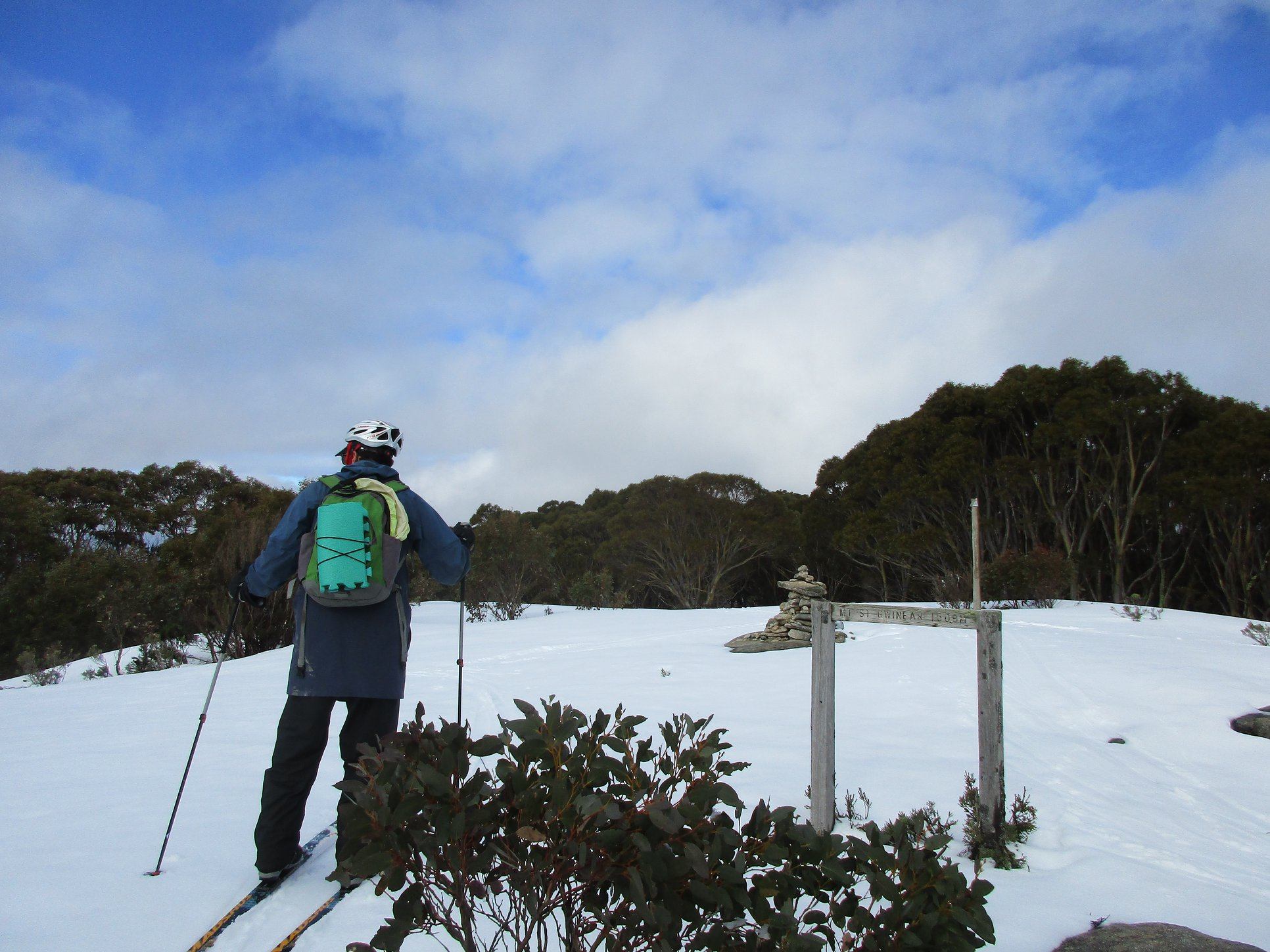 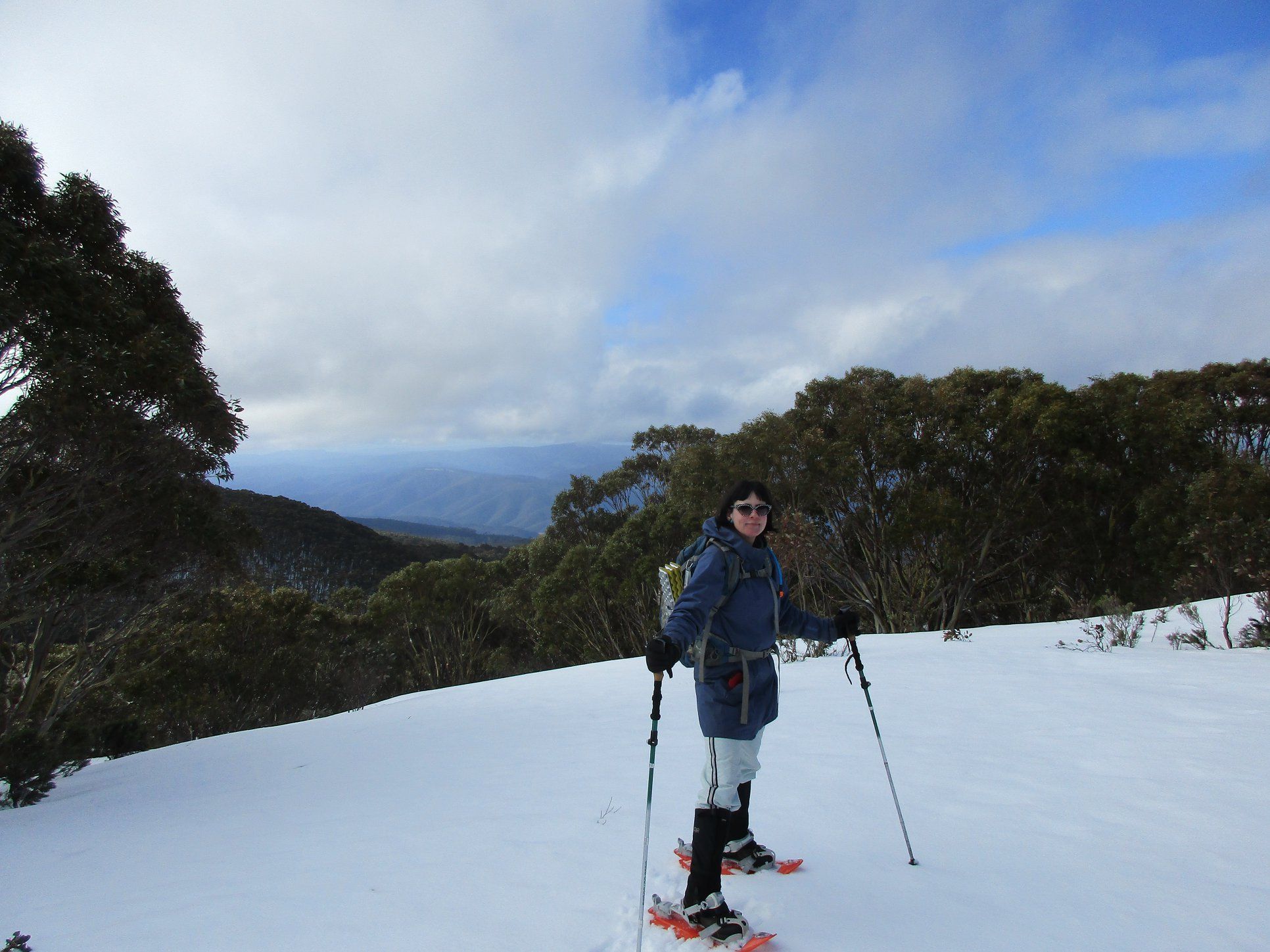 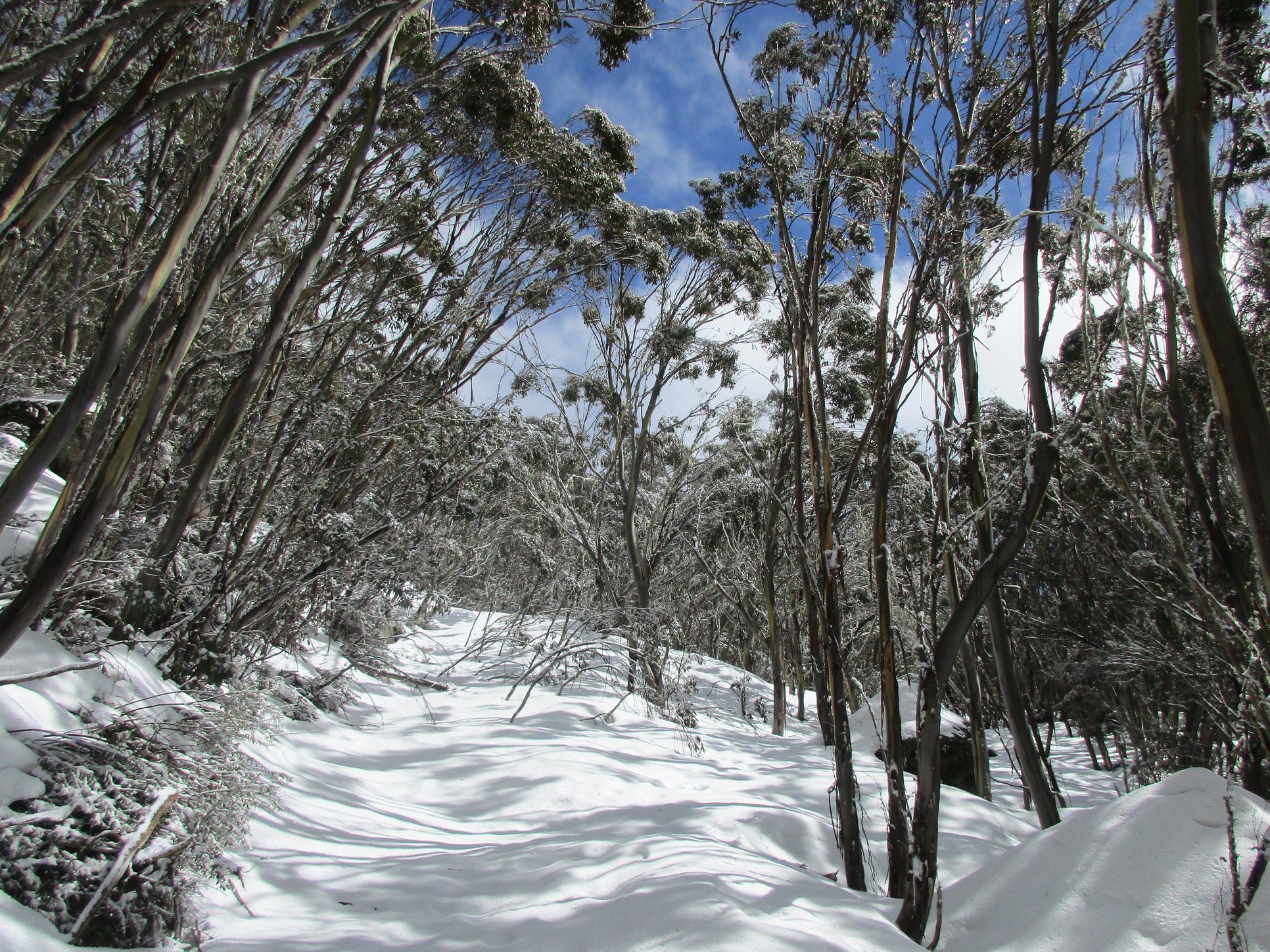 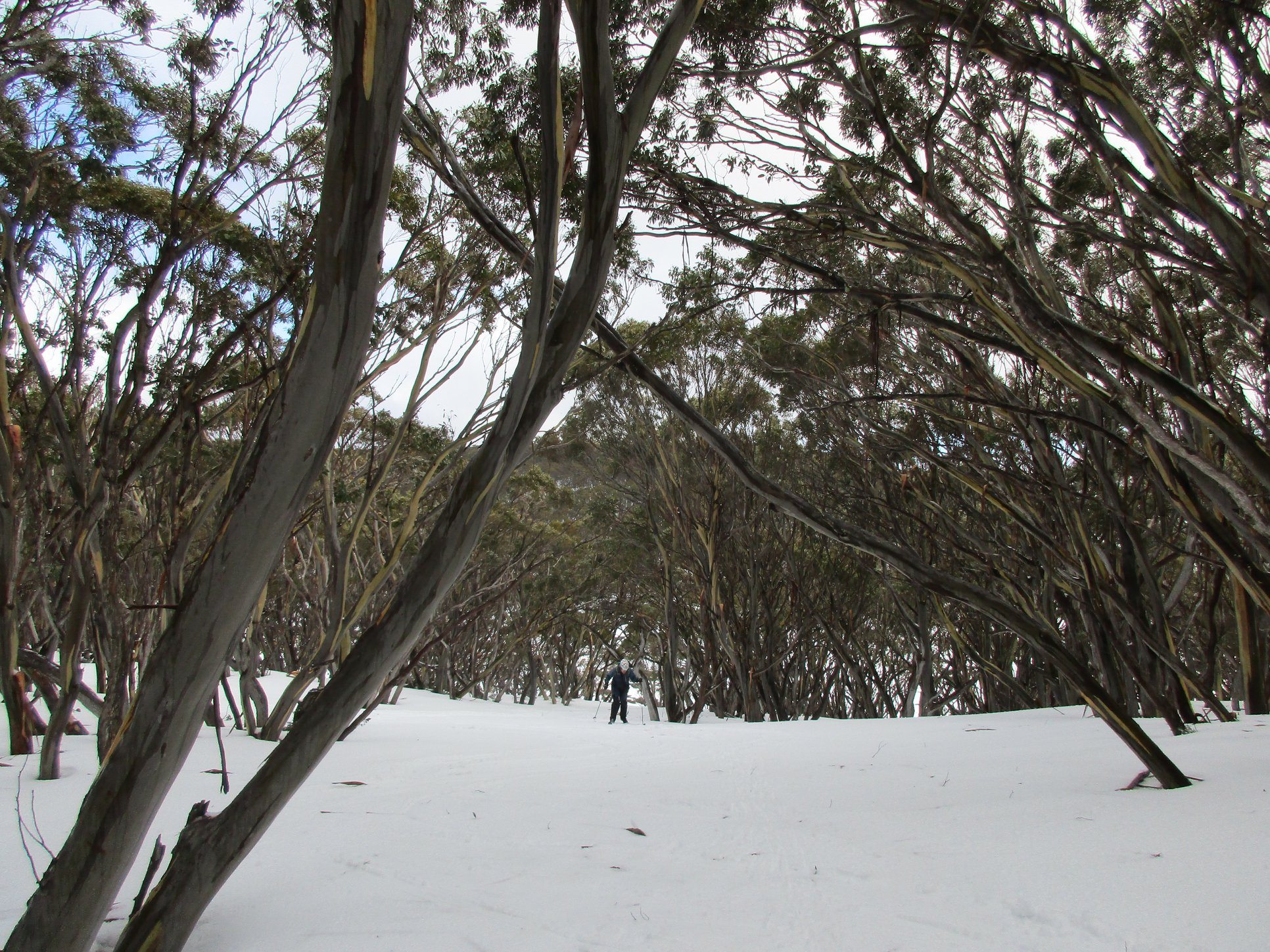 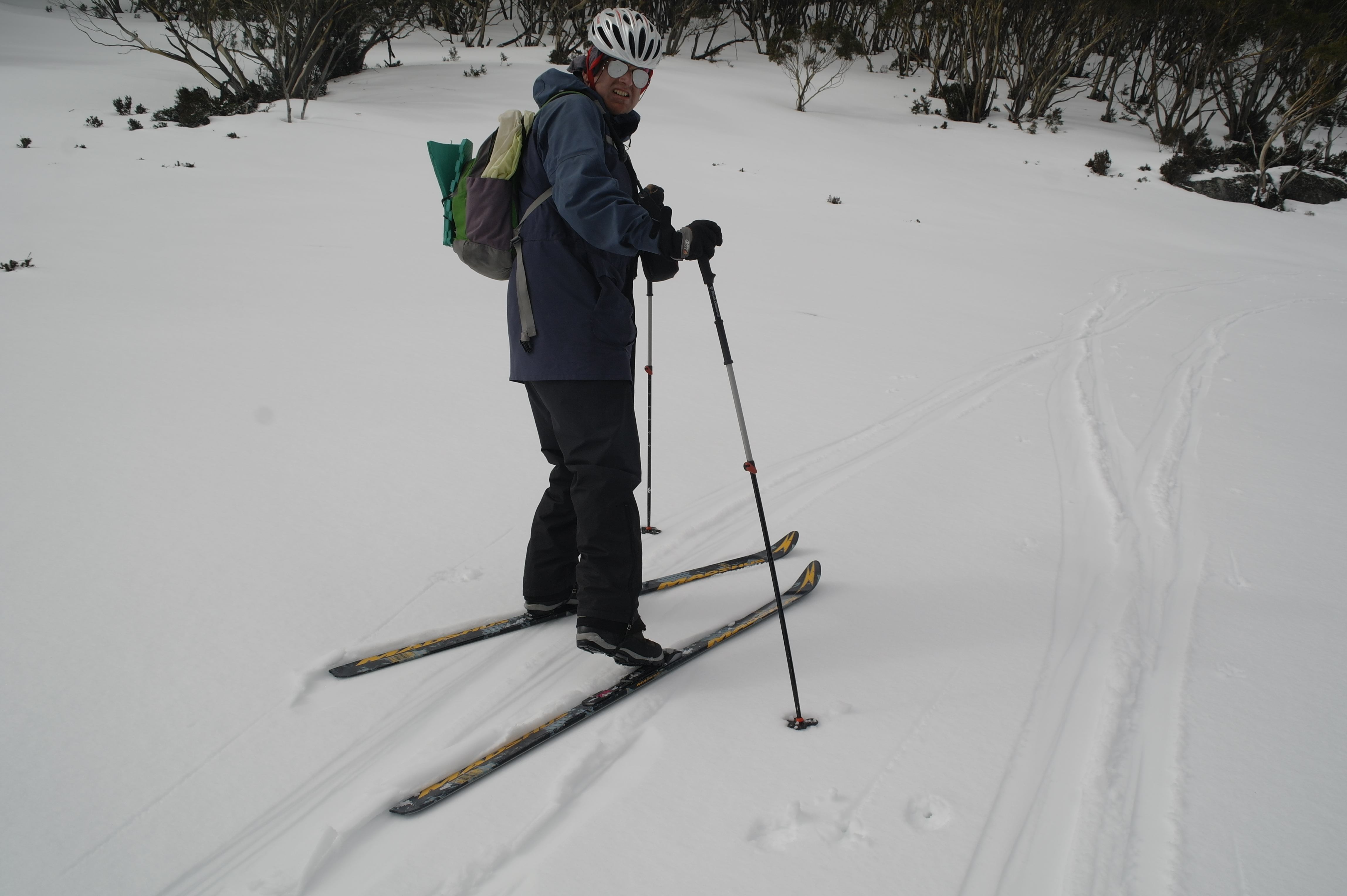 You must log in or register to reply here.
Remove ads with a
Ski Pass