I went to Mt. Stirling to ski in summer and it was marginal rock hopper stuff.
I arrived at about 0845 am at King Saddle hut. I got my stuff together and walked up to The Cricket Pitch where the snow cover was the 'best' of the day.

All in all it was Not really skiable . I scratched my skis( why did I leave the real OP shop rock hoppers in the car ? :-0. what was I thinking? ) on barely hidden rocks and it was not safe to descend, turn or snow plough stop at all.
@beefa skiing had a nasty spill on some rocks coming down from The GGS hut.
The snow was melting before my eyes but the section from The Cricket Pitch to King Spur Hut was the only real classic XC skiing I did. I walked the rest and took lunch at the GGS hut. @beefa skiing went around to the Bluff Spur hut and said the snow gauge was showing 20 cm.

It rained a lot too. It also became a right mess after the horse riding people came right up the middle of the track!
By that stage it was time to go home. I was wet , the weather was cold and miserable and ski turns were not to be had. I should have gone to Baw Baw instead.
It is time to go bushwalking and surfing. The planks are now waxed up and stowed away in the cellar for the summer. 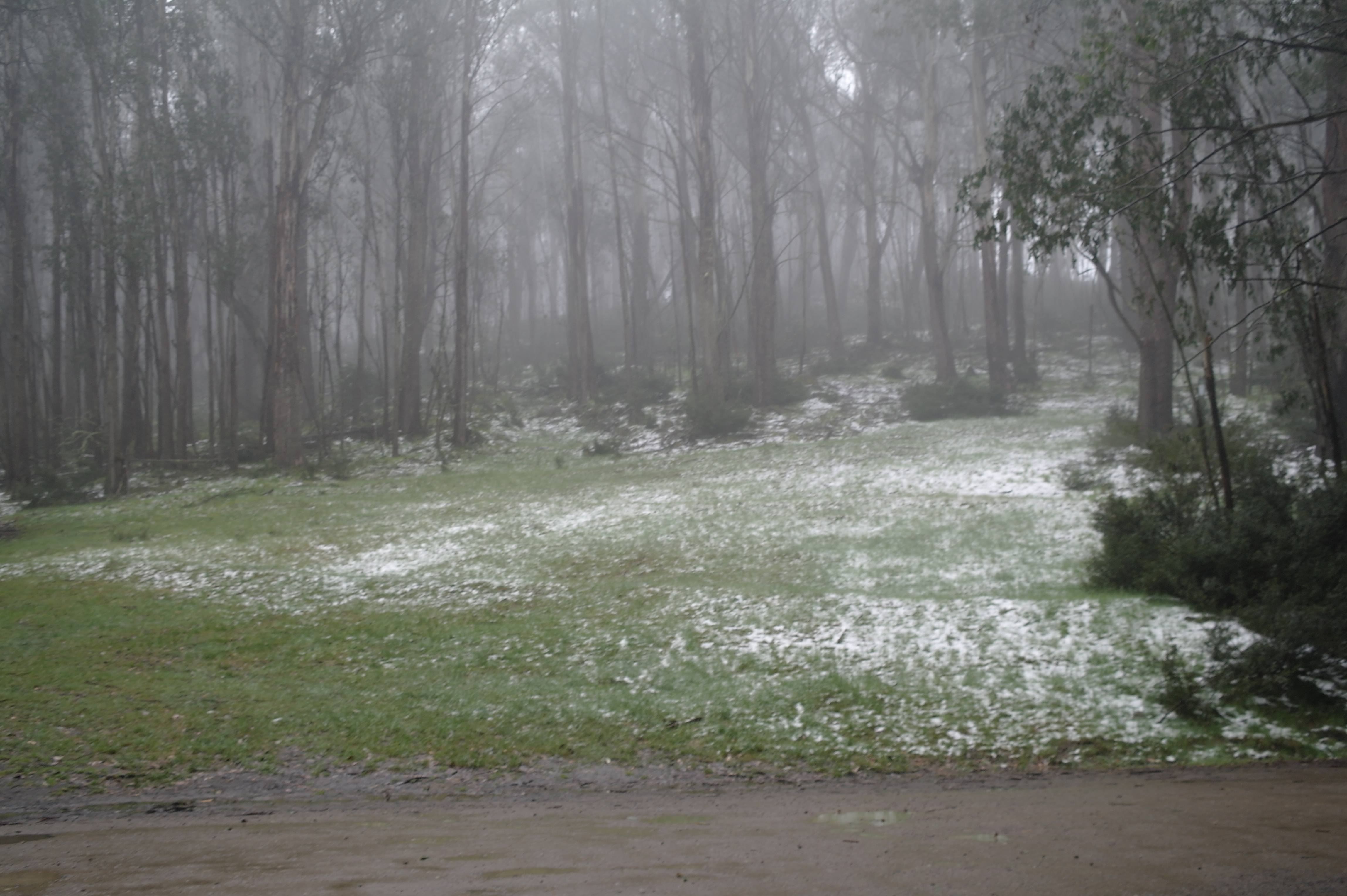 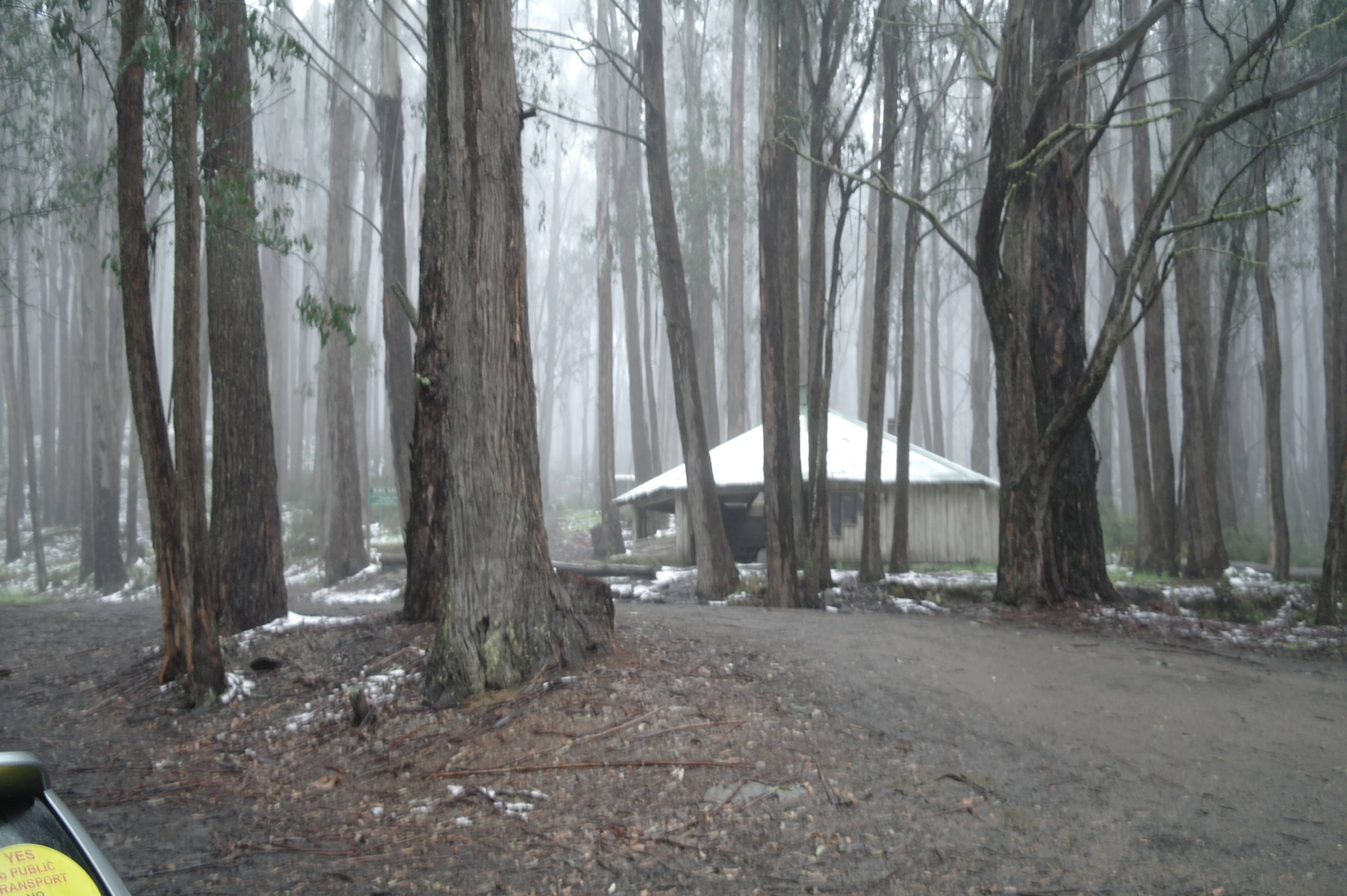 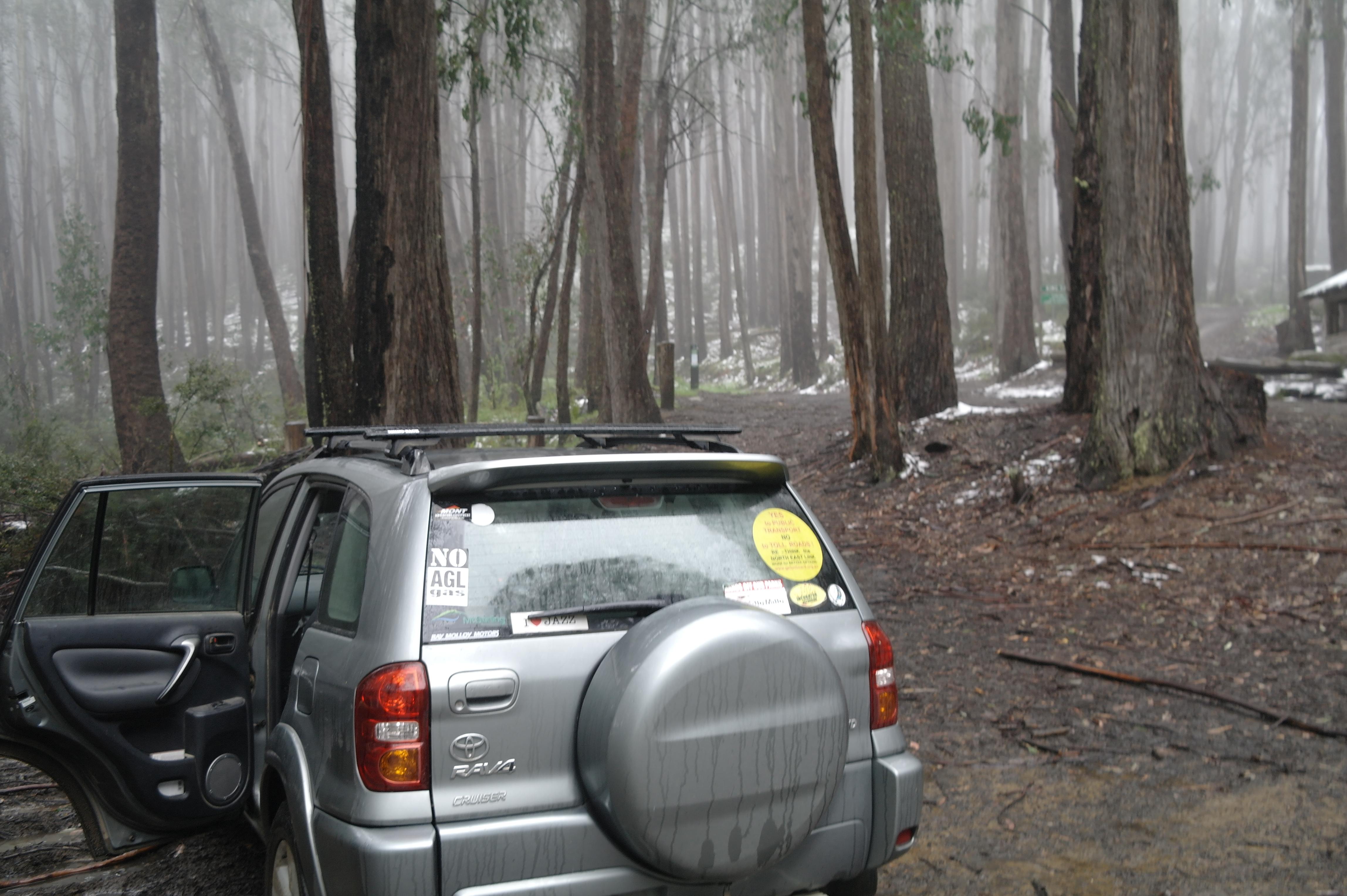 I rang @beefa skiing when I reached machinery shed. He was already at the GGS hut. He must have got out of bed at 3 am to get there that early.The snow cover was looking very marginal but it was a day in December after all. 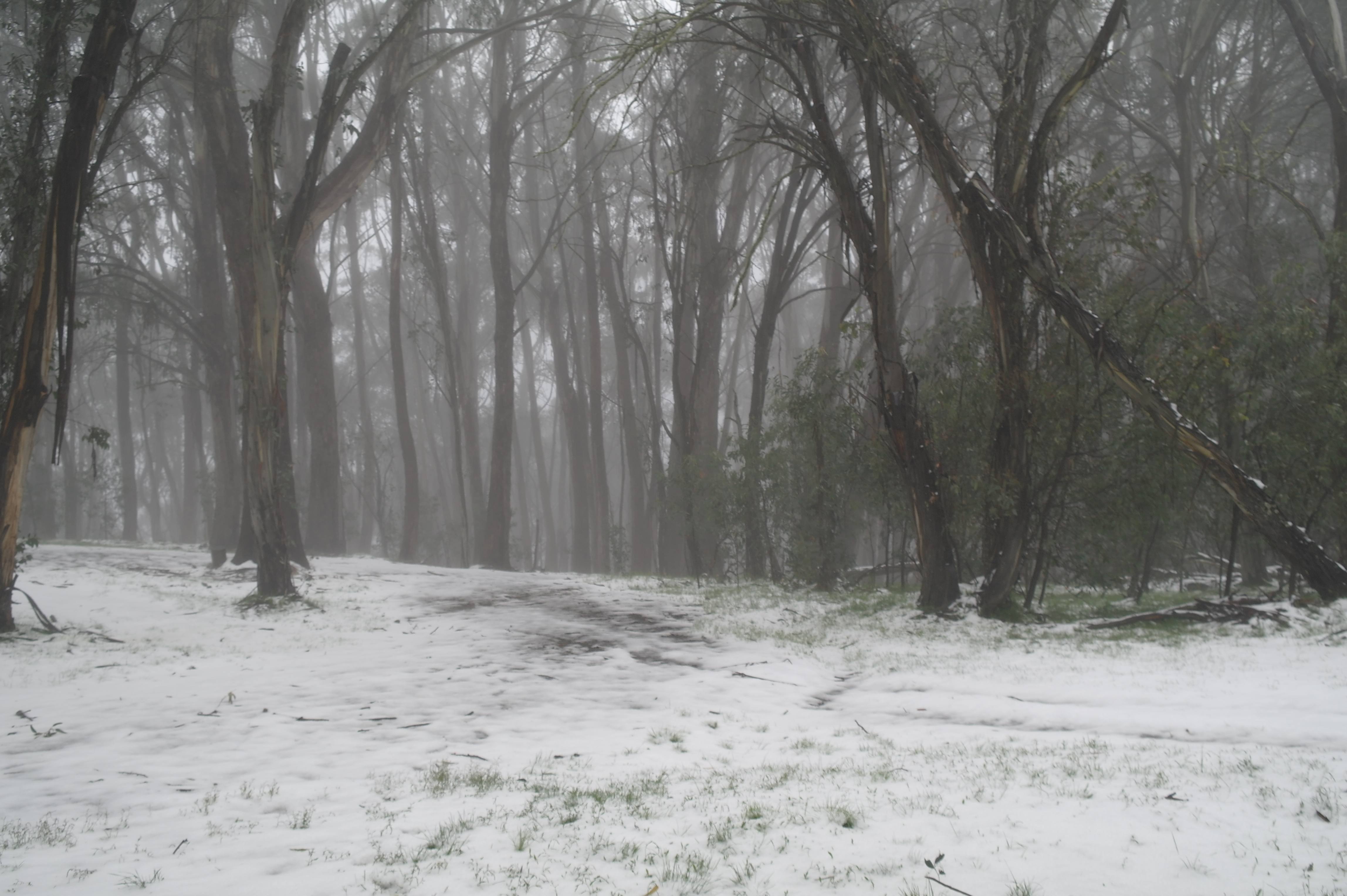 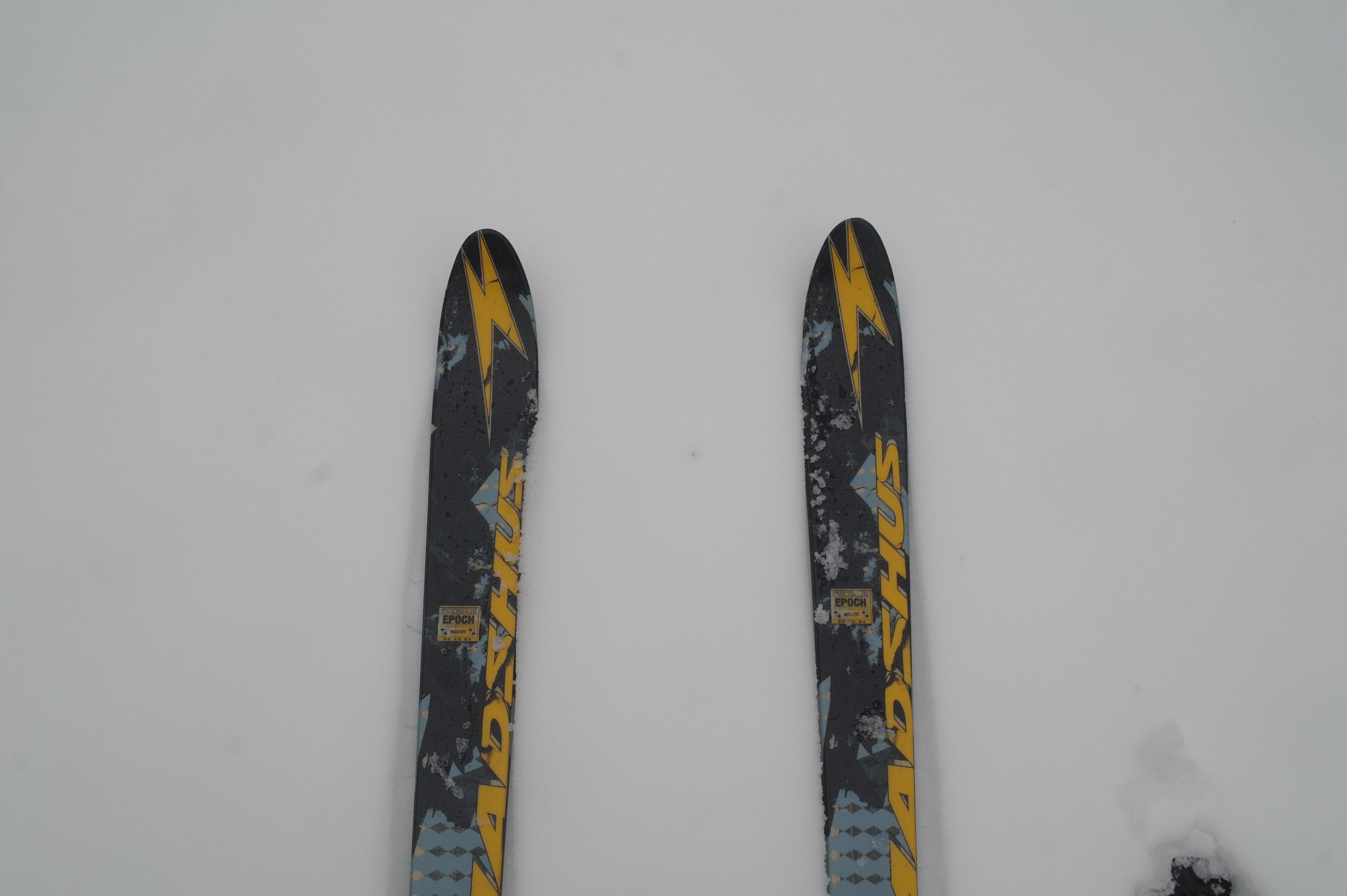 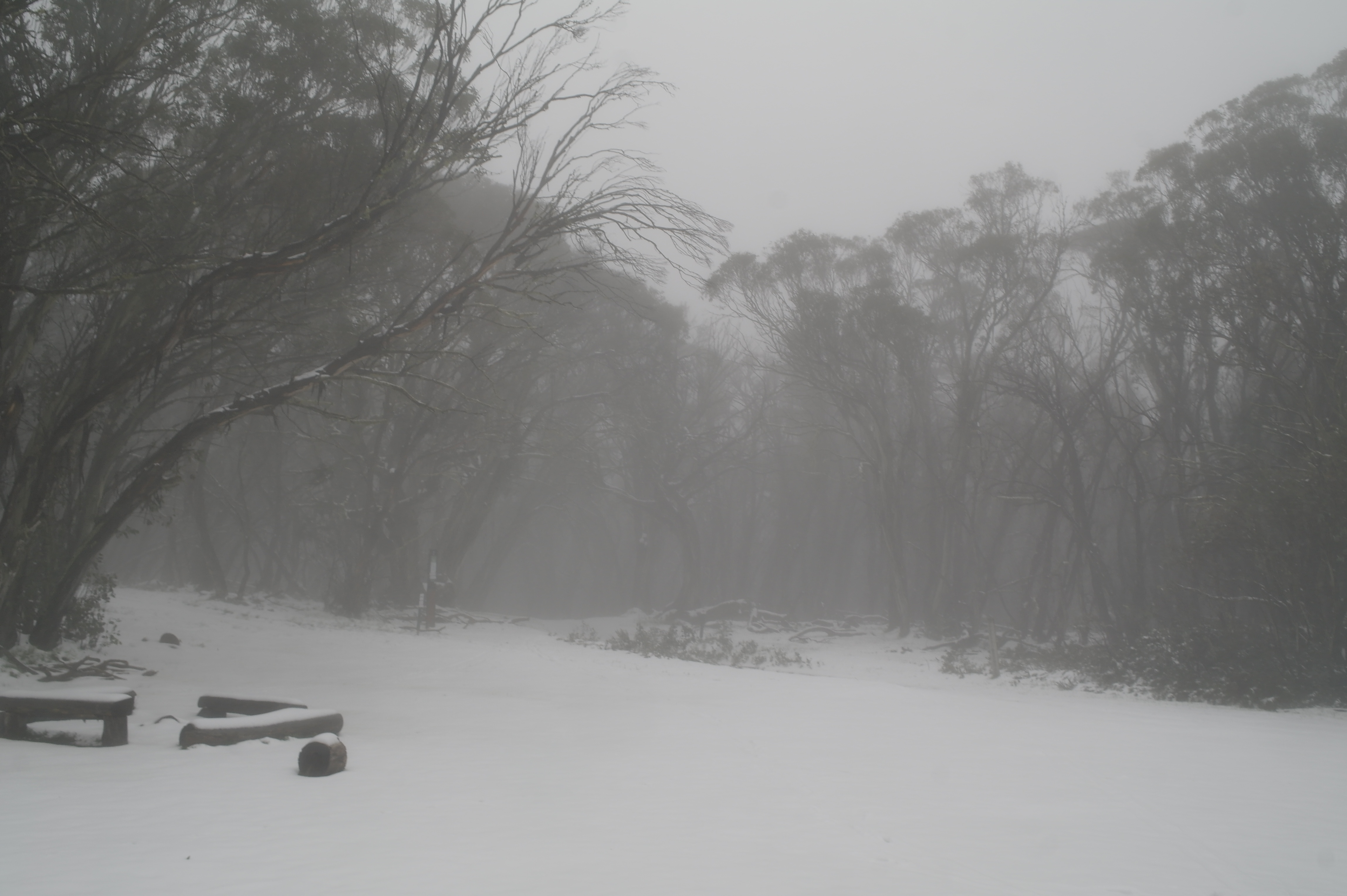 Heading up to King Spur hut and GGS Hut in the fog. After lunch at the GGS hut the weather became too wet , the snow became utter slush, the Horses had effed the rock hopper snow cover completely and a soaking wet mountain biker appeared wondering who had stolen our summer. It was not the right day nor were These the best conditions for Horse riding, Mountain biking or being able to safely glide and turn on skis without trashing the skis and injuring the skier.
At very least I had a day out in nature, in summer ! and I have decided to work on improving my surfing ability as of tomorrow . 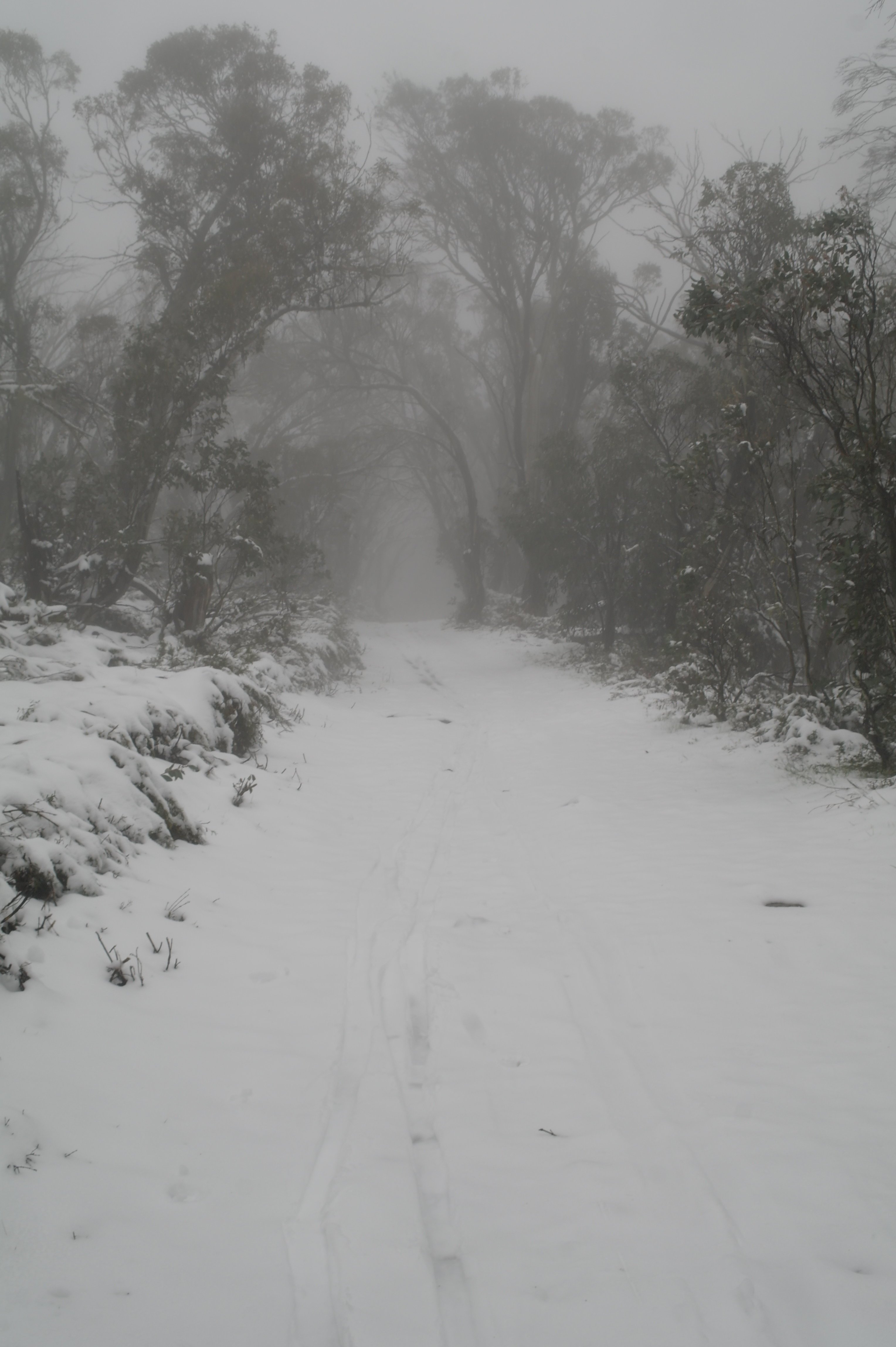 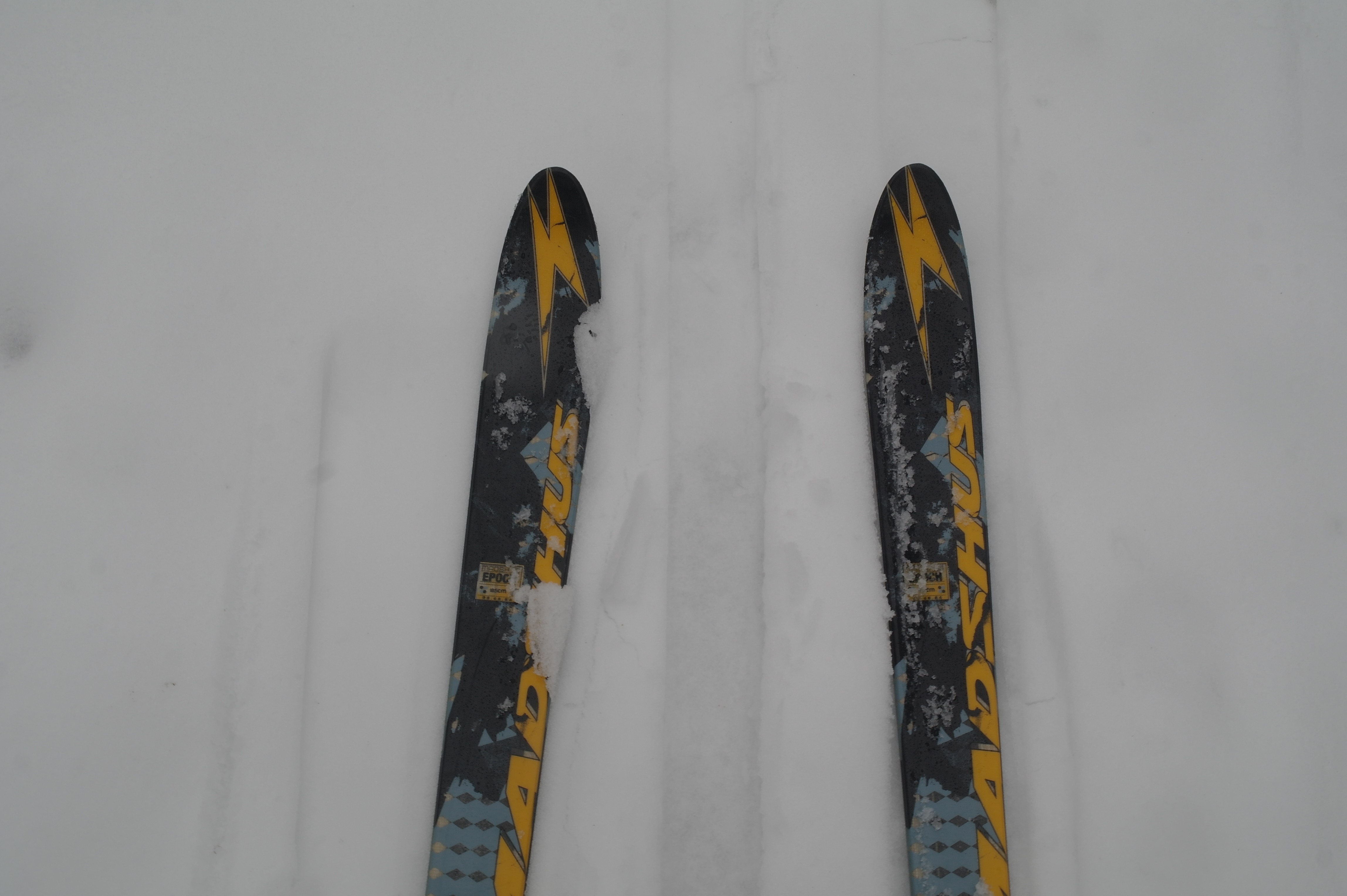 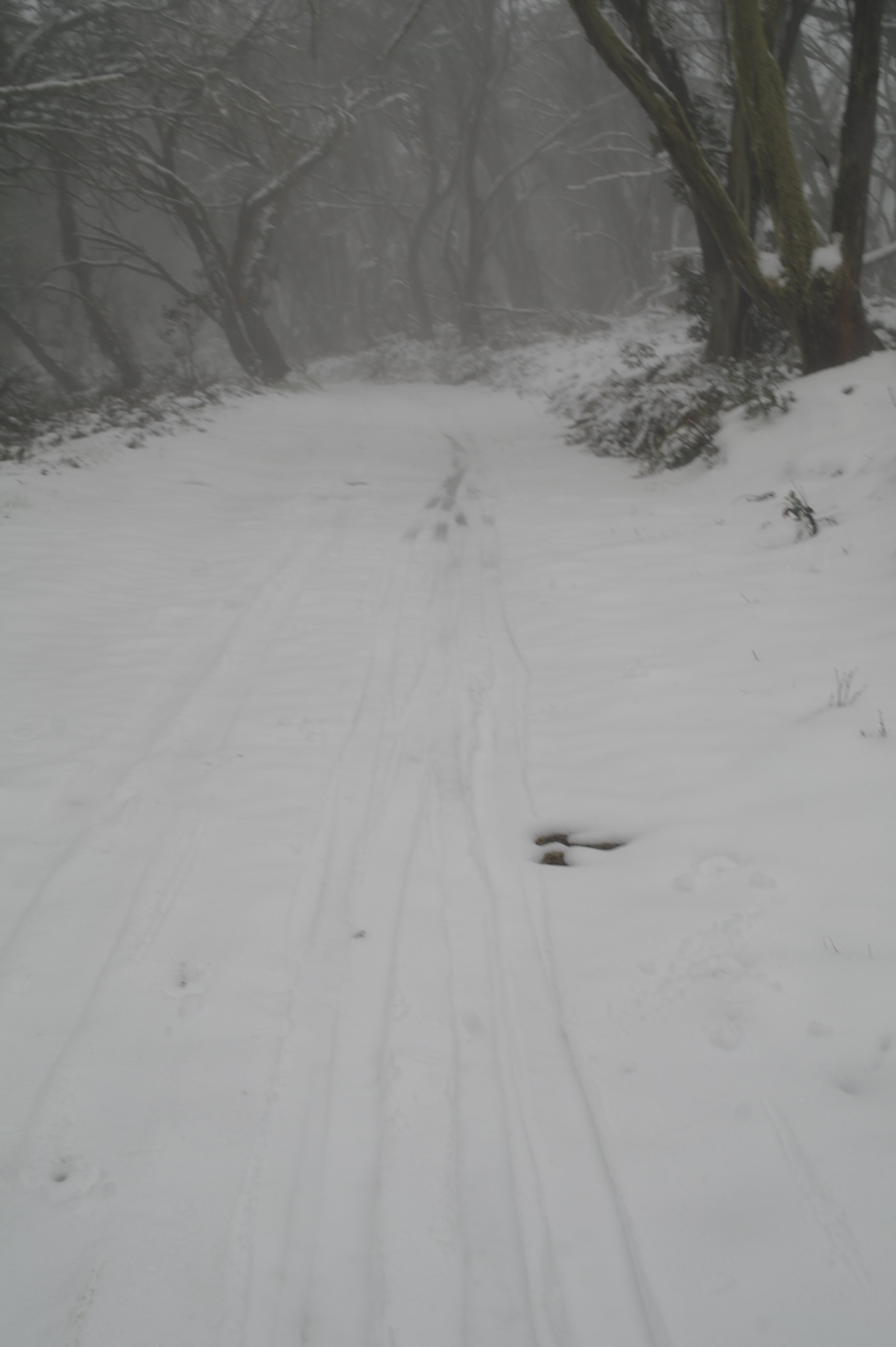 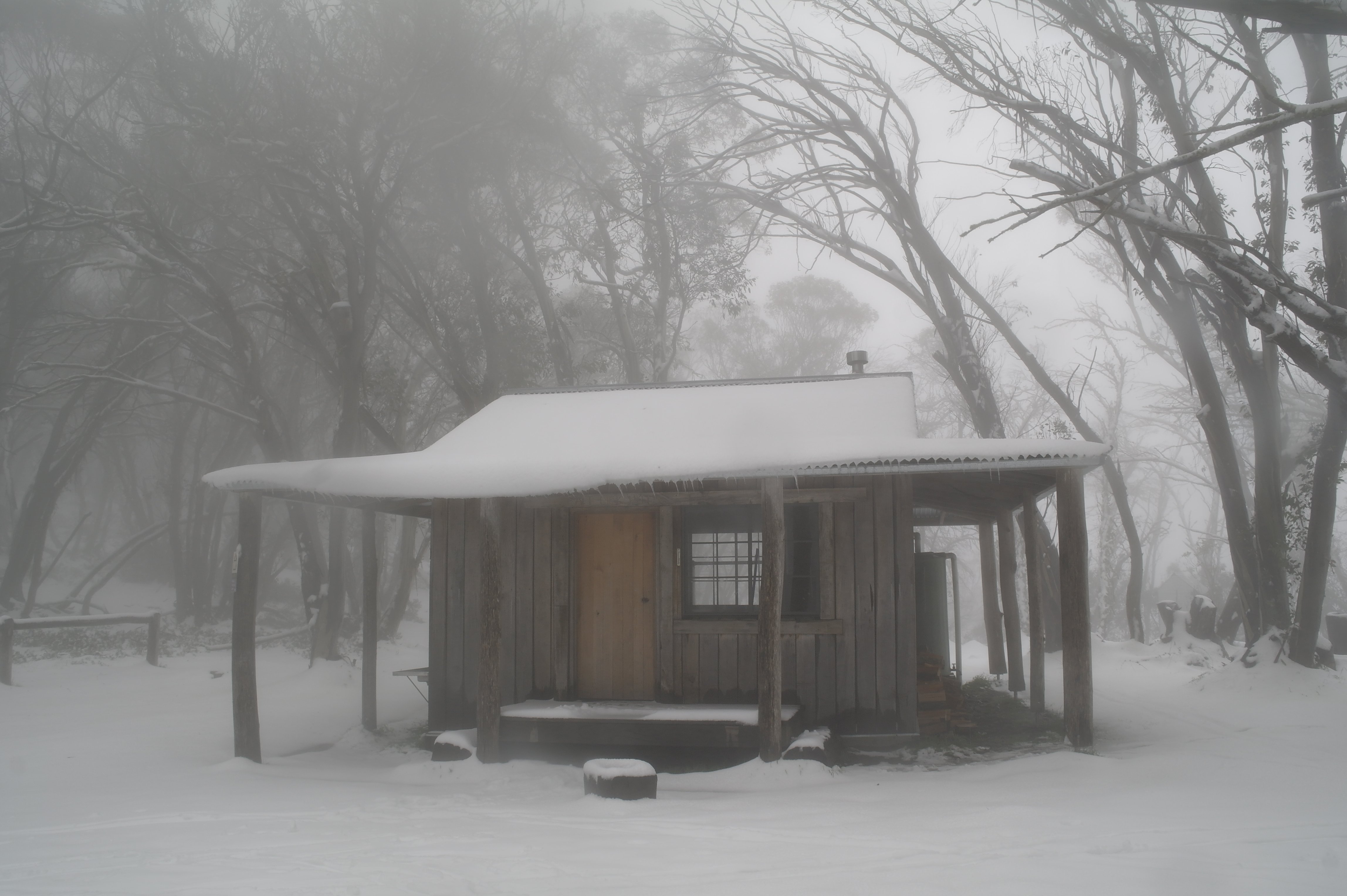 After taking these photos I was more interested in making my way back to the car , avoiding scratching my skis any further on rocks and getting some dry attire on and drinking hot tea from a thermos. The Weather station Ramble and Wombats drop trails had no footprints but they did not have enough cover to allow safe skiing so I carried my skis all the way back to the car. I think @beefa skiing did something similar after we met at King Spur hut and agreed the snow cover was insufficient to actually ski down hill at all . It was "Dangerously thin". Mt.Stirling needs 30-40 cms all over the hill to make it skiable. Lake Mtn and Baw Baw seem to require less snow to make real skiing feasible.

I did see some tree ferns lower down the hill festooned with snow in summer. You will have to imagine that .
I know Mt. Baw Baw will have snow again in 2020 but reading that @chriscross had a better day there on skis today gave me FOMO.
Anyway I did it. I had some plank action in summer.

Reactions: Bogong, SMSkier and Tanuki
B

I think the early start gave me the pick of the conditions up high before the horse riders came through. GGS to Bluff Spur Hut was skiable at 10am. By late morning the melt was intense. As @Mister Tee on XC Skis mentioned above, pointless trying to ski down King spur.
Reactions: Mister Tee on XC Skis
You must log in or register to reply here.
Remove ads with a
Ski Pass