This event has already started in Queensland.

The models are agreed that a trough, now off the Queensland coast, will depeen and develop Southwards. It is likely to spawn a low off the Northern NSW coast early next week. After that the models diverge. Access moves it further South and it hangs around for a while. GFS and EC move it further South and then it's followed by another.

Sydney’s forecast rainfall for the event is 30-75 mm, Newcastle 25-85 mm. It looks like mostly a coastal event, with just minor ”spillage” over the Divide. It will be mild to warm for this time of year. Snow is not on the menu.

Here’s this morning’s forecast rainfall to next Thursday July 30, from the BOM: 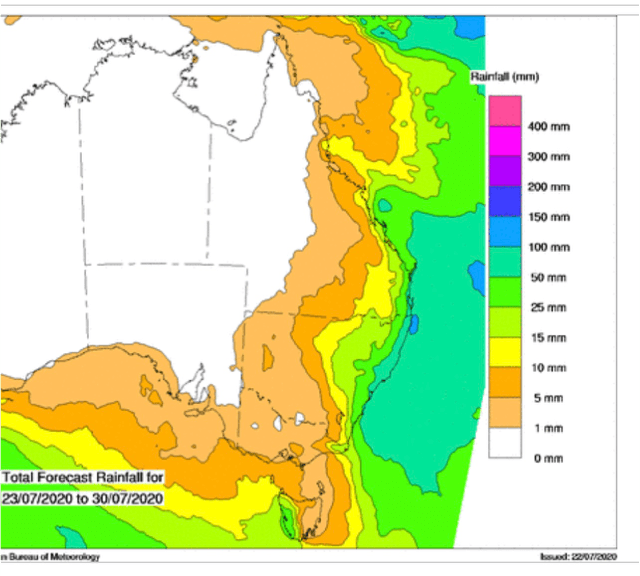 We could do with a decent drop in Canberra .....
Reactions: Belly

Some real tightening of the low on this morning's Access run. Not supported by EC or GFS though 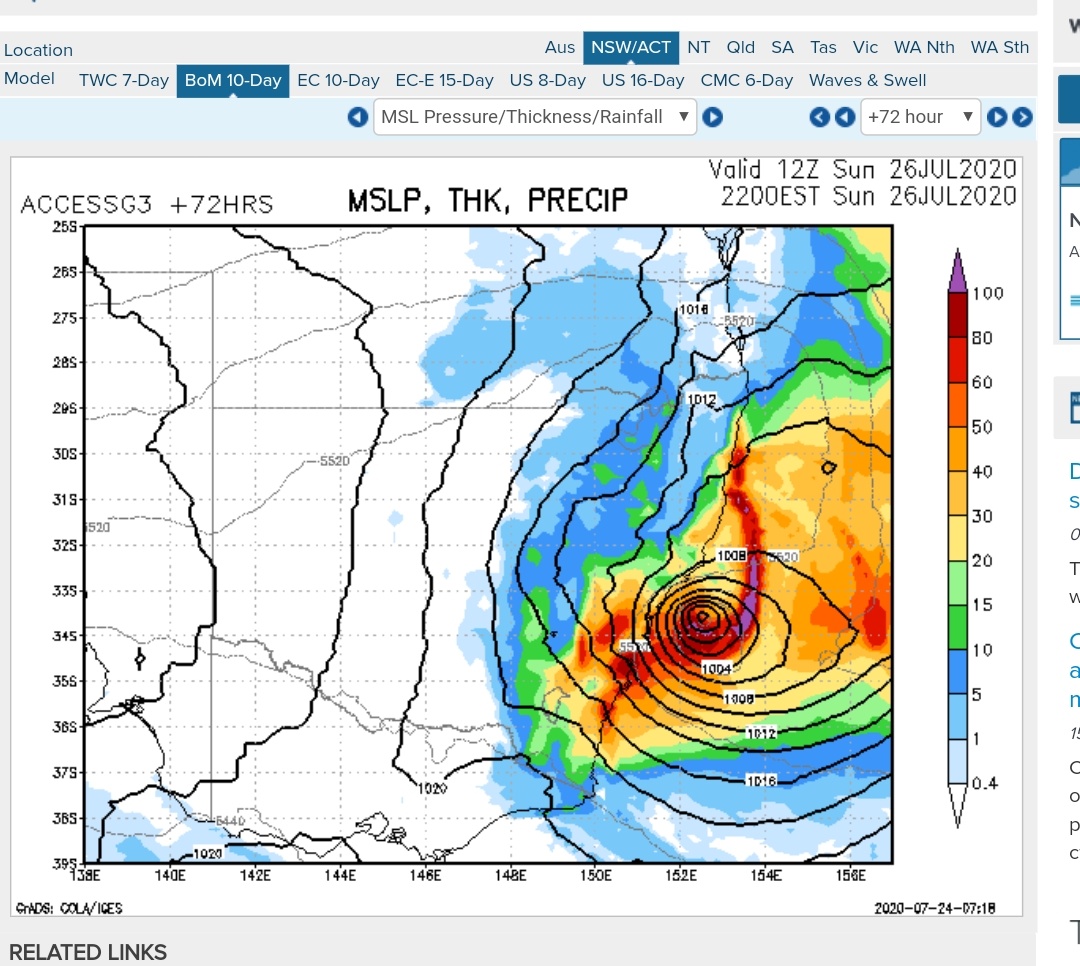 Reminds me of the last low and its affects on coastal erosion.
Reactions: nfip and AshestoAshes
A

Gee whiz about to end up on our first above average July since 2016, been a long time coming. Always thinking of those not so fortunate, pray for those to see some timely rain. The last 3 July's have seen a total of 28mms.
M

Narrabeen Lake has been opened up as a precaution.

Rockin the lock in

A little kiss for the catchments, too.
H

BOM has upped the ante for Sydney for Sunday 40-60 mm's now forecast.
I haven't checked other parts of the coast yet.
H

Seems to be a Metro/Illawarra bullseye for Sunday. Rain tapers off further north and south of those regions.

Will be over in Oberon Sat/Sun/Monday.

SnowBound said:
Will be over in Oberon Sat/Sun/Monday.
Click to expand...

Southerly is ok for the our part of the coast.
Of course, south easterly is better.

Sunday night looks the 'meat and potatoes' for the Sydney Coast IMO.
Looking solid ahead of the Southerly shift.

It’s foggy here this morning, which is unusual. The fog rolled in during the last half hour or so. Webcams show thick fog on the Harbour.

Fog in Sydney normally means a sunny day on the way, but the satellite shows mid level cloud moving in from the North, with showers forecast for this afternoon.

lock it in Eddie.
and shorten the sails.....

Steve777 said:
It’s foggy here this morning, which is unusual. The fog rolled in during the last half hour or so. Webcams show thick fog on the Harbour.

Fog in Sydney normally means a sunny day on the way, but the satellite shows mid level cloud moving in from the North, with showers forecast for this afternoon.

The forecast also says chance of a thunderstorm late this morning, i.e. in 3-4 hours’ time. We’ll see.
Click to expand...

I am getting excited about this low moving down from the north ,I hope the Hunter where I am inland from Newcastle gets a heavy drop.I will be watching this one.love these events.
Reactions: nfip and AshestoAshes

Getting very dark here in Castle Hill. Some big, dark cu's about. Radar starting to fill in so the onset of rain is near.
There was enough sun around this morning to get the max's near enough to forecast (generally a degree or so below).
Fog didn't clear till after 11 am which kept watching the boy at soccer this morning feeling decidedly cold.
Reactions: POW Hungry

Feels like the calm before the storm here.
H

Beautiful day up here in the BMs. Can’t complain... 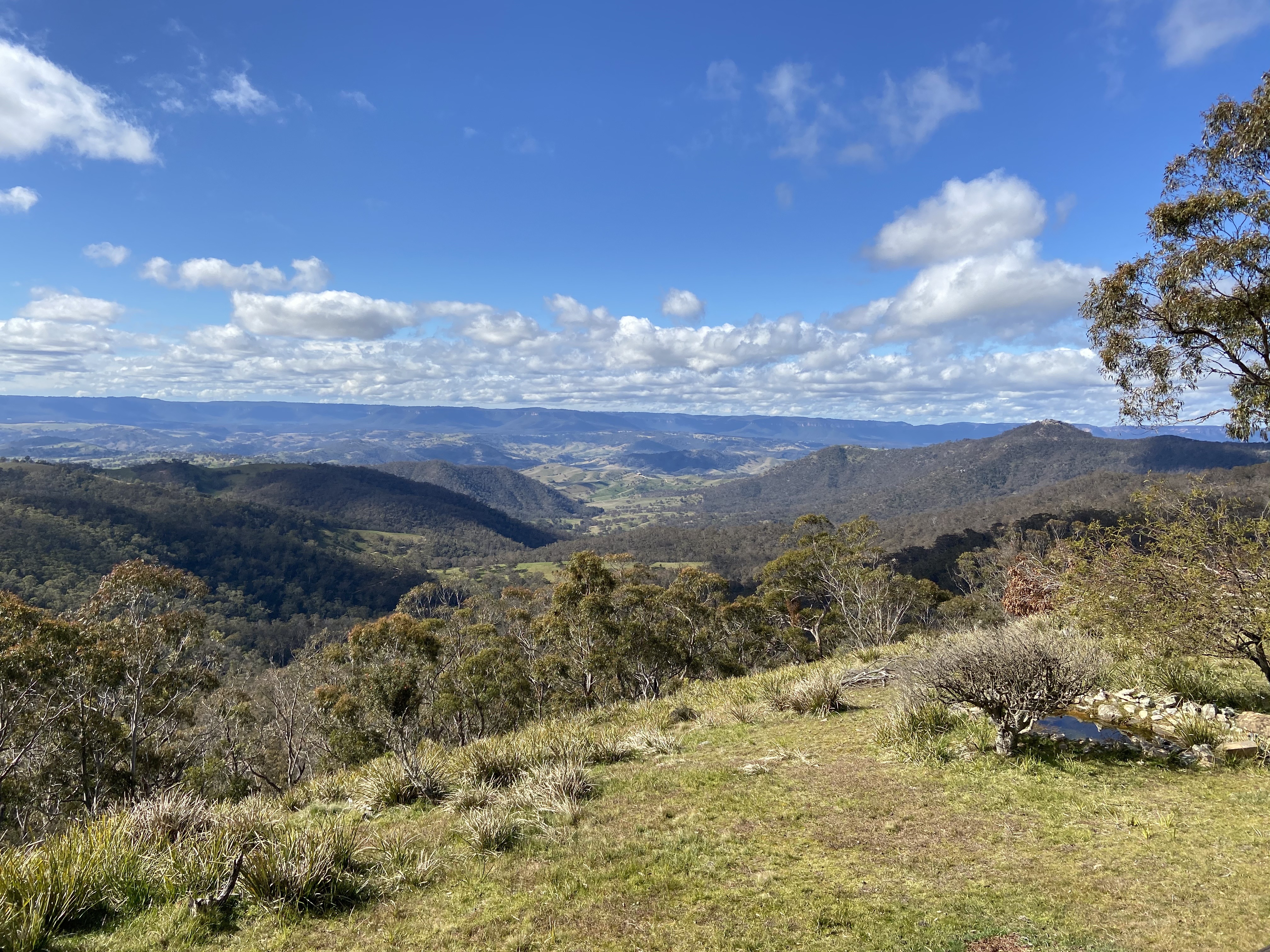 Wedding Cake Island near Coogee at about 3:00 PM this afternoon: 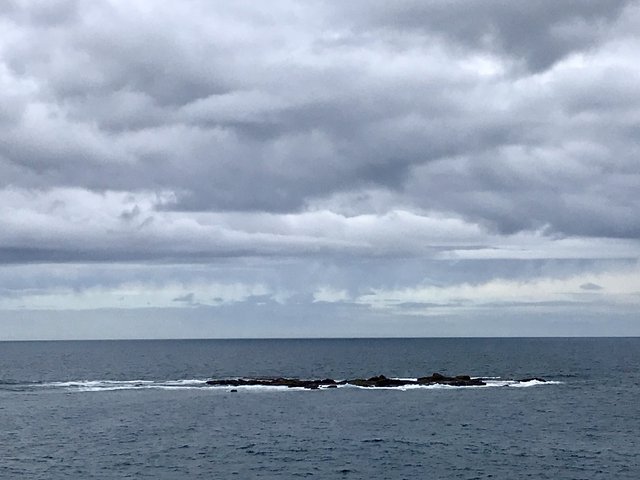 The ocean is relatively calm, but that will change in the next few days. Light showers passed overhead shortly after this was taken.
Reactions: Seabreezes, Adaminaby Angler, whether and 3 others
H

Really need that proposed Central West radar. Near Wellington wasn't it?
There's been some reasonable falls through the Central West Slopes and Plains today.

first spots down here Ulladulla last half hour or so....
A

1.8mms thus far, EC throwing the hammer down a widespread 250+mm focusing on Kangaroo Valley. BOM is keeping it steady though, we'll see though I think 150+mm in those said regions are a fair shout at this point.

Those sand dune houses at Wamberal may be in for another whack
Reactions: AshestoAshes

MisterMxyzptlk said:
Those sand dune houses at Wamberal may be in for another whack
Click to expand...

But it's the councils fault...!
Reactions: POW Hungry, AshestoAshes, Fozzie Bear and 1 other person

There was widespread rain / showers across NSW to 9:00 this morning. Heaviest falls were on the far North Coast with many 50mm+. The Central West had a number of falls 25 mm+, with 36 mm at Cowra.

Just modest falls in Sydney so far, around 5 mm give or take.

Here, it’s solid overcast, light showers and 14°. There’s a big blob of rain moving in from the North so rain totals should start to pick up soon.
Reactions: Adaminaby Angler
M 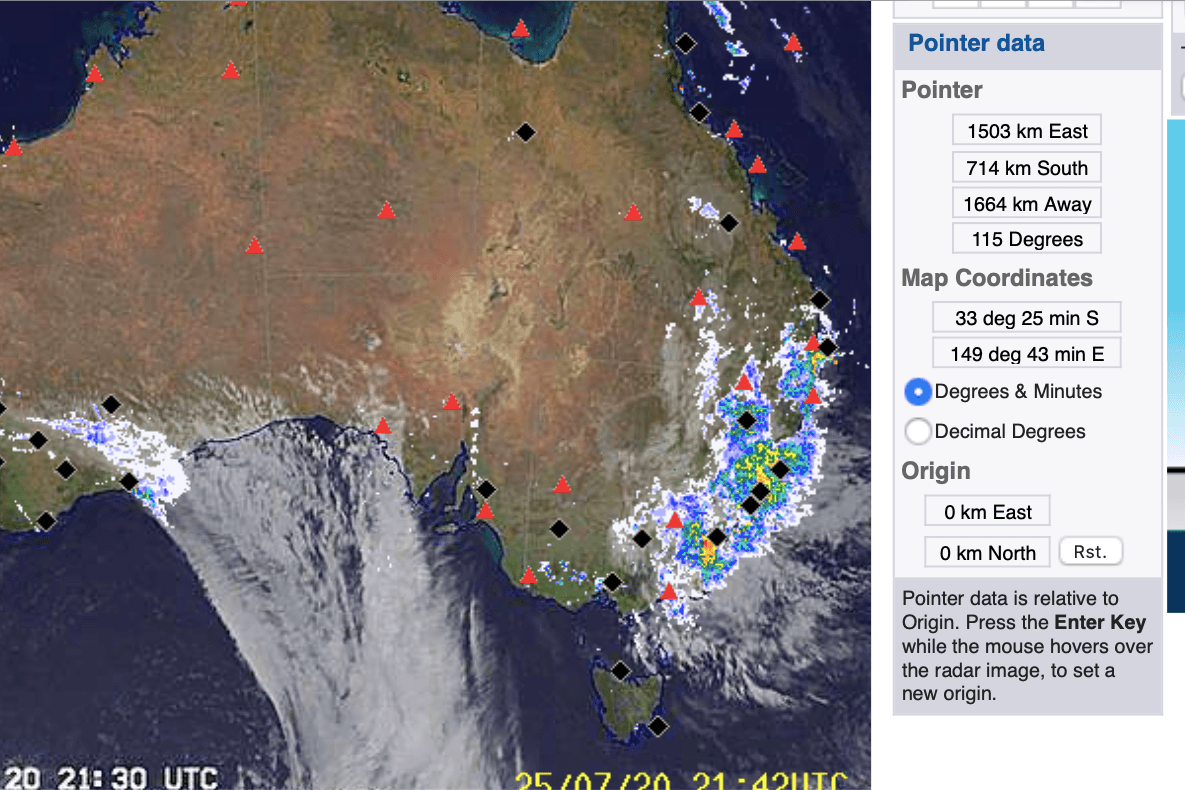 Not often you see rain extending from Wison's Prom to Gympie
Reactions: Adaminaby Angler and Untele-whippet

nfip said:
first spots down here Ulladulla last half hour or so....
Click to expand...

50mm at Moruya airport up until 9am and another 5 or so since. Good drop
Reactions: nfip

Winter mix at Charlotte Pass with not enough winter. Needs to be a couple of degrees cooler.
Reactions: dawooduck, POW Hungry, Jacko4650 and 1 other person
A

Flood watch out, SWW doesn't really reflect this though it only gives a look in for Damaging winds and Surf for the coastal fringe. 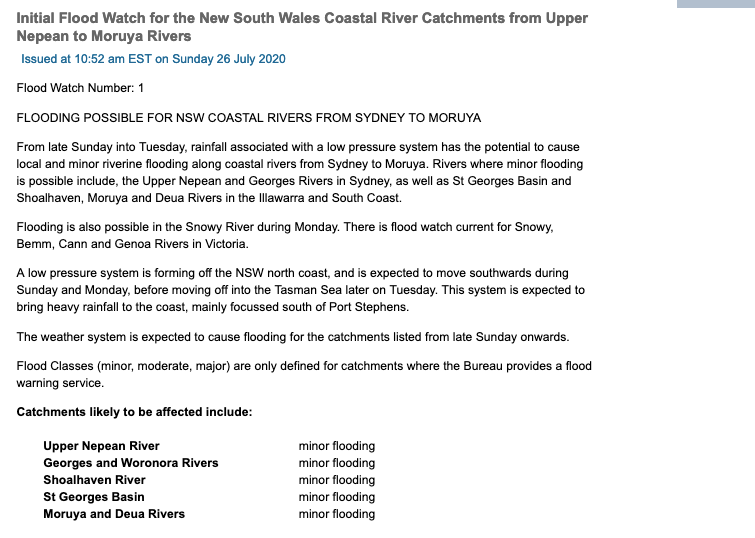 Belly said:
50mm at Moruya airport up until 9am and another 5 or so since. Good drop
Click to expand...

yeah we've had about the same.
getting royally hosed at times.
I gotta drive up to Cbr in it this arvo, will be very steady as she goes .
Reactions: Belly and Kletterer

Fozzie Bear said:
Winter mix at Charlotte Pass with not enough winter. Needs to be a couple of degrees cooler.
Click to expand...

The low is trying to bust in and rain in NE Vic .
Falls wet + in the positives = great.

Surely we need some sort of SWW for heavy rain. Check out those rainfall rates at Williamtown 30mms in 30 mins and counting.
Reactions: Homer

60mm here in Glenbrook thus far. Judging by the radar and the positioning of the low we should easily surpass 100mm to midnight.
Reactions: stormy3 and Homer

davidg said:
60mm here in Glenbrook thus far. Judging by the radar and the positioning of the low we should easily surpass 100mm to midnight.
Click to expand...

The good news is that a shite load is falling in the catchments. Well, coastal catchments anyway.
Reactions: davidg 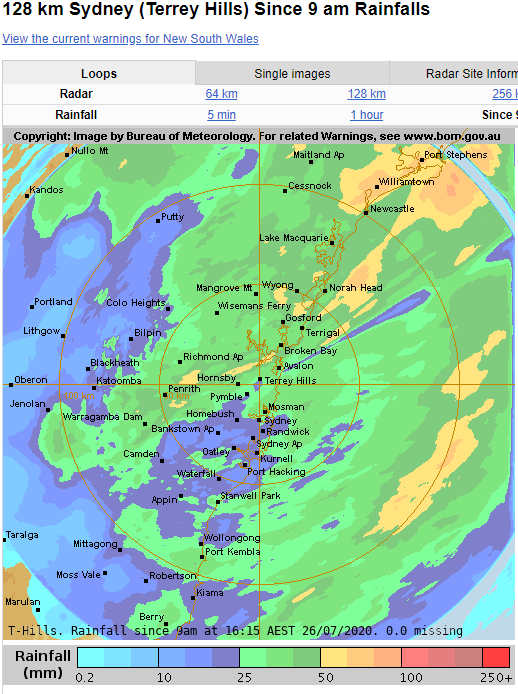 Reactions: Steve777, stormy3, Kletterer and 1 other person
You must log in or register to reply here.
Remove ads with a
Ski Pass