You are using an out of date browser. It may not display this or other websites correctly.
You should upgrade or use an alternative browser.
W

Ok folks I am calling it done and dusted for the first month of Spring. No where near average let alone above average rainfall for the month and nothing on the horizon to get excited about. There better be a big change for Oct/Nov or the agencies will have failed big time once again.
Reactions: skifree

Not a nice start to spring, and certainly not looking like anything much for the remainder of September.
Reactions: Seabreezes and skifree

Models starting to show a bit more colour in the Indian Ocean towards the end of September, at least more action than there has been of late. Our optimistic mate ECMWF has some nice systems brewing, but unfortunately its reputation has taken a hit. Fingers crossed for the first couple of weeks of October.
Reactions: skifree

Some rainfall updates for Aug & Sep.

The figures for August and September monthly rainfall figures will be estimates as I was away during part of that time and hence only had a total reading for the time I was away.

So, what I have done is to use the rainfall data from the observation tables for Adelaide Airport for the days I was away & add up the total for those days. Then I calculated a ratio of the total for each of the days rain fell and multiplied it by the total rainfall I measured at home to get an estimated daily rainfall at home. This will only affect the monthly rainfall for Aug & Sep, but not the total for the year. Hope that makes sense.

Thus for August, I have an estimated total of 42.5mm vs Adelaide Airport's total of 39.6mm (under average).

Total estimated rainfall for home was 177.0mm vs the Airport's winter total of 159.4mm (just under the winter average).
Reactions: Parklife and skifree
F

Bit of a slow moving cut off especially east will favour east of ranges tuesday onwards? Sorry guys ain’t been here for a while actually got a new iPad lost all me stored stuff. I’m back better or for worse. Probably best eastern border and south east or into Vic again
Reactions: Homer

Stormy feeling about the place, thunder now and cumlus over the raners. 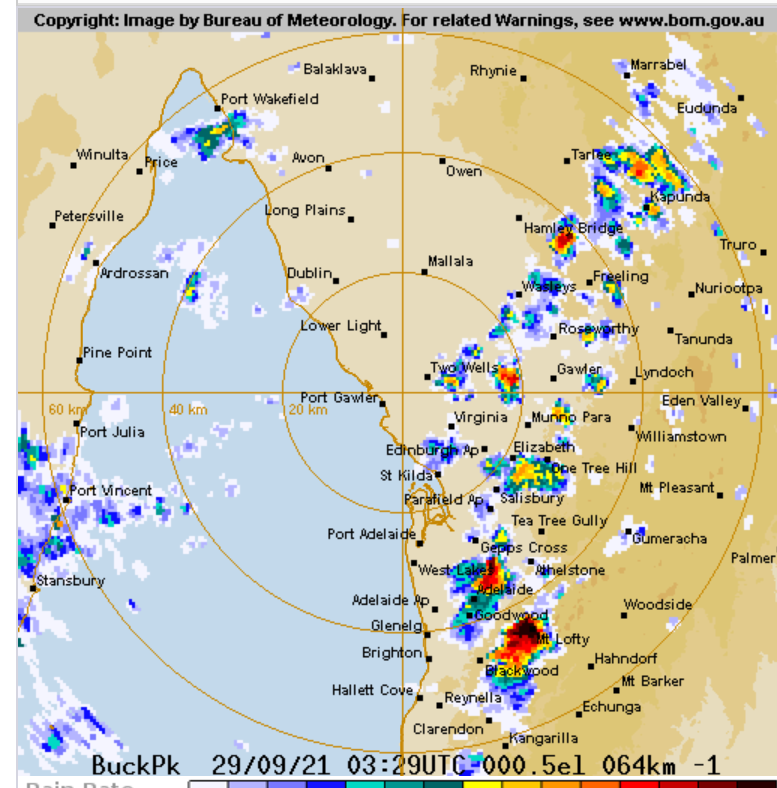 Reactions: skifree and Craig B

Crafers got smoked, an images?

Craig B said:
Crafers got smoked, an images?
Click to expand...

WZ has a link to this:

Reactions: Parklife, Craig B and skifree
Remove ads with a
Ski Pass

Only had a short shower or two of heavy drops at Kilburn during the afternoon.

My partner told me that there was a reasonable amount of thunder heard at home (not overhead) although not much rain.

Some nice convection visible to my SE from work. Sky looked black to the east for most of the afternoon with the storms & hail over the Mt Lofty Ranges. The hail may have affected some of the fruit tree crops in those areas such as apples & cherries although I'm not sure at what stage the trees are at.

Mt Lofty's rapid fire 56.8mm over 2 hours was quite impressive, something quite common in NT during the Wet Season.

There was orange colouring on the 128k radar around the Mannum area just as I left work at 5pm with a small elongated pale blue "donut" about where my property is. I'm not sure whether this was a real lack of rain or just the limitations of resolution of the radar image.

I did see Pallamanna recorded ~21mm and Mypolonga NRM station recorded 42.8mm since 9am, so if my property recorded anything ~20mm+, I will be very happy. I'll find out on Saturday what the total for the last fortnight has been.

Not sure what the heavy rain has had on the grain crops in the Murray Mallee, but some of them looked like they could do with some more precipitation when I was in the Mannum area recently. Crops north of Gawler were around 30cm high in places, so hopefully not too much damage there.

Anyway, all in all, a nice tropical injection of moisture to parts of the Central/Eastern regions of the state.

The rain forecast in northern Vic & Riverina districts should hopefully flush the Murray a bit.

Enough of my ramblings for now.
Reactions: Homer, Parklife and skifree
F 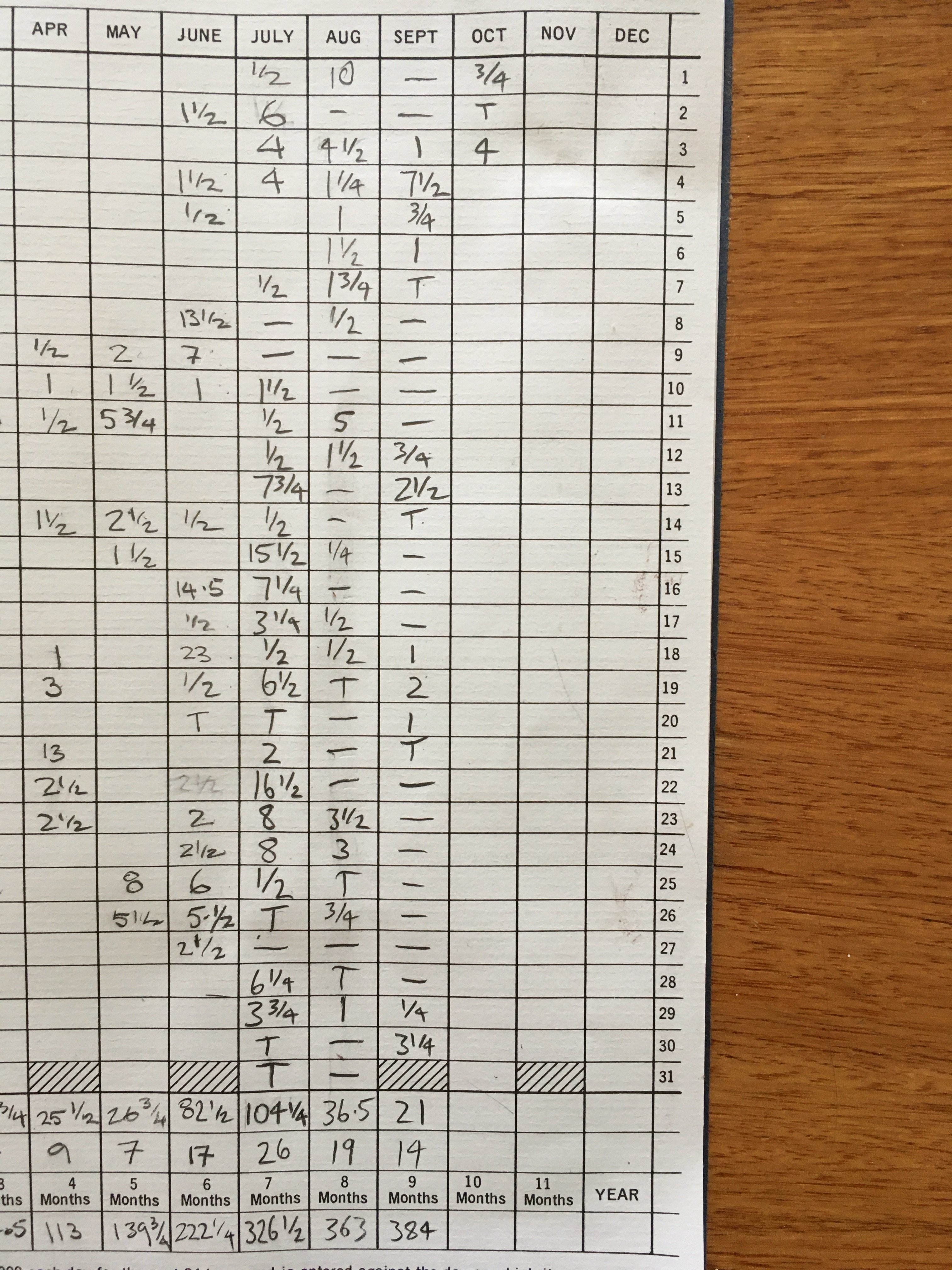 Nothing major in the next week or so apart from some drips & drabs from showery stuff, no NW cloudbands that I can see anyway. They seem to be favouring the eastern states atm.
Reactions: skifree
F

Yep looks like Saturday top up vanished and mid week may not materialise just a top up of 5 plus mm be great after last weeks 18 to 25 soil still damp
Reactions: skifree
F

Dare to dream a nick of time top up this week 10mm maybe or did I just give it the kiss of death. Mid north of SA will do well this week
Last edited: Oct 10, 2021
Reactions: skifree

Yes finally a Low that is not being repulsed by SA, Thursday the pick rain wise, models not exactly agreeing on totals, but all at least agreeing on 5mm and as much as 35mm. 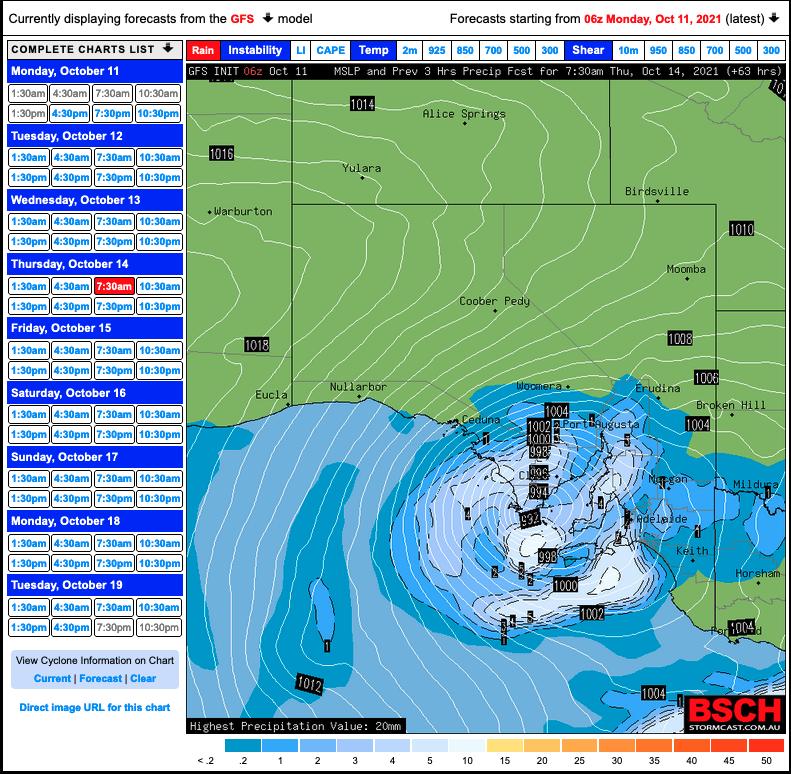 EC and GFS backing off and BoM more optimistic.

As per normal, promise a sniff then slowly back away so tomoroz is just a sunny repeat of the previous.

Well, it sure is a nice looking system 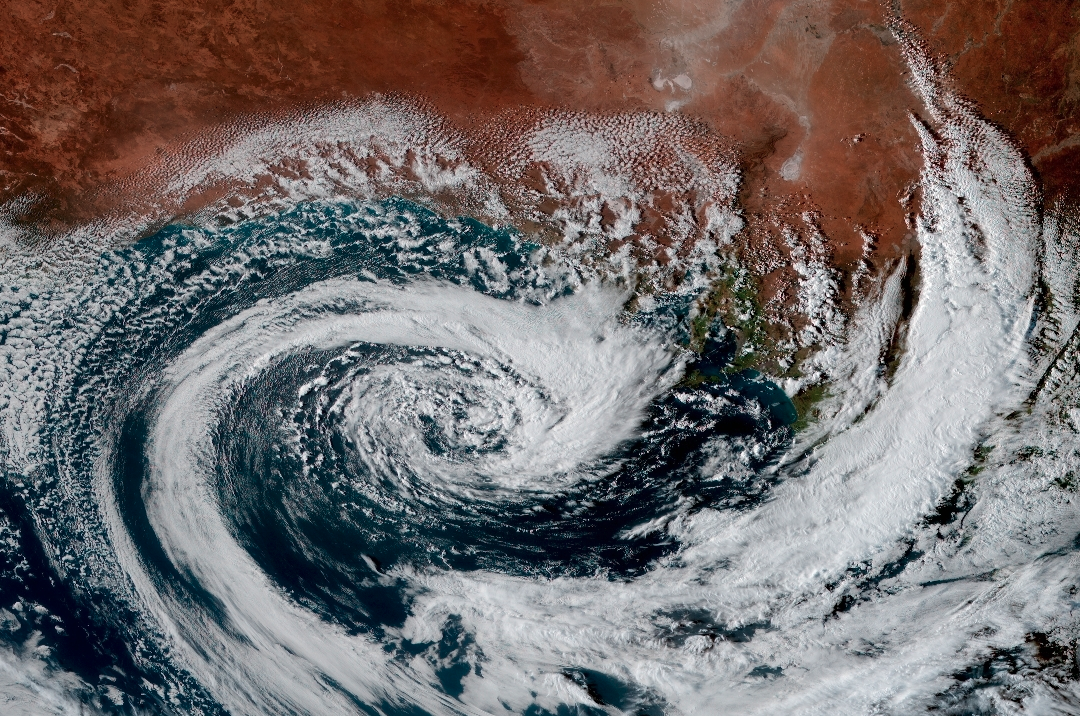 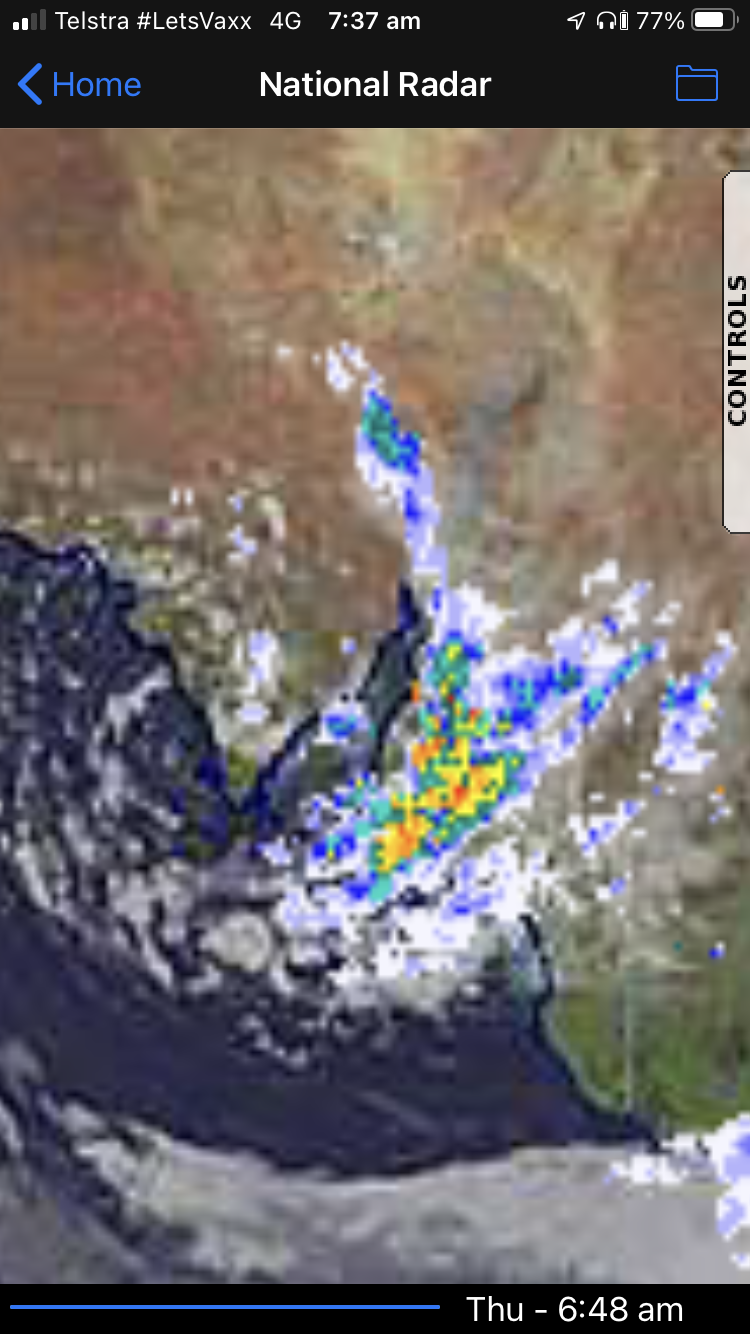 Gotta be some rain in this lot?
Reactions: Parklife

skifree said:
As per normal, promise a sniff then slowly back away so tomoroz is just a sunny repeat of the previous.

Very complex system, seems the low crossed a bit further north west than the models were predicting a week to 10 days ago. Listening to the duty forecaster on the ABC, Low is now weakening and heading east with a smaller low developing about the Murray mouth. Tonight may see high falls about the ranges, with the metro region seeing decent totals and storms to the east of the ranges. Looking at the satellite, it sure looks as though there is a heap of dense cloud heading up from the south as the low swirls it way east.
Reactions: wernerk and skifree 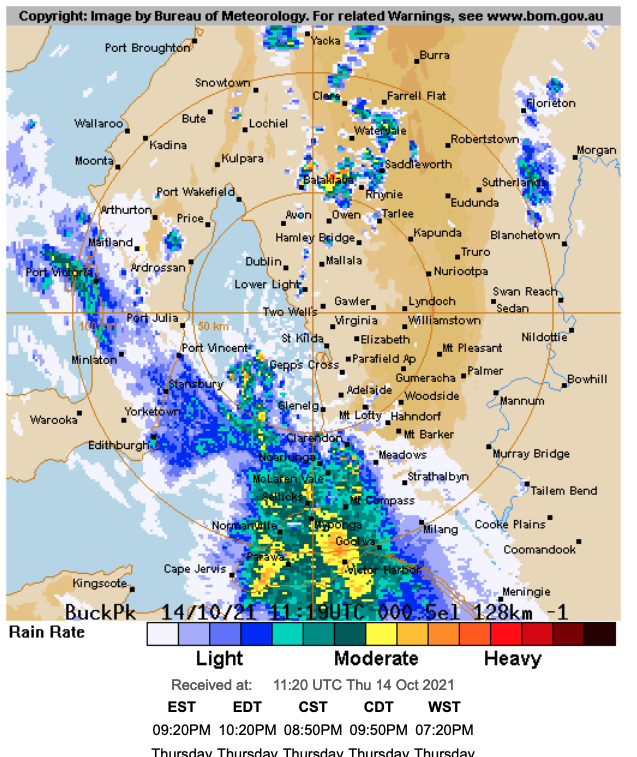 Wow 27.5 mm overnight from that pool of cloud that gradually moved north. It proved to be a solid dumper for the metro region at least; total for the system so far 31mm. Models were actually more accurate rainfall wise 2 weeks ago
Reactions: wernerk

So system total = 22.9mm, with last night's effort quite a bit more from what I was expecting. 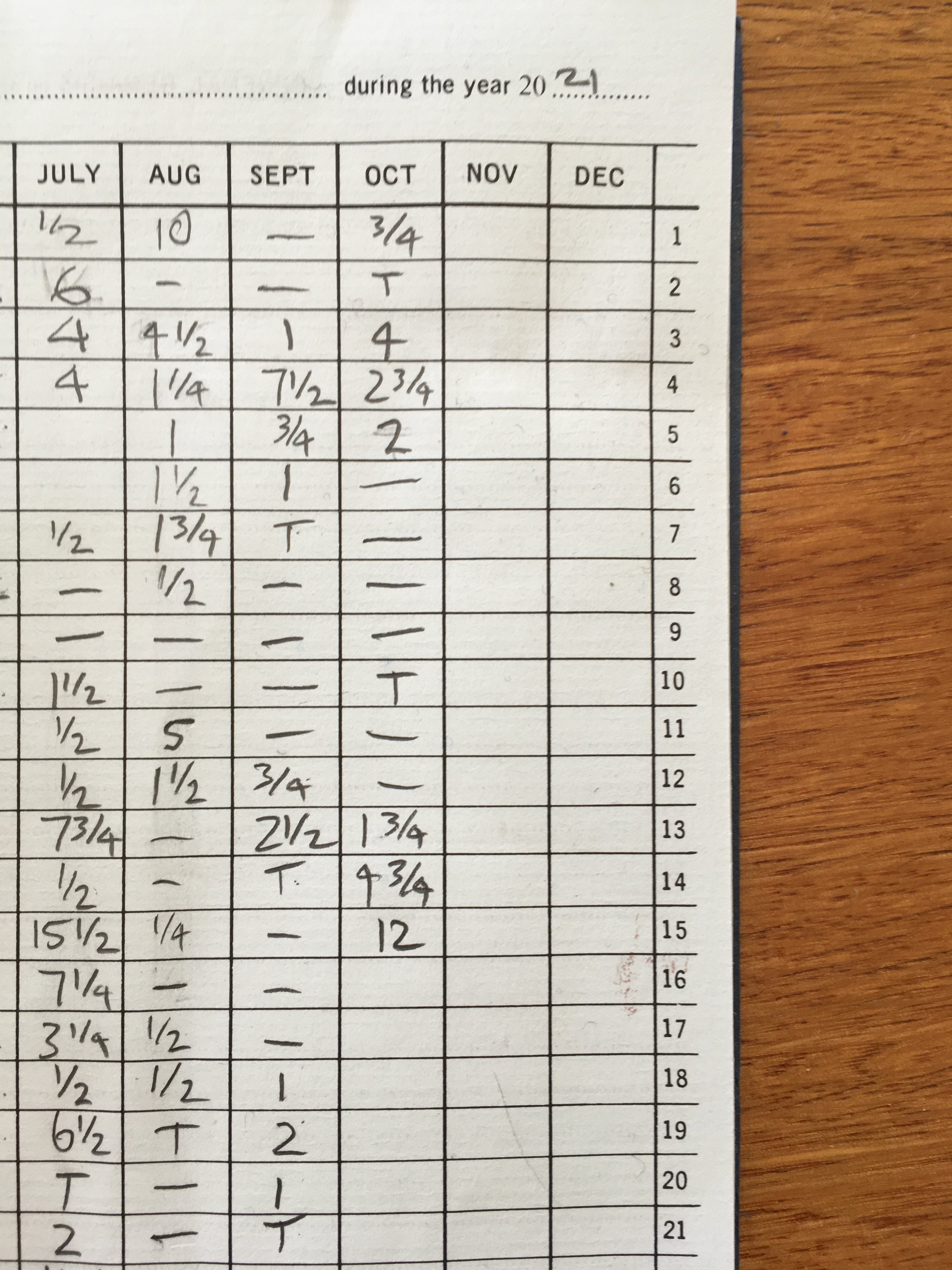 Well we failed to get to the 30 degrees today due to the cloud cover, and that front looks to be a whopper on the satellite although it must be more high based stuff. Nevertheless it still looks as though we are due a rain band at the back end, but the models are not predicting it. At least we are not forecast for giant hail, sometimes I am envious of the easterners with their weather but not their hail. 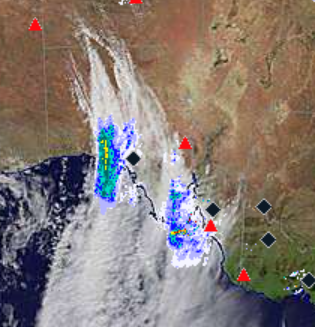 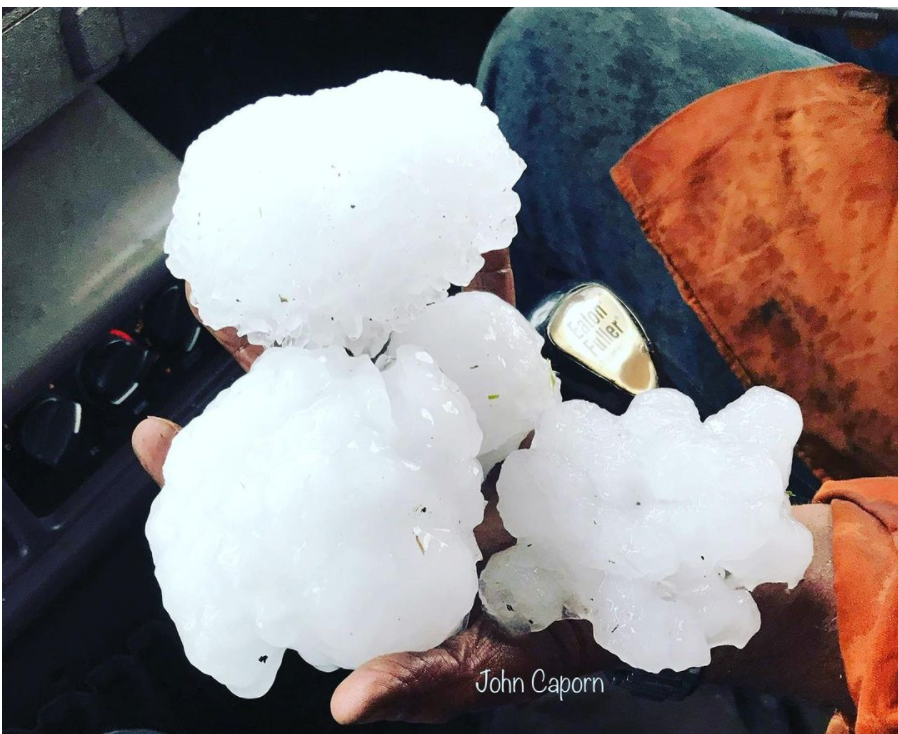 mid level cloud and DPs below zero does not go well for filling rain gauges.
lotsa virga passing over, narrow band on the back edge may get to ground.
very sharp wind swing around 130°on our doorstep about to happen, then DPs should rise enough for a sprinkle.

TH
Reactions: skifree
You must log in or register to reply here.
Remove ads with a
Ski Pass