We can go pretty DEEP in these Snow Weather forums, so here's place to keep all the fiddly information in one spot.

Don't know what a particular meteo topic means? Confused about a Global Model Plot? Don't know the name of that cloud?
Then post a brief intro into what you do/don't know or understand about a particular weather related topic (or resource) with a valid question about what you want to know and your answer shall be answered and/or debated to help all & sundry understand.

Alpine the dark side of snowboarding

Not that it needs to be, but I find if I leave the comment to the skilled crew in the predictions, but as a "lesser individual" add some input into the obs threads, its a good way to go YMMV
Reactions: Richard

Wondering if this little basic tutorial I made with skiers in mind a few years back would help. It was made for an American audience, but I have adapted it to make it more relevant to Australia.

A key concept is the snow level, which is the minimum elevation at which snow falls. You may find maps for the freezing level, which is the elevation where positive temperatures meet negative ones. The snow level is below the freezing level because snow doesn't melt as soon as it goes into positive temperatures; it falls for a few hundred meters until it melts.

Let's look at this surface air temperature map (“2 meter” in this context means “surface”). The temperature scale on the right-hand side lists temperatures in Fahrenheit; they are shown as both numbers and colors. In this map, blue coloring inside the red lines means below freezing temperature (0 degrees Celsius). Therefore, all areas colored in blue can receive snow if there is enough moisture. 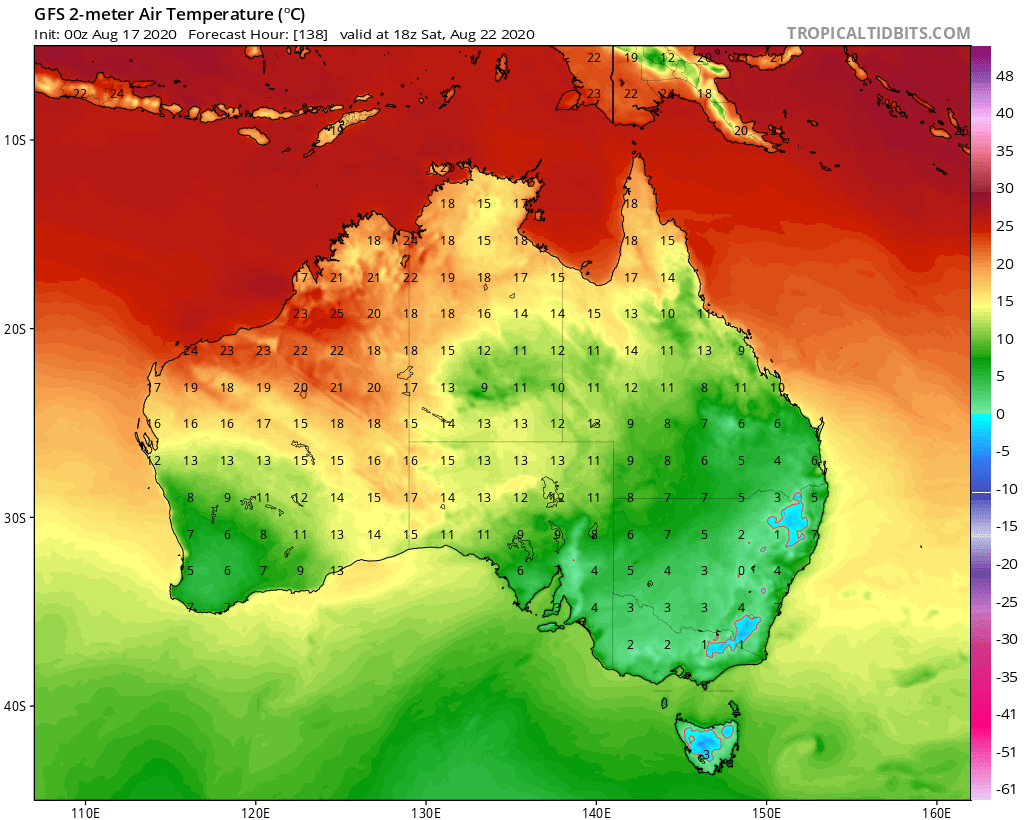 There are many other types of temperature charts, such as the 850hPa and 700hPa charts, which show the temperatures at approximately 1500m and 3000m, that can be used to forecast temperature at the resorts.

You may be wondering what hPa is. It is the measurement of air pressure, which is another important part of weather forecasting. Millibars (mb) and hectopascals (hPa) are used interchangeably as the units for air pressure. The mean pressure on Earth's surface is 1013 hPa: any area of surface pressure above that is called a high (or any airmass of pressure higher than that surrounds it) , and any area of surface pressure below it is called a low. In North America, lows are the driving force behind most snow events. Above is a 500hPa heights and MSLP map. 500hPa heights are on the scale on the right. The dam (or decameters, where 1 dam = 10 m) in this situation is the measurement between 500 and 1,000 mb. You don't really need to understand the full science behind it, but the lower the 500hPa height, the colder it will be. For example, a dam of 582 (orange) is going to be much warmer than a dam of 540 (light blue). A dam of 540 or below is generally connected to snowfalls at around 1500m, depending on other factors in the mix.

The other concept in there is MSLP, or mean sea level pressure. The L’s and H’s signify lows and highs, respectively, with their MSLP numbers. The lower the pressure, the deeper the low becomes. A deep low is generally associated with cold air. The lines around the lows and highs signify the direction of the wind, with winds around lows being counterclockwise and winds around highs clockwise.
Click to expand...

The following is a very widely used weather chart. I personally use this one the most to map out where it is going to rain and snow. It is an MSLP chart, which shows precipitation and the 500-1000mb dam level (explained in the previous article). MSLP stands for mean sea level pressure and shows surface air pressure, which you can measure using a barometer. The black lines around the lows (L) and highs (H) are called isobars and show wind direction and speed. Tight isobars mean it's windy, and isobars that are far apart mean it’s calm. The red and blue lines show the 500-1000 dam height with their corresponding numbers on the line. 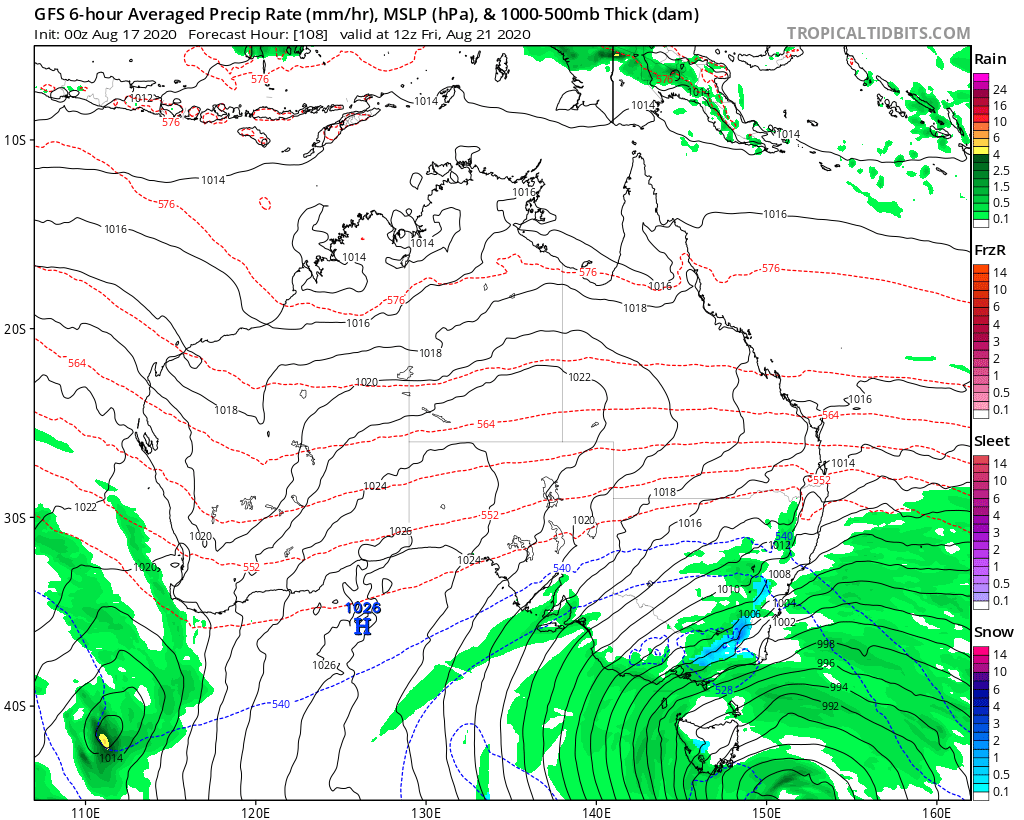 The other major part of the chart is precipitation, which is measured according to the scale on the right of the map.

But what drives this rainfall? Lows are generally associated with the most precipitation because the winds around a low come toward the middle, bringing in moisture, much like a tropical cyclone. In fact, the technical term for a low is a cyclone. This picture is a satellite image of a “Nor’easter," which is a deep low affecting the Eastern United States. You can see the clouds coiling around the low, which keeps the moisture together and then pushes it upward to condense into clouds. Highs are dry because the moisture is pushed away. 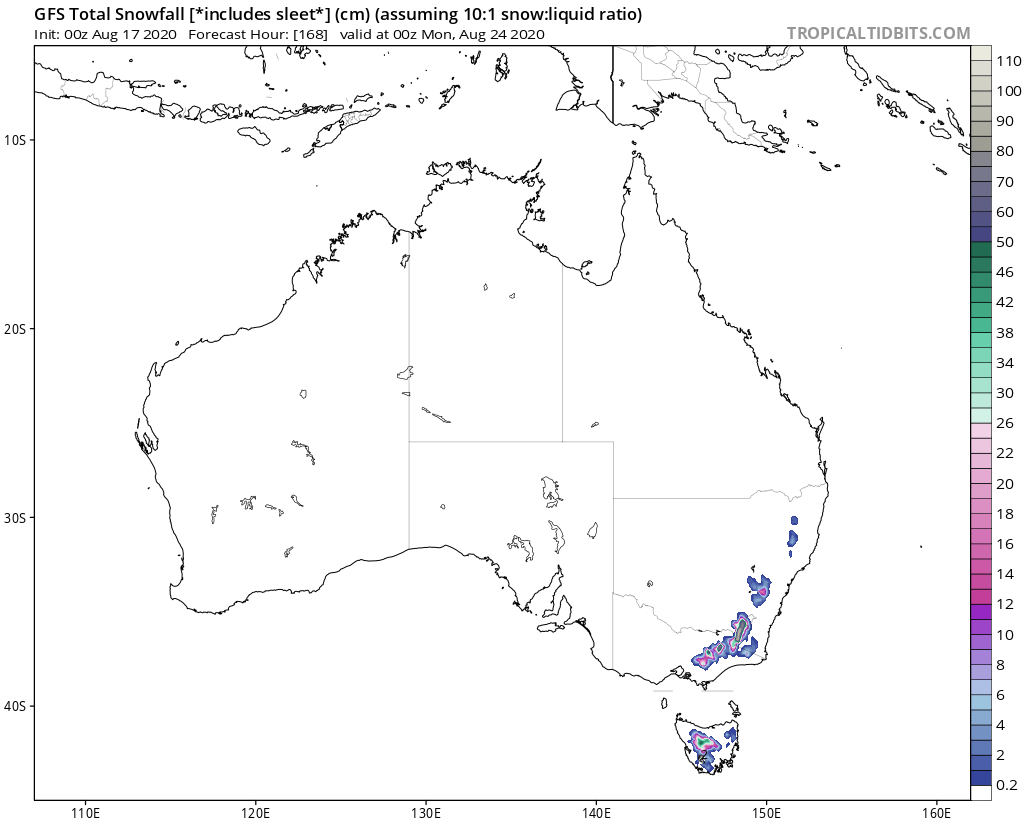 When all the factors add up, you get snow. This map shows how much snowfall in inches, according to the scale to the right, will occur over the next seven days (168 hours).

Here is what to look out for when forecasting snow:


You might have noticed “GFS” in the map titles. The Global Forecast System is the particular weather model that produced the chart; the most widely available weather model, the GFS is run by the American NOAA. Other weather models of note are the Euro model, produced by the European Center for Medium-Range Weather Forecasts (ECMWF), and the Canadian model known as GEM (Global Environmental Multiscale), which comes from the Canadian Meteorological Center.

Just sharing my own internet tootling on the Madden Julien Oscillation. Here is a MJO plot from:
https://www.cpc.ncep.noaa.gov/products/precip/CWlink/MJO/CLIVAR/ecmf.shtml

You all can read up on the general behaviour of the MJO on the internet - BOM has a good youtube vid. What I was lacking was knowledge on how to interpret the graph above. So here goes. From the title it is a forecast of MJO values (using the ECMWF model) for 23 August to 06 Sept 2020. These are the dots within the thick green line (each day is a dot). Red line is last 40 days. Now, the MJO is basically an eastwards moving zone of tropical convection and moisture generation that circulates around the equator. The entire loop around the equator has been divided into eight "phases" (sections of longitude). Australia lies in the middle of phases 4 and 5. So on the above graph, the MJO was both strong and positioned roughly north of Australia between 5th and 8th August. The convection to Australia's north provides a good source of moisture and this fed into the Hand of Faith system discussed here:
https://www.ski.com.au/xf/threads/august-2-8th-the-hand-of-faith.88101/

The MJO then weakened and tracked eastwards across the Pacific Ocean (phases 6 and 7) and currently is over Africa. The strength of the MJO is indicated by how far each day (dot) is away from the inner black ring - the further out the stronger the MJO. So the current MJO forecast has it strengthening a little further over next four days whilst in phase 1, before progressively moving east and being over Australia again around 06 Sept. But next time it returns over Oz, it is currently forecast to be within the inner circle, so therefore not very strong.

Legend from website above: "Phase diagram showing the evolution of the last 40 days of observations along with the 15 day ensemble ECMWF forecast. The yellow lines are the 51 ensemble members and the green line is the ensemble mean (thick-week 1, thin-week 2). The dark gray shading depicts 50% of the members fall in this area and the light gray shading indicates 90% of the members. "

Reactions: Jellybeans, SnowBound, GobrinIce and 3 others

Thank you @Jellybeans, can't believe how readable they all are now, I'll be coming back to your explanations a lot. And @teleroo I was just going to ask that very question about the MJO plot and you've explained it beautifully.

So all I have now is for someone to please explain the '500hPa Longwave'. Prior tutorial threads had links to a video that is no longer up.

Thank you.
Reactions: teleroo and Jellybeans

Noah said:
So all I have now is for someone to please explain the '500hPa Longwave'. Prior tutorial threads had links to a video that is no longer up.
Click to expand...

I'd be keen to see a post explaining all the different types of snow (falling and on the ground) described in some of these threads.

We all know what things like sleet and powder are, but a little glossary of terms like graupel, sastrugi, sago, spring corn and the rest would be great.
Reactions: Jellybeans and POW Hungry
B

Thanks, that is good.
Reactions: POW Hungry

Swiss said:
I'd be keen to see a post explaining all the different types of snow (falling and on the ground) described in some of these threads.

I'll get to this in the coming weeks. Good topic.
Reactions: Swiss and Jellybeans

Swiss said:
I'd be keen to see a post explaining all the different types of snow (falling and on the ground) described in some of these threads.

Would this work, someone wrote this on Wikiski (which is technically part of this site) some time ago?

And while we are looking at old content, here is the previous thread on this subject, with a number of links and tutorials.
Reactions: POW Hungry

What's the primary data source/model chart people look at when estimating the elevation that snow will settle at when the big systems come through?

Or are you looking at forecast soundings or some other (simpler!) spot forecast?

Phil Hart said:
What's the primary data source/model chart people look at when estimating the elevation that snow will settle at when the big systems come through?

Or are you looking at forecast soundings or some other (simpler!) spot forecast?
Click to expand...

But yes, you can also look at soundings for a look at the wider picture (all the layers in the atmosphere).
Reactions: POW Hungry and Phil Hart
You must log in or register to reply here.
Remove ads with a
Ski Pass