Winter is over, only 9 months to next southern hemisphere season!
Reactions: NewTurns, Chaeron, Sir Surfalot and 2 others

Looks like SDS is kicking in earlier than expected.
Reactions: Claude Cat

Sunny, a little breezy, a little sneezy and clear in Melbourne today. We dropped to 4.7 overnight in the city and so far are up to 23, a pretty big range for us.

In the sunshine today it certainly feels like spring which I begrudgingly accept.

I'd like to be heading into autumn again. Let's skip summer altogether!
Reactions: di6loc, AussieWhite, Rick Ross Da Boss and 3 others

Well appears the spring will be short lived anyhow!

Works for those of us looking like staying home this Northern winter.

Looking warm n moist later in the week.
Not quite classic pineapple but will do till we get one.....
Might cancel the planned bc trip.

We need the rain
Pity its not on the weekend
Bathurst!

No rain Sunday, please. I have 300km to ride.
Looking good at the moment.

Claude Cat said:
No rain Sunday, please. I have 300km to ride.
Looking good at the moment.
Click to expand...

Its ok ...its moving into winter
should be cool and clear
Reactions: nfip and Claude Cat

Do you wanna watch a wet race?

I drove right up the Hume yesterday to Gundagai and back. The green tinges are deceptive, not much grass around. A few warm and windy days and she’ll be browned off quick.

For the 2018 comparative predictions table, right at the bottom:
https://www.ski.com.au/xf/threads/snow-prediction-accuracy-thread.78902/page-2

Driest September in over 100 years for Melbourne...

Looking forward to this , lets hope it delivers. 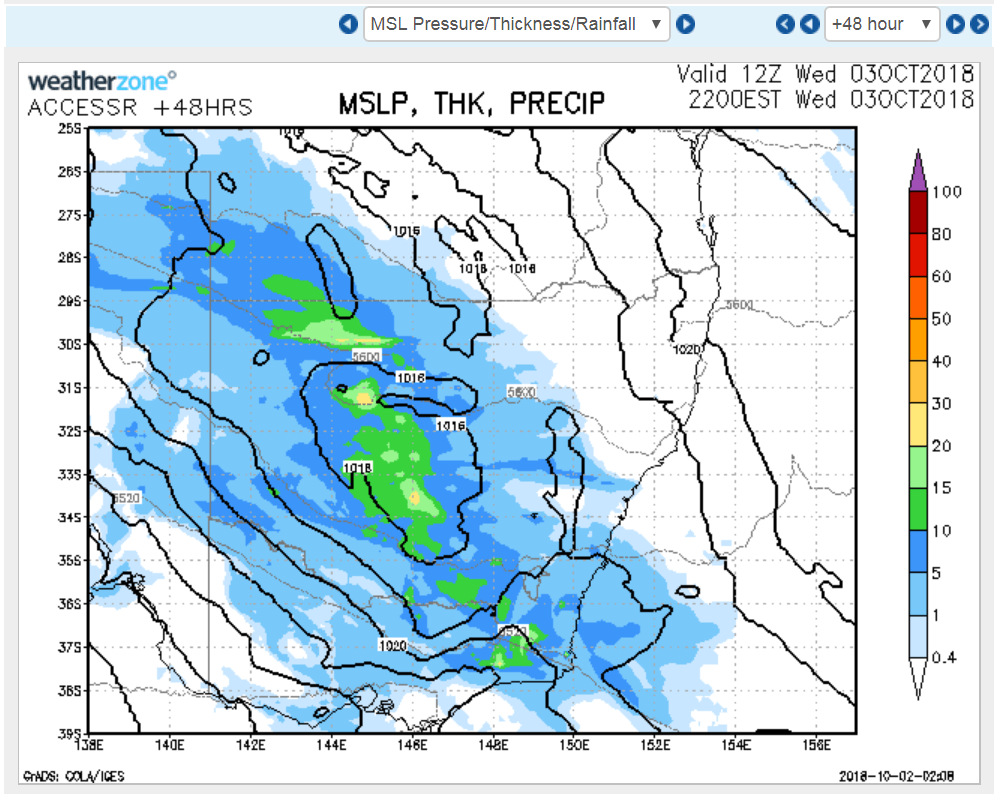 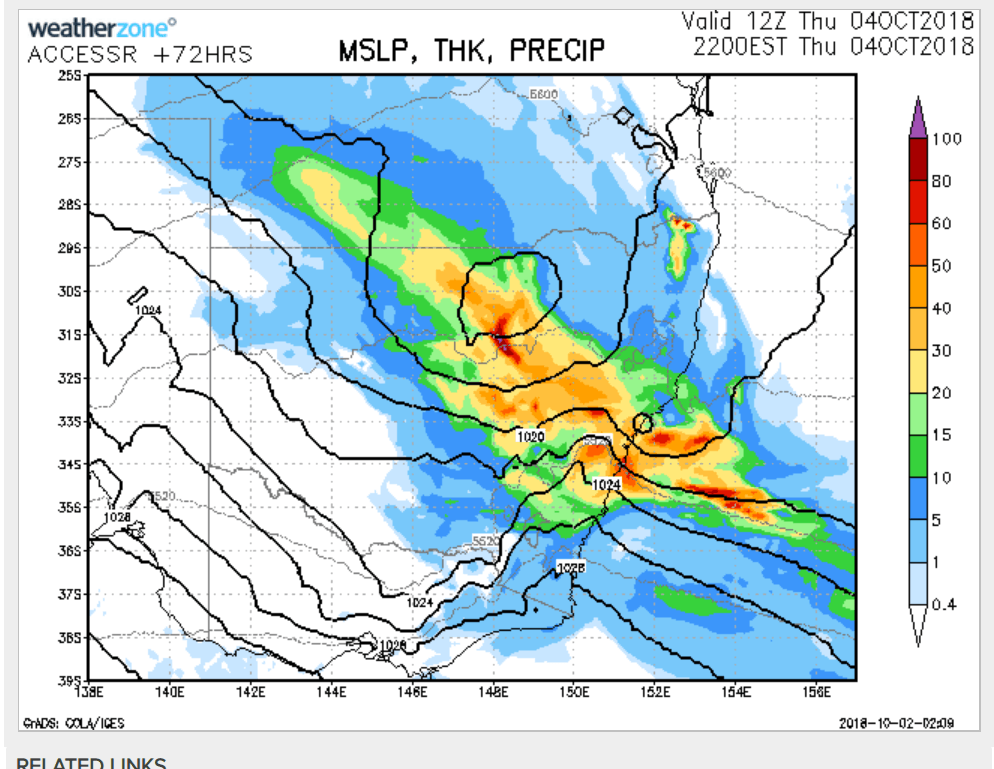 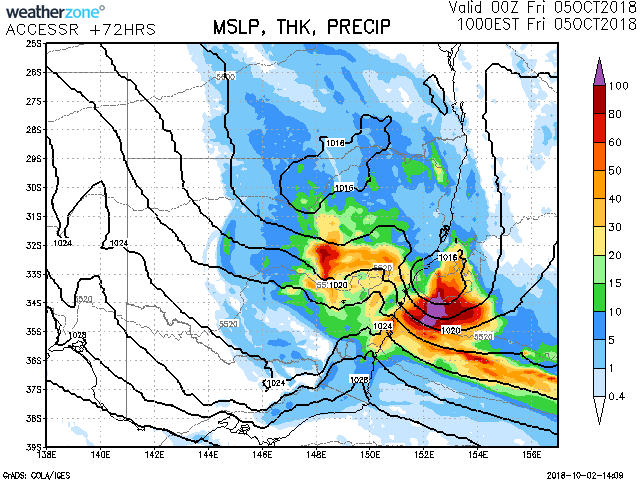 Check these cloud formations. Taken while touring this morning......looks like aliens landing... 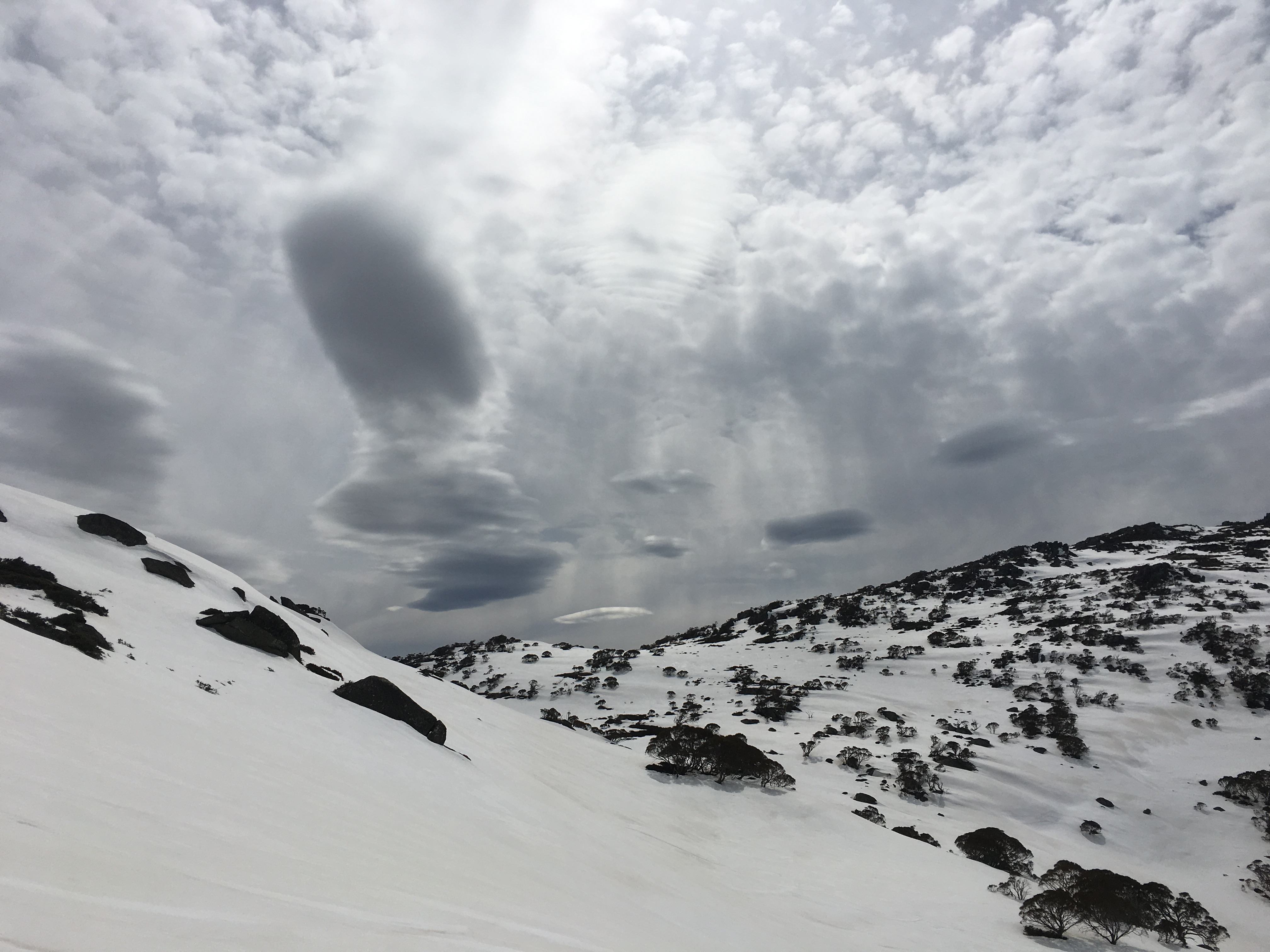 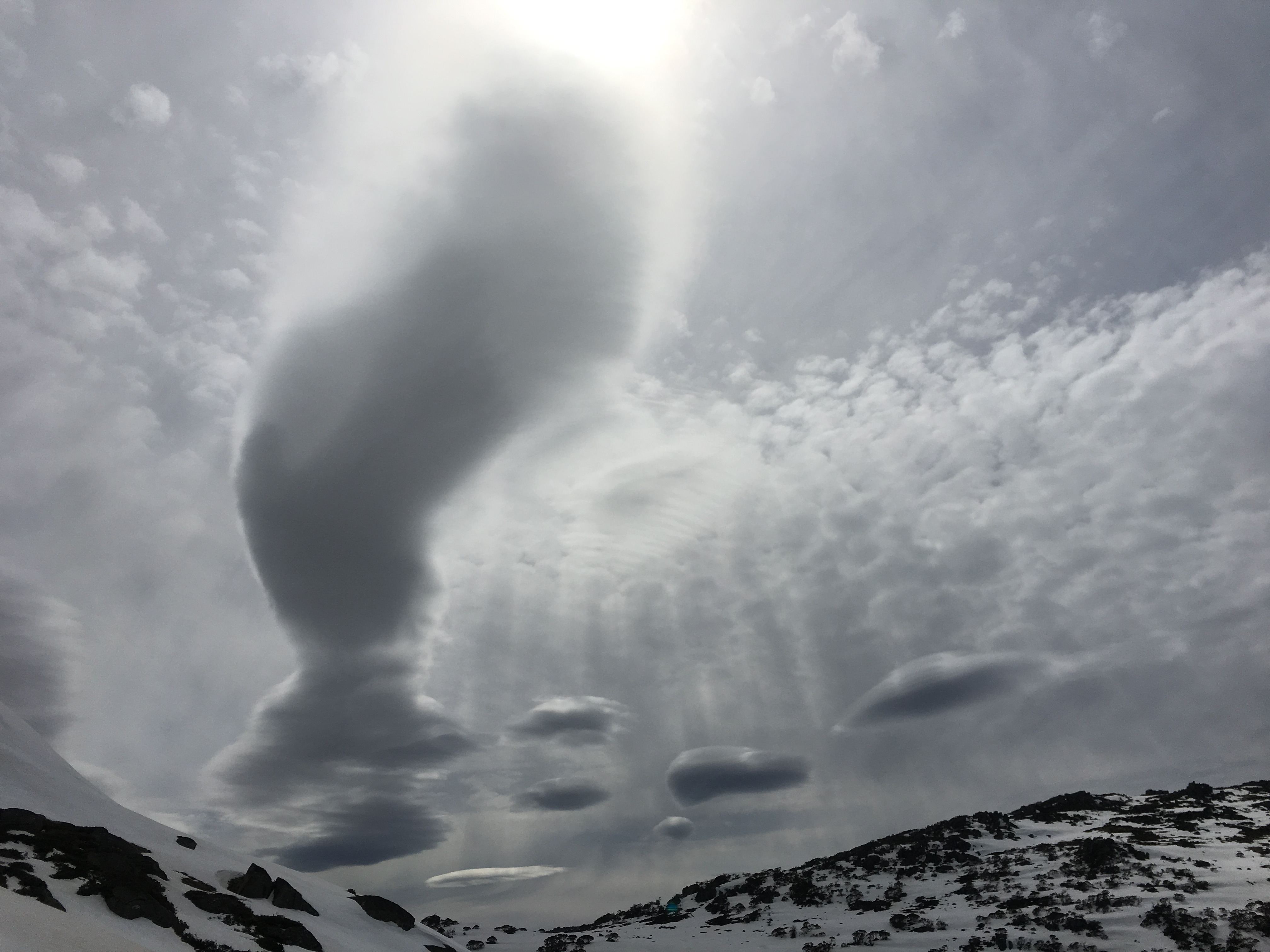 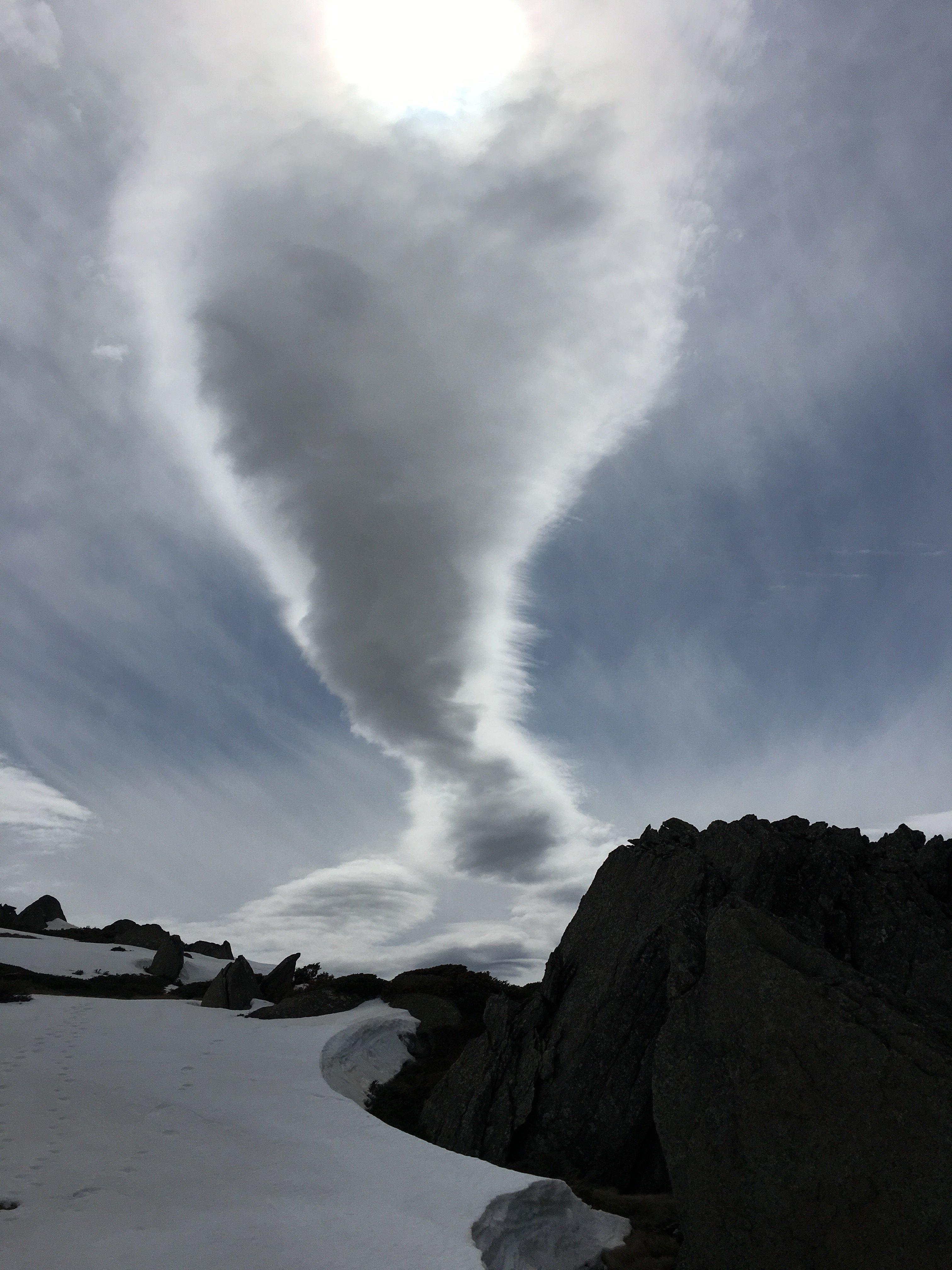 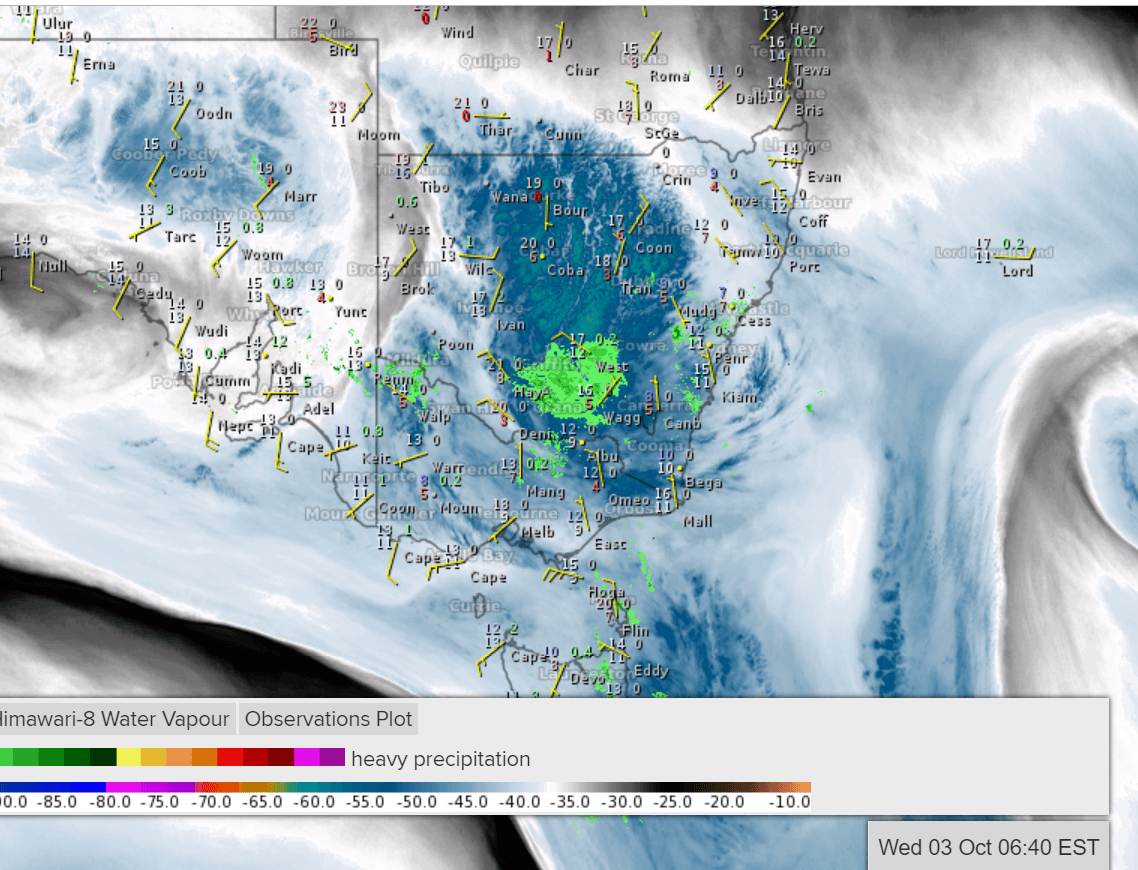 Very jealous, we need some of that down this way in VIC

Warm and Muggy here in Melbourne this morning. Chance of a rumble later today???

Chowder11 said:
Warm and Muggy here in Melbourne this morning. Chance of a rumble later today???
Click to expand...

Great to see plenty of it forecast to fall inland as well.
Reactions: nfip

Chowder11 said:
Warm and Muggy here in Melbourne this morning. Chance of a rumble later today???
Click to expand...

No, I don't think so.
Cooler change from the SW will put and end to that pretty quickly.

Good to see parts of NSW and Sydney looking at getting a good soak.
Vic and Melbourne now desperately needing some with nothing special on the horizon.
Sunday should be OK for your ride CC.
Reactions: Snowy Joey, DiscoStuAU and Claude Cat

BoM predicting some big totals for Sydney and Cenco tomorrow and Friday. Looks like they have doubled their upper totals over the last 24 hours.

I think they are heading in the right direction by upgrading totals given the last few events for Umina ended up well in excess of predicted totals. I think the 21c water temps off Newy and the Mid North coast will, and is having a big impact on predicted totals. Expect lots of localized flooding along the Cenco area if this plays out as expected IMO.
Reactions: nfip

Edit. They just dropped totals back for Friday but Thursday still looks good. Time to track the radar as it's a Low and lows do whatever they want ha ha. Still think the Newy warm pool will feed totals for Cenco though.

Some real nice Flash bang in the west of the state.

decent as Cell also pushing through Wagga
Reactions: The Fallen

The Fallen said:
Edit. They just dropped totals back for Friday but Thursday still looks good. Time to track the radar as it's a Low and lows do whatever they want ha ha. Still think the Newy warm pool will feed totals for Cenco though.
Click to expand... 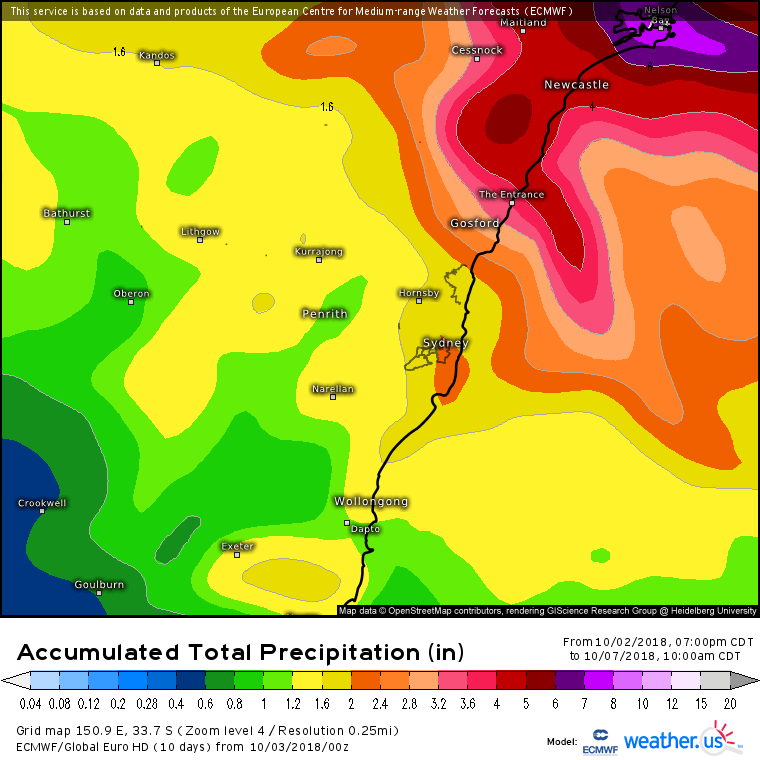 If we get a rain train onto the Illawarra. We'll get some decent totals

Donzah said:
If we get a rain train onto the Illawarra. We'll get some decent totals
Click to expand...

Depends on the inflow.
Ideal is due east
Thats pretty uncommon.
Looks S/E at the moment which should push into the horseshoe around robertson

it's been looking like it for quite few days now and holding pretty firm on its poz.
edit if anything it's looking wetter further down along the coast viz the S/SE you mentioned 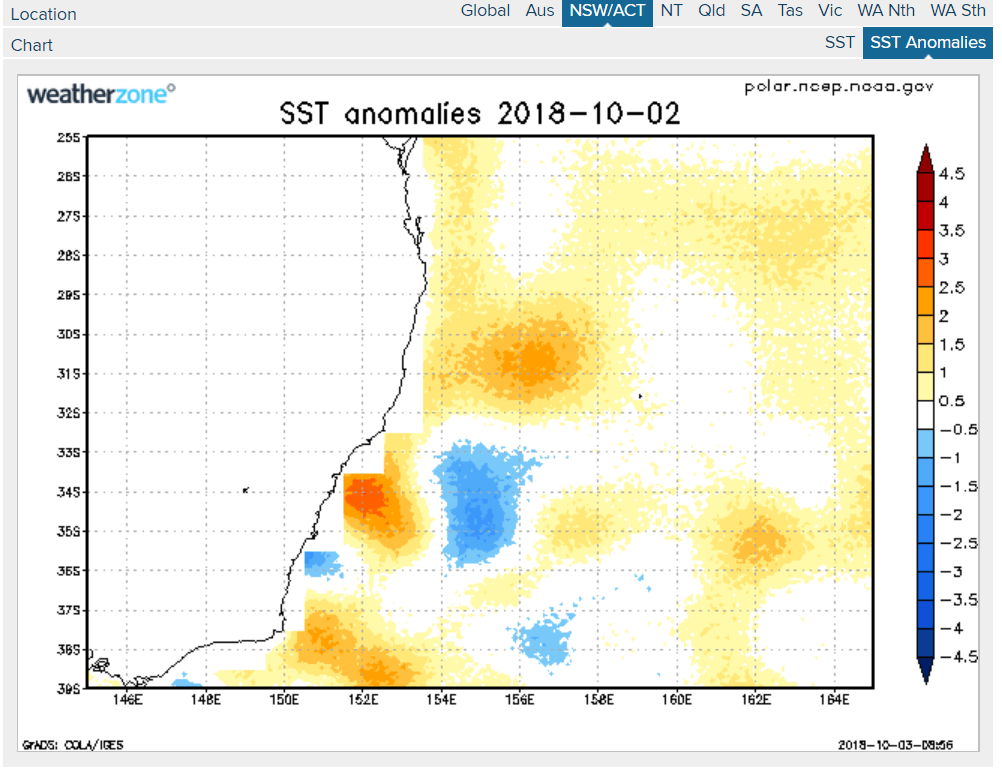 Im not entirely sold on the temp gradients/ shear patterns currently shown on GFS for tomorow night ( looking at 950,850 and 700 hPa contrasts) .

This came in today's batch of press releases


Lilly Pilly fossils reveal snowless Snowy Mountains
https://www.eurekalert.org/pub_releases/2018-10/uoa-lpf100318.php
University of Adelaide
Leaf fossils discovered high in Australia's Snowy Mountains have revealed a past history of warmer rainforest vegetation and a lack of snow, in contrast with the alpine vegetation and winter snow-covered slopes of today.

University of Adelaide research, published in the American Journal of Botany, describes fossils of the iconic Australian tree, the Lilly Pilly, prized for its glossy, green leaves, white flowers, and red or pink edible fruits, and commonly planted in streets and gardens across Australia.

Researchers identified fossil Lilly Pilly leaves recovered from old gold mining pits near the historic town of Kiandra, 1400 metres above sea level in the Snowy Mountains of New South Wales. The fossils are preserved in ancient lake sediments, overlain by basalt rock, deposited by lava flows that erupted during some of the last stages of uplift that produced the Eastern Highlands about 20 million years ago.

"The Lilly Pilly was a traditional food source for Aboriginal peoples and early European settlers and is still an important food source for many native animals and birds, as well as used for making cakes and jams," says lead researcher Myall Tarran, PhD candidate in the University's School of Biological Sciences.

"But despite being such an important and iconic plant, no convincing fossils have ever been described in the scientific literature, until now.

"These fossils add to growing evidence that in this region about 20 million years ago there would have been temperate rainforest. The climate was warmer and wetter, perhaps analogous to the modern day Atherton Tablelands in North Queensland.

"There would have been no, or very little, winter snowfall and the alpine zone, as we know it in the Snowy Mountains, was not yet established."

Mr Tarran says it's possible the lack of snow was a result of continuing tectonic uplift, but higher atmospheric carbon dioxide levels were likely to have played a role.

"Uplift still hadn't fully finished in the region at that stage, so perhaps this forest was actually growing at a slightly lower altitude," he says. "But we also know that atmospheric carbon dioxide levels, and therefore global average temperatures, were much higher during this time."

"The fossils provide us with a window into what the Snowy Mountains looked like in a much warmer world, and help us to think about what a warmer world will look like. For us here in Australia, that might mean no snow in the mountains."

Could change it to the fire season thread...

is glass half full thread.
sds is alive n well.
i observe some very usefull rain out is western and central western NSW.
here on the coast has been light but steady for 12-18 hrs.
heaviest yet incoming this afternoon as the L circulates more moisture from the relativeley warm waters
Reactions: Donza 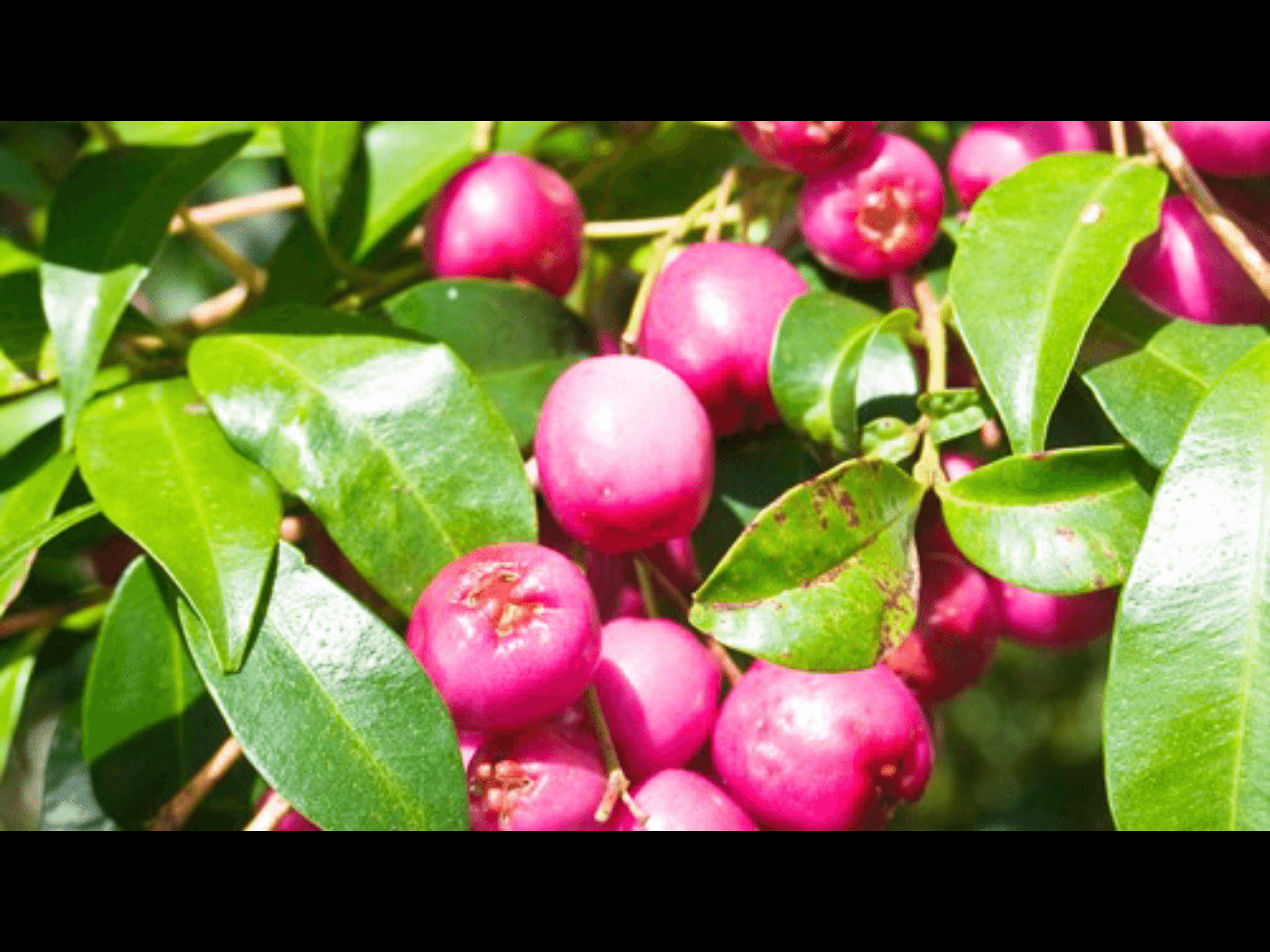 There you have it....we are on our way back to the future....sorry we mean the past....
The Snowy Mts to become Lillypilly Land once more!Succession proceeds....we are going back in time!

Good to snack on when doing a Kto K on the Mt Bike....

12ml and counting for Umina. It's a good start but we always do best once the wind swings SE so the best should still be left to come.

The low looks to be still on track to cross the coast around Newy so it could get nasty overnight. Pasha Bulka MKII or a Colloroy repeat on the cards?
Reactions: nfip, Untele-whippet and Claude Cat

Looks like the southerly has hit Sydney with 32kph out of the SSW. This should start to feed the beast. Mid level NW sliding rain meeting Southerly to SE surface winds. Should be game on shortly
Reactions: nfip

yup. same on South Co.
14mm on my aws, 14 degs and hasnt let up.
radar and sat has been checked regularly watching this one when it hits the water with interest.. 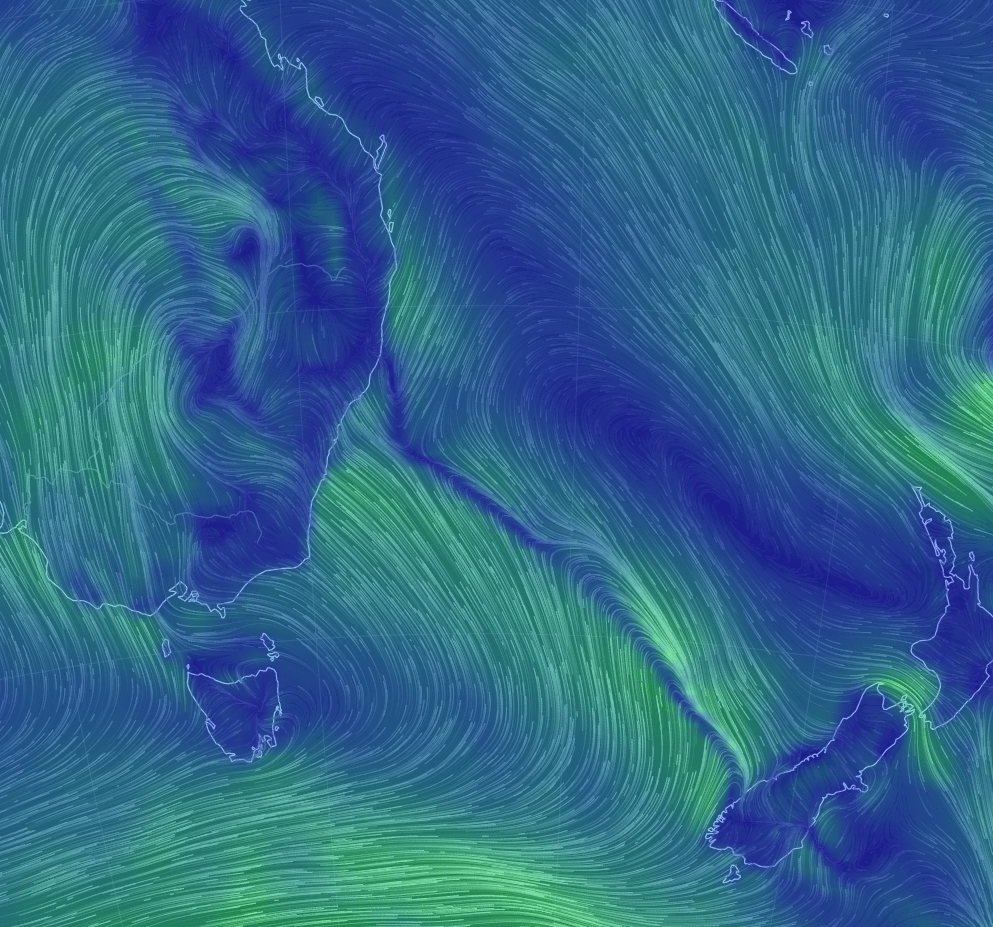 and da chart to match

Reactions: Kletterer and The Fallen

Heavy stuff starting to push in from the SE just south of the Gong. Time for the rain train Donz.