There are only so many bobsled runs that you can do!

Townsend said:
There are only so many bobsled runs that you can do!
Click to expand...

My usual pattern is to purchase a winter pass in September then book accommodation at the beginning of the year.
The most recent season I did the same but ended up without the season lift pass.
I have no interest in booking many stays without a season lift pass.
At daily lift rates I am more likely to have a year off and save those pennies for another year, or take those pennies to try another resort.
Reactions: crackson and Annabuzzy

I remember when my middle son ventured out in the bobsled for the first time by himself (I think he was 9 or 10). Went Ok until his father came belting around a bend behind him and collided with his bobsled, trapping his finger and throwing him out. Badly swollen finger and a refusal to ever go in the bobsled again was the result (Note: I LOVE the bobsled ).
Reactions: LaNeige, Billy_Buttons and Jonathan_P

Re lift maintenance schedules
-Kosciuszko Express runs throughout tge entire mountain bike season. Shuts down for a month either side. During maintenance, Snowgums runs instead.
-Gunbarrel usually runs throughout December and January, and most weekends. Thredbo website sats Gunbarrel will be open more this year.
-Merritts is supposed to open during summer. Unknown when. Might not happen until the restaurant is rebuilt.
Reactions: Jonathan_P

Quietest closing weekend I have ever experienced, snow or no. Some places already closed. Mind you, they ran out of snow shoes in the hire, plenty of people doing the Kosi walk, even with the wind. Had dinner at the Denman, and maybe last one ever at Black Bear, though as someone said, they have had like 7 closing parties by now, but it is still there. Most people I spoke to did alright during the season, so I think the way they went worked, and if the snowmaking had not broken, it would have been normal turnover from less people for many.

So good catching up.
Reactions: Telezacski, Kash, Sage O and 11 others

Just realised this was the first season in 17 years I haven’t skied Thredbo
Hopefully the ticketing system and Covid get sorted for next season.
Reactions: crackson, LaNeige, Kash and 3 others
A

That's 'ma Lord Buzzy to you

Untele-whippet said:
Just realised this was the first season in 17 years I haven’t skied Thredbo
Hopefully the ticketing system and Covid get sorted for next season.
Click to expand...

2 days for me ergh
Reactions: climberman

Annabuzzy said:
2 days for me ergh
Click to expand...

Same, was heading for 7 maybe a couple more but fractured wrist but an end to that. Here's to good 2021!

Annabuzzy said:
2 days for me ergh
Click to expand...

Tried for 2 but there was insufficient snow . Enjoyed dinner and being in the village though.
Reactions: crackson and skiflat

I got 3 days in, 2 of them after lots of very heavy wet snow. Managed top to bottom on funnel web so I guess that's something.
Reactions: Sage O

Went down for one day got no love due to windhold, first season I’ve missed since I worked on the hill as an 18 yo in 1988. Did make several runs at DHG tho with lift from mate from lower carpark to upper. Probs about 40m vertical per run. At Perisher they call that top to bottom!
Reactions: Alleve, Undies, Telezacski and 8 others

Went for 3 days, got 2 with a wind hold day but they were excellent days (first week of Sept). Really grateful to get there this year. No ski school forced us to take the kids with us around the mountain and it paid off.
Reactions: Jonathan_P, Sage O and Untele-whippet

That was the first season I missed at Thredbo since 1990. I stayed overseas that year. Whoa!!
Reactions: Ramshead and Untele-whippet
P

Only got in a couple of days this season even though I booked more which I had to forfeit due to an illness in the family. They were good days though.
Reactions: Jonathan_P

First one I've missed since getting back from o/s in 2008. Zero days ...
Reactions: climberman and Untele-whippet

I managed 2 days this year with the @zac150 clan. Heavy wettish snow one day, and rain the next ..... Maybe next season I can do better?! Still waiting to try out FunnelWeb and Cannonball.
Reactions: Ramshead and Sage O

Feeling for you and the other Victorians who missed out totally on the ski season this year
Reactions: LaNeige

Melbourne melancholy!
Freedom and a short black on me next year I hope for you sir
Reactions: LaNeige

For those that missed this season...overall, it truly was the season not to cry about missing. Yes, there were some good days, but not too many. Think 82, 06 or 13.
Reactions: cornice11, Sir Surfalot, skiflat and 2 others
C

Long weekend in Thredbo was dead! Did catch up with @telecrag in his natural environment which was nice.

It’s kind of funny I love Thredbo when it’s dead, just a nice place to wander about and chill.

as for the season we got 13 days, spent less than the Season pass and we’re pretty happy. I seriously hope they keep the ski lines next year, so much better.
Reactions: telecrag, jonathanc and climberman

3 days for me. Even though it rained on one of them, and the bottom half of the mountain was closed, I still had a ball.

The skiing at Thredbo is better than Perisher, but Perisher is better in a bad snow year such as this. I just need to be able to live there and have passes for both.
Reactions: crackson, telecrag, Sage O and 1 other person

20 something days, all good quality snow bar one sub optimal when just felt the need for solitude.Live local, work flexible, pick the eyes out of the season/events - the future of skiing in Oz.
Reactions: crackson, DPS Driver, climberman and 1 other person

9 days, all BC, did ride the chair to the top twice. Still hope to go drifting though. First time I haven't done a resort day since the 80's.
Reactions: DidSurfNowSki, Untele-whippet, crackson and 3 others

Billy_Buttons said:
For those that missed this season...overall, it truly was the season not to cry about missing. Yes, there were some good days, but not too many. Think 82, 06 or 13.
Click to expand...

2013 for mine, minimal snow till August and what did come was a soggy easterly, a short stint of decent westerlies bringing snow depths creating the impression of a much better season than it was, early spring. Full Stop.... but worse because of covid and broken s/m
Reactions: telecrag

Between COVID and the weather, I managed to get seven days in, though three of them were not really very enjoyable and one was basically unskiable.

There was one really good day I managed to get, was the Sunday in mid-Aug after the only really big dump we had. That was a great day. Everything skiable. Lovely.
Reactions: Untele-whippet
C

I've met every single self appointed legend there and they are seriously disgusting people.

I've met every single self appointed legend there and they are seriously disgusting people.
Click to expand...

Well if you've met the self appointed legends then you've clearly not met the good people at Thredbo. None of which are self appointed.
Reactions: Townsend and crackson

Correct, I appoint them!

Or is that anoint?
Reactions: DPS Driver

telecrag said:
Correct, I appoint them!

Did I just stumble into a George Pell thread?
Reactions: Alleve, DPS Driver, Scoober and 3 others
C

DPS Driver said:
Well if you've met the self appointed legends then you've clearly not met the good people at Thredbo. None of which are self appointed.
Click to expand...

A few good people doesn't makeup for the damage caused by nazis and cokeheads.

Donzah said:
Did I just stumble into a George Pell thread?
Click to expand...

you haven't met me, I think I am a bit of a legend.
Reactions: Alleve, crackson and climberman

Still funniest line in that, "I cant **** an ape!"
Reactions: climberman

Bit of a breeze on top of thredders gusting at 120km

Looks like a full blown blizzard from my side of the lake.

Ripping winds and totally socked in mountains all day.

The low lands are happy with the rain and the warmth.
Reactions: crackson, Myazma, Sage O and 1 other person

dawooduck said:
Looks like a full blown blizzard from my side of the lake.

Ripping winds and totally socked in mountains all day.

The low lands are happy with the rain and the warmth.
Click to expand...

Small bonus. Had some credit in My Money from days refunded due to the early winter season closure.
Non bonus. 2020 is a $3k year for passes skiing/riding.
Thredbo, 'I Love it'. 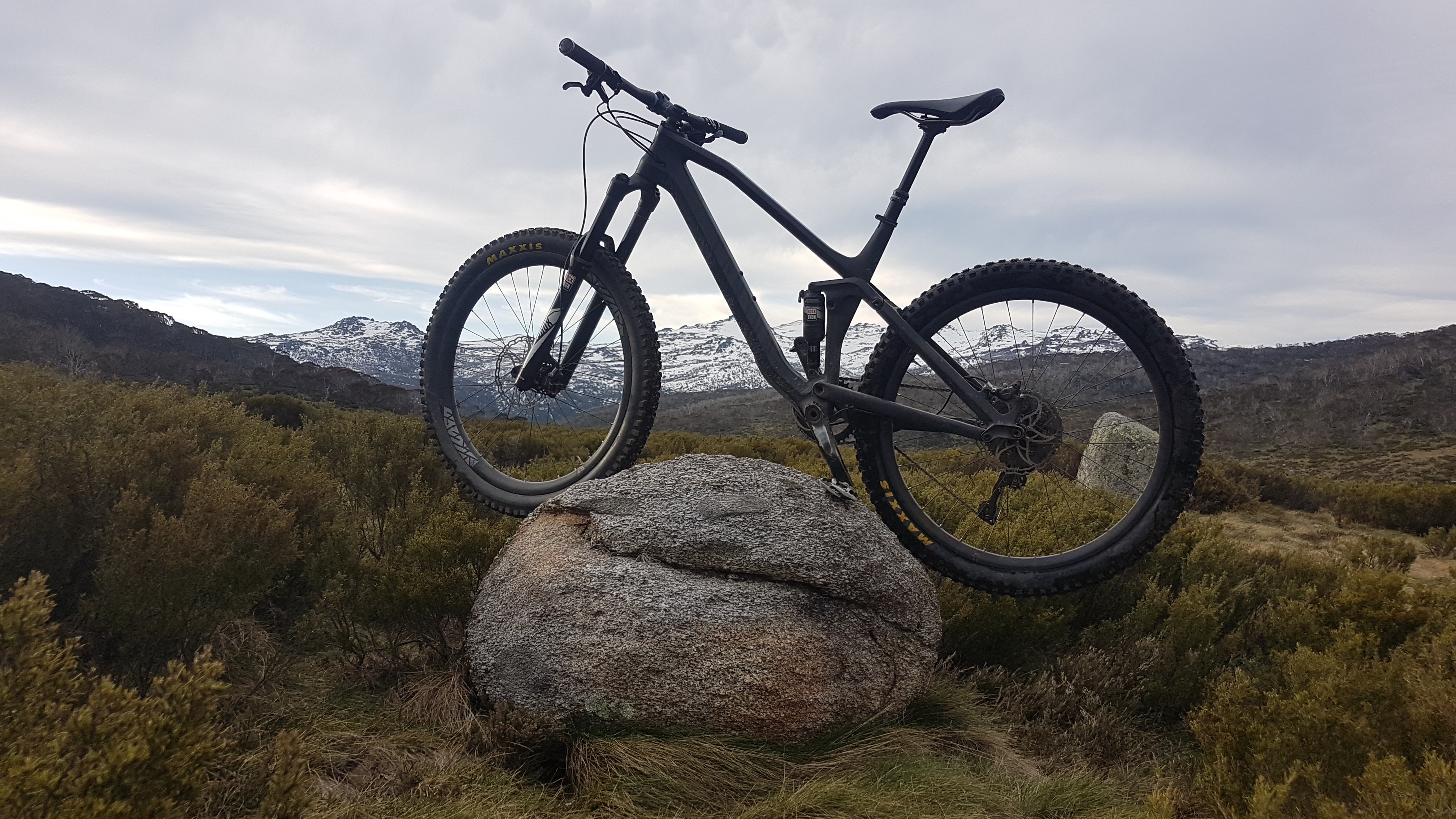 No MTB season pass available after 4.00 PM Sunday.
I asked, they replied.
Slightly weird marketing to me given the Covid uncertainty.
Lock in for the unknown or suck it up.

Untele-whippet said:
No MTB season pass available after 4.00 PM Sunday.
I asked, they replied.
Slightly weird marketing to me given the Covid uncertainty.
Lock in for the unknown or suck it up.
Click to expand...

The held a successful winter, why not summer?
Reactions: skull

Billy_Buttons said:
The held a successful winter, why not summer?
Click to expand...

Totally different numbers in summer so no real Covid distancing dilemmas.
Why not have an early bird season pass ending on Sunday then a full price pass for procrastinators in a summer of uncertainty.
How about a full 7 day per week season pass and an alternate week day season pass or a weekend season pass?

Have you ever been there during Xmas-January period? The crowds have been huge.

Billy_Buttons said:
Have you ever been there during Xmas-January period? The crowds have been huge.
Click to expand...

Yeah for 5 days.
Most crowds are walkers/sightseers.

Billy_Buttons said:
Have you ever been there during Xmas-January period? The crowds have been huge.
Click to expand...

Yes. Large crowds over the holidays, which is great for Thredbo but the total season is November to April.
Nov, early Dec, Feb, March and April week days are when Thredbo needs to sell tix.
It’s great riding empty trails then but what a wasted revenue black hole.
Mt Ruapehu season ski passes for 2021 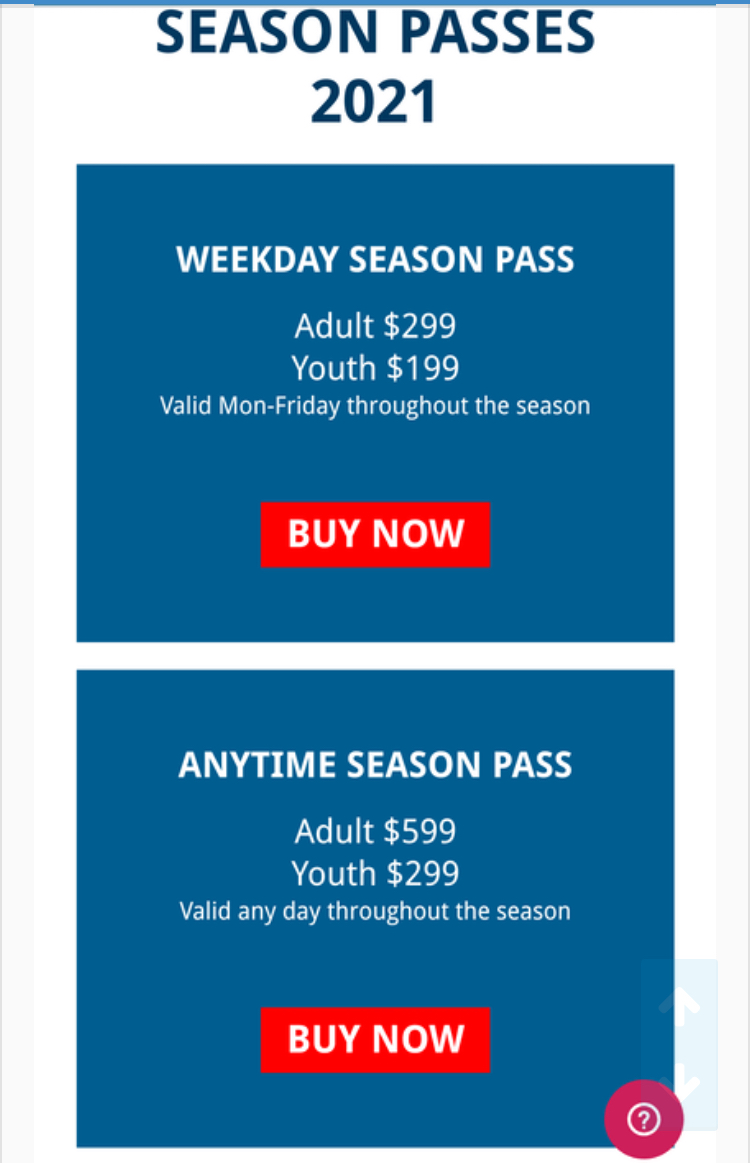 T
Accomodation up for grabs

driving from Sydney to Thredbo