Where we left off...

Mt Skene with a large lens

There are no high mountains above the treeline further west than Buller and Sirling. Unless you mean Buller and Stirling taken from McDonald, Eagle's Peaks or the Governors.

You are all missing the clue on r h side of frame... taken from an aeroplane or chopper.

No its on the ground, the thing on the edge of frame should be a tree, I was shooting between a couple to get the shot.

Surprised by the amount of detail picked up at a distance of 60km, was rater hclear.
Last edited by a moderator: Nov 14, 2013

looking at SW slopes of Buller and Stirling from Jubilee ridge, Lake Mountain?

teletubby's will do, actually from near the old Boundary Hut at the north end of the trails looking over the ridge that runs down from Mount Bullfight (Federation Range).

pics from just before first falls this year

looking NNW from where photo was taken looking S from where photo was taken grrrr...someone please tell me why the images are appearing so small? sorry, the originals are large. what have i done?

Try taking the /tn/ bit out of the url:

My first thought was The Crosscut Saw, but now I'm more inclined to say The Main Range from somewhere like The Sentinal or Wato's Crags.

First guess was in the correct state Bogong. I can see the likeness to the Sentinal area though.

Aaargh! I now know where it is for sure and it's NOT King Spur on Mt Koonika. Oh well, it's too late, I've had my go

Going out on a leg... North Razorback somewhere?

Near the top of the west rigde of buller.

A clue may be the spur on the skyline in the S looking pic. Frazels is in the general area, at least on the same map. Keep trying Bogong, you're good at this stuff

Looks like dimatina spur in the middle ground of the 2nd pic. So Avalanche ridge.

Yes Sidetrack, Diamentina spur is in 2nd pic. Avalanche ridge is very, very close. Pic taken at around 1720m ascending East ridge (next one N from Avalanche?). 1st pic is looking upward toward the knoll/peak between Feathertop and North Peak

Did you take any packs with you TT, or just a day walk? Looks latish in the day

Frazels, I was a mule for the day! I took a mid-size pack with camera gear, clothing, gps, food/drink etc etc. It was late arvo when we got back to the summit ridge. Ascending with a pack was easier than descending!

This was to explore and a chance to scope the NE runs from the summit area, North Peak and the spurs that run down to the Kiewa River West Branch for this winter. Looks awsome, but the deep gullies are way too serious! I'll stick to the spurs and bowls. The NE spur off North Peak looks very open now after the fires, all the way to the river.

Well, it's been a couple of days since the last post, so I assume Sidetrack doesn't have a happy snap for us. Anyway I want to try posting an image in this rather interesting new style moosh. Sorry if I'm treading on any toes. 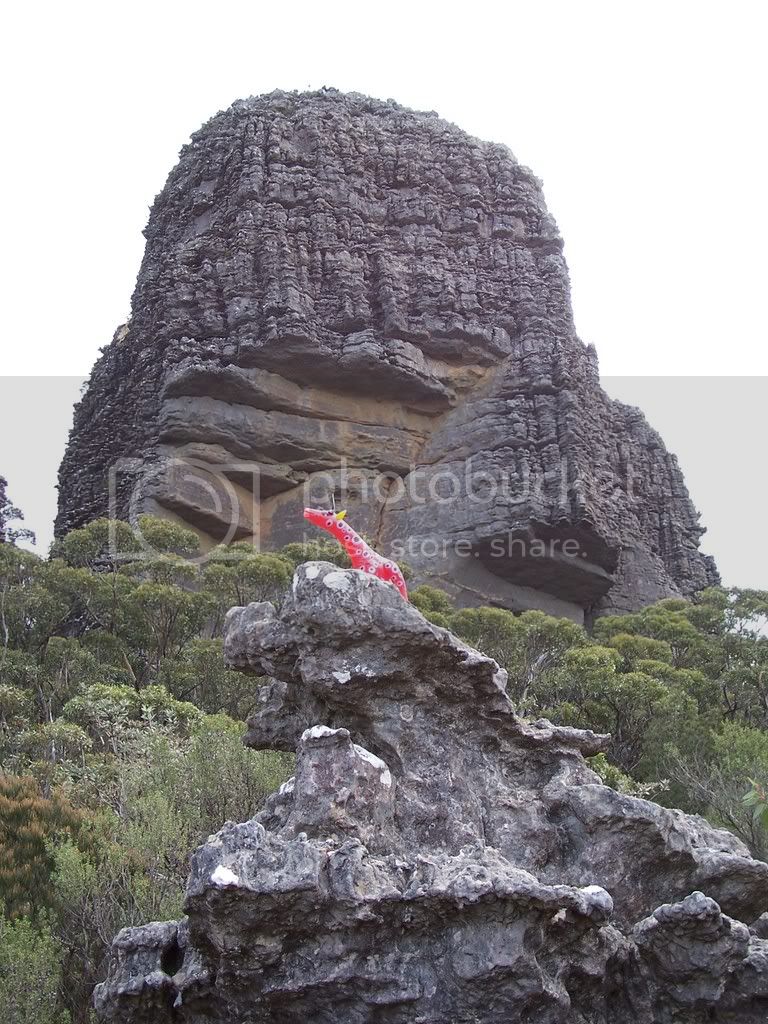 Guys you do not have guess a pic to post one. Just wait till the current one has been guessed and go for it.

Im thinking the Grampians but cant get closer than that.

Cannot remember the name of the peak (probably called tower hill or something) but it's just to the west of the road you go to like this:

South from Halls Gap, near Lk Bellfield, turn right up the sealed road. Near the top of the range is a track junction with a dirt road heading downhill that passes the Bundaleer cliffs on the right. Continue to the bottom of the hill and it becomes a 4wd track (just) and starts to climb again. This outcrop is on the right about here.

Looks vaguely like The Fortress, but can't pick the angle.

Isn't that Australian alpine giraffe a little out of its natural habitat?
Reactions: Chaeron

My original thought was the chimney pots from the other side, but I think alex has it? Its been a while....

It's The Fortress in the Victoria Range of The Grampians, so Alex C. gets the cigar. It's a brilliant area, with relatively easy access and none of the pack hauling and deep bogs you get in Tasmania if you want to see equivalent hills down there.

Sorry about the giraffes, they are a bit out of control on the Victoria Range. You almost have to beat them off with a stick and then they instinctively climb to the highest point nearby.

Someone enquired about The Fortress and has since deleted their post. I wrote this in reply so, I may as well add it to this post.

The Fortress, is in the Victoria Range on the western edge of the Grampians. It's a long way from Hall's Gap, and even the spot where I took the photo is a long way up a steep hill, so not many people go there.

There are some awesome climbs on the Fortress like Passport to Insanity, some are over Grade 30. Two of my friends managed to get to the top 8 days ago without ropes, but they took some fairly dodgy risks and jumped between jugs. I cowered down at the bottom and tried not to look. Instead I went giraffe hunting.
Last edited by a moderator: Dec 26, 2013

Didn't guess it... but I can't guess any of them right.

Some news.
This will be the last "where is this thread".
Admins have told us there is no 10 page limit any more.
W

Bogong said:
Well, it's been a couple of days since the last post, so I assume Sidetrack doesn't have a happy snap for us. Anyway I want to try posting an image in this rather interesting new style moosh. Sorry if I'm treading on any toes.

I free climed this hill a couple of weekends ago (albeit from the other side). Still it was a climb (not a scramble), and I was pleased to get to the top of the highpoint of the Fortress!

Not much of a cairn on top so I gathered a few rocks together myself!
Last edited by a moderator: Nov 17, 2013
I

Maybe a Cambodian temple, though I dont think they have Giraffes over there
I

Shrek said:
Some news.
This will be the last "where is this thread".
Admins have told us there is no 10 page limit any more.
Click to expand...

Do you mean that this thread will grow indefinately ?
Last edited by a moderator: Nov 17, 2013

Around Mt Murray area lookng west, is that the Wongungurra down to the left?

Nope. photo taken at about 1650m ASL. Skiiable runs down LHS on a half-decent season.

Shrek said:
Some news.
This will be the last "where is this thread".
Admins have told us there is no 10 page limit any more.
Click to expand...

Do you mean that this thread will grow indefinately ?
Click to expand...

Until we are instructed otherwise, yes.
Last edited by a moderator: Nov 17, 2013

A disused toolshed of respectable proportions"

Is it in the Blue Rag - Mt Freezeout area?
A

What about Round Mountain looking East over the Tumut River?

Its been a few days, so i'll put a big tip in.. It was taken about 200 metres from a ski run at a resort. Name the Ski run or the gully to the left (dont think the ridge has a name).

wild guess - from near the drift and av gully looking to Dargo High Plains???

Yeah Currawong close enough. Taken from the ridge that spurs off "Easy Street" at Big D Hotham. The gully to the left is Loch Glen. Nice area... found $10 bucks in the Loch Glen. Looking out over the Dargo High Plains, with the Dargo River in the foreground. Next pic.

I think you're being generous frazels, but I don't have to be asked twice Last edited by a moderator: Nov 11, 2013
You must log in or register to reply here.
Remove ads with a
Ski Pass

L
Posting pics for "where is this?"